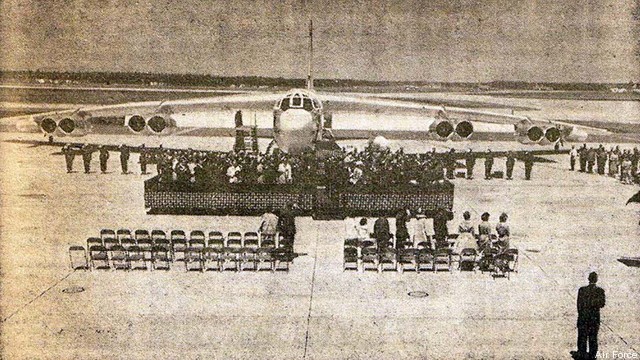 Michael Donley is the Secretary of the Air Force. This is the conclusion of a series of four op-eds Sec. Donley wrote exclusively for Breaking Defense on the future of the Air Force. Today’s piece makes the case that investments in new technology cannot be deferred — a modernization challenge that Army aviators are facing as well.

Among the most difficult challenges facing the Air Force is the need to modernize. In the sine waves of defense spending since World War II, most resources during defense buildups have supported wartime operations in Korea, Vietnam, and more recently Iraq and Afghanistan. The early-1980s build-up was the only one to focus on modernization without the burden of large combat operations, and to a significant degree we have been living off the investments from that era or even earlier.

The need for modernization is pervasive across the Air Force. While service life extension programs and periodic modifications have largely kept our inventory up to date, the cost of maintenance and sustainment is rising as budgets are flattening, and new threats and technologies require new investments.

The average age of our fighter aircraft is now 23 years, rescue helicopters 22 years, training aircraft 25 years, bombers 37 years, and tankers nearly 50 years. Satellites for missile warning, navigation, secure communications, and other needs are also aging, and replacements must be built and launched on a schedule consistent with the life expectancy of current constellations.

Given the proliferation of ballistic missile technology, integrated air and missile defense is a compelling operational need. Cyber defense and secure and resilient command and control networks are increasingly important. From nearly every aspect, the defense enterprise struggles to keep up with the demand for modern information technologies in its weapons and business systems.

The Air Force spends about 30 percent of its budget on research, development, procurement and construction — investments in future capability. Annual investment has been as high as 59 percent during the Reagan years, but is often the first casualty of shrinking defense budgets as leaders focus on operating and maintaining the current force. Within the $54 billion in reductions aligned to the Air Force over the next five years under the Budget Control Act, over 70 percent came from lower priority, delayed, or poorly performing investment programs.

The new Long-Range Strike bomber is one of our top priorities and encompasses approximately two percent of Air Force investment. An additional three percent over the next five years goes to sustain and modernize the B-52, B-1, and B-2 bombers to ensure these aging aircraft remain viable.

Space programs account for another 20 percent of investment, and our 10 largest programs include four space systems which the joint force and the American public depend upon for access to space, secure communications, missile warning, and navigation and timing. In this area, the pace of modernization is less a matter of choice and more dependent on the life expectancy of capabilities on orbit. Building and launching satellites is an expensive business, and we are looking for ways to reduce costs, increase competition and improve resiliency without introducing unacceptable risk.

Intelligence, surveillance, and reconnaissance; command and control; and cyber capabilities account for about 12 percent of total investment. Nuclear forces, special operations, and personnel recovery are another 10 percent.

Mobility modernization accounts for 13 percent of investment, and replacing the 50-year-old KC-135 aerial refueling tanker with the KC-46A is the most urgent priority. The KC-46 program of record is 179 aircraft, and calls for 18 aircraft by 2017, with final delivery in the late 2020s. The C-17 procurement is now complete at 223 aircraft, but we are continuing modifications to maximize its ability to carry cargo and fly farther. The C-5M program is modifying C-5B aircraft with new engines and avionics to make it more reliable and facilitate retirement of the C-5As.

A tanker story from our past can be used as a microcosm to describe the challenge of Air Force modernization and why this is so hard. Between 1958 and 1964, the Air Force built roughly 1,400 tankers — half the older KC-96s, half the new 707-based KC-135. This occurred when the United States spent on average eight percent of its annual GDP on defense, and the Air Force alone accounted for 40 percent of the defense budget. In the KC-46 program, we plan to buy a fraction of that number of aircraft and will take longer to do it. We could build them faster, but with the nation spending four percent of GDP on defense today, and with 20 percent of the defense budget, the Air Force cannot afford to go faster. When the KC-46 program is complete in 2027, we will have recapitalized less than half of the current tanker fleet.

The same pattern is repeating in other areas. The latest modernization of the C-130 fleet began in 1999, but at the current rate only 42 percent will have been replaced with the new J-model by 2019 — 20 years later.

Underpinning the Air Force’s ability to leverage and field these crucial technologies is America’s aerospace research and development infrastructure — a national asset that must be protected to ensure future US advantages in technology, as well as commercial aviation and space. Accordingly, we are protecting science and technology funding as a share of our total resources.

To continue funding these high priority investments, we’ve made the hard choices to terminate or restructure programs with unaffordable cost growth or technical challenges, eliminate expensive programs when more affordable alternatives exist, and discontinue or defer programs simply beyond our reach in the current fiscal environment.

America’s Air Force is the most capable in the world, but modernization can’t wait for the next up-tick in defense spending. We have important production lines under way and development programs now maturing that are, or will soon be, ready for production. Cancelling programs to wait for a future generation of technology would be wasteful and, in many cases, would risk the loss of critical engineering talent.

The new threats and investment needs, like cyber and missile defense, are not theoretical possibilities for the future. They are here, now. Modernization of the nation’s nuclear deterrent lies ahead. Other important programs, like a replacement for the Joint Surveillance Target Attack Radar System surveillance aircraft and a new trainer, are not yet funded.

The plans and resources available for modernization are not optimal, but we are making tough choices to keep them workable for the future. Further reductions in defense would make these choices even harder.

America’s Air Force must remain the most capable in the world; yet it is older than it should be and the need for modernization is growing while overall defense resources are diminishing. There are many advocates — in our own service, the Department of Defense and Congress, and among our industry partners — for much needed modernization programs; but we are already in the business of reducing some programs to fund higher priorities.

We need to stay focused on the right priorities and be careful about adding more programs than we can afford. Nonetheless, we must sustain forward momentum in modernization. The future success of the Air Force and the joint team will depend on it.

This is the last of four op-eds written by Sec. Donley exclusively for Breaking Defense. Click here to read the whole series.