PENTAGON: It’s explicit: China is the Air Force’s “pacing threat.” That was the clearest message from Air Force Secretary Heather Wilson, who met with the press the day after the Pentagon budget’s release.

China’s rapid modernization is driving the Air Force to respond, Wilson said, though she declined to detail any of the service’s efforts beyond noting the PRC’s anti-satellite test. 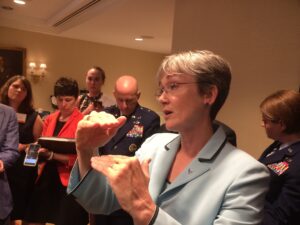 While Wilson didn’t say it, the B-21 bomber’s long range, stealth, electronic and cyber  warfare capabilities make it a key part of our response to China. So, I asked the secretary, does the fact the service has announced it will retire B-1s and B-2s as the B-21 comes online reflect that the service is confident in the new bomber program? She didn’t really reply other than to offer that the program is on schedule, an important fact in and of itself but…. After she recited the basics of the program — we’ll buy “at least” 100 B-21s of the 175-bomber fleet — she stopped. I asked if that meant she wouldn’t tell us anything about the B-21, and she graciously laughed and said, yes.

This won’t be so funny to Senate Armed Services chairman John McCain, who’s leveled his trademark ire on the Air Force for being so unforthcoming about the highly classified B-21 program.

Another colleague asked Sec. Wilson about the size of the bomber fleet and she did seem to hint that the service may buy more B-21s because they are “looking at” their force structure as a result of the findings of the National Defense Strategy.

Wilson added that the service will finally make decisions on the UH-1 helicopter replacement and the T-X trainer this year. The UH-1s will be replaced by a faster, longer-range helicopter able to carry more weight. The mission is two-fold: provide response to threats to nuclear weapons in the missile fields and escorts to weapons being moved and move senior government leaders to safety in the event of a serious threat. One can only wait….and probably wait some more, since Lockheed Martin’s Sikorsky just filed a “pre-award protest” with the Government Accountability Office about how the Air Force is assessing its offering.

We bet Gen. John Hyten  of Strategic Command will have something to say if that helicopter decision doesn’t happen soon.

The T-X has languished for years but seemed poised to finally be awarded this year. Then Congress did its usual fine job of not passing any regular spending bills, making it impossible for the Air Force to award the deal. Now we have a two-year budget deal, which should give the service relatively free rein to act, especially with tens of billions Congress added to the fiscal 2018 and 2019 budgets.