SecDef Keeps Door Open For Russia — If It Ends Aggression 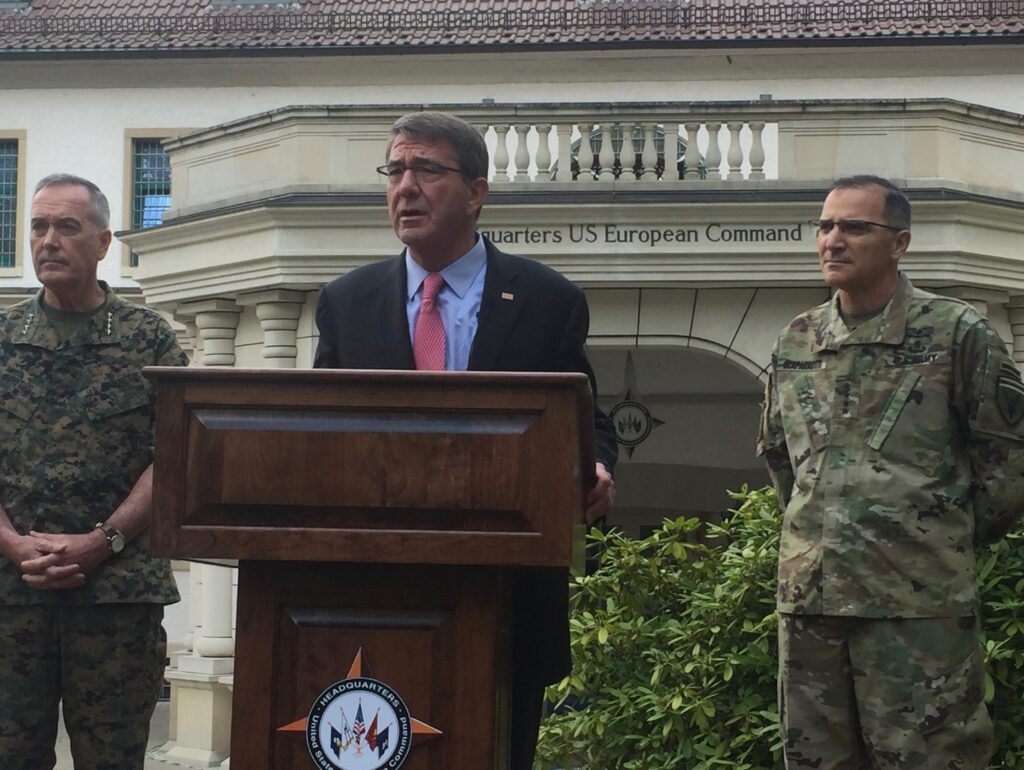 EUCOM HQ: As he addressed reporters today during the European Command change of command ceremony here, a visibly moved Defense Secretary told us he had just learned an American soldier died in Iraq.

Carter had few details but he said this: “But it shows you, it’s a serious fight that we have to wage in Iraq.  There are American service members involved and that’s all I know at this time.” That death is certain to help color his talks with allies here tomorrow about how to destroy Daesh, the self-proclaimed Islamic State.

In a statement issued soon after Carter’s initial comment, his spokesman Peter Cook issued a compelling statement saying that, “Our coalition will honor this sacrifice by dealing ISIL a lasting defeat.” Carter’s comments and appearance offered a rare glimpse at how the news of an American death weighs on him.

But the policy issues dealt with in his speech here are well worth noting. The Defense Secretary offered a complex narrative about a wayward and belligerent Russia, a country with which the United States must continue to deal with on a range of issues at the same time as we condemn much of what Vladimir Putin’s state does and take actions against it.

In a nutshell, Carter laid out the administration’s approach this way: “We are strengthening our capabilities, our posture, our plans, and our allies and partners, all without closing the door to working with Russia where our interests align. And we will continue to make it clear that Russia’s aggressive actions only serve to further its isolation and unite our alliance.”

It certainly isn’t a simple picture. “At sea, in the air, in space, and in cyberspace, Russian actors have engaged in challenging international norms,” Carter noted. As a physicist and expert on nuclear weapons, Carter pointed to what really worries him: “most disturbing, Moscow’s nuclear saber-rattling raises troubling questions about Russia’s leaders’ commitment to strategic stability, their respect for norms against the use of nuclear weapons, and whether they respect the profound caution that nuclear-age leaders showed with regard to brandishing nuclear weapons.”

While he clearly risked ridicule from Republicans who revile the Obama Administration’s so-called reset with Russia and point to it as proof the administration just doesn’t understand Putin’s regime, Carter argued that the US “will continue to hold out the possibility that Russia will assume the role of a constructive partner moving forward, not isolated and going backward in time as it appears to be today. Much of the progress we’ve made together since the end of the Cold War, we accomplished with Russia. Let me repeat that: Not in spite of Russia, not against Russia, not without Russia, but with it. Russia has worked toward the future before.”

In the meantime, Carter selected Army Gen. Curtis Scaparrotti, who last job was facing North Korea, “a place where ‘fight tonight’ is not just a slogan but an ever present possibility.” (Scaparrotti replaces Air Force Gen. Philip Breedlove). Scap, as he’s known, won praise from the secretary for knowing “how to prevent provocations from escalating.” In the end, that skill may be the most important one the new commander brings to the table as he copes with a belligerent, if economically failing, Russia and a host of allies who sometimes need encouraging to do the right thing when sabers get rattled.