SecDef & Marines Want To Disperse Across Pacific, But It’s Hard 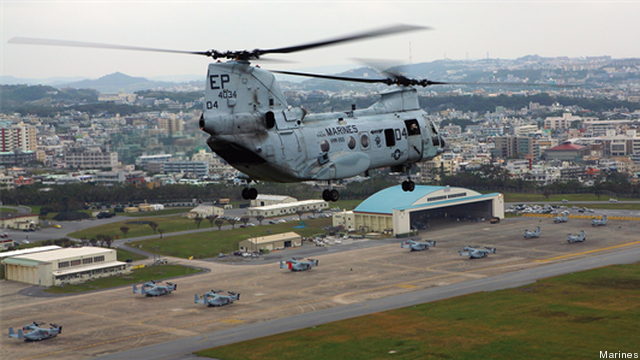 A Marine Corps CH-46 flies over Futenma in Okinawa.

WASHINGTON: As Defense Secretary Mark Esper calls for a more dynamic and widely dispersed US presence in the Pacific, work already underway on a new multi-billion dollar US air base on Okinawa — and the relocation of thousands of Marines to a string of bases stretching from Australia to Hawaii — is dragging along, complicating the Pentagon’s desire to shift focus to deter China across the region.

The new airfield project, which would move the existing Marine Corps Air Station at Futenma to a more remote location on Henoko bay on Okinawa’s east coast, has been hampered by decades of legal action by the Okinawa prefecture government along with fresh concerns over the soft, potentially unsteady soil that would lie underneath the two planned airstrips.

Work on pumping tons of landfill into the Henoko Bay to support the base began in December 2018, but the Japanese government is already looking at altering plans over worries that the soil may not support the construction. The soil and other environmental issues may push the cost of the project from an estimated five years and $3 billion to as much as 13 years and $20 billion, according to Okinawan officials.

The Japanese government is paying the construction costs for the move, as part of a 2006 deal between Washington and Tokyo, so US officials are loathe to weigh in on the price tag or timing. But the Japanese government is considering an expensive new three-year plan to drive 77,000 piles up to 200 feet below the sea surface to shore up the foundation of the landfill under the two runways. That work was not factored in to the original estimates.

The uncertainties over cost and schedule were underscored by responses to questions from Maj. Nishimori Tomoaki, a spokesman for Japan’s Ministry of Defense, who told me via email that due to “various uncertainties about the estimates,” Tokyo is “not ready to provide the [cost] estimates at this point.” The timeline for the completion of construction is a similar story. Tomoaki said that, “at this moment it is difficult to provide a definitive timeline for the relocation of MCAS Futenma, while we are committed to moving forward with the project step by step in order to accomplish the earliest possible return” of the land to the Okinawa government.

Long frustrated by the presence of 26,000 US troops on the small island, where US bases take up about 14 percent of the total landmass, the Okinawa prefecture launched another in a long series of lawsuits in August to halt work at Henoko. The suit came after Japan’s Supreme Court ruled in 2016 that the work could go forward.

The Marine Corps’ plans for Henoko are part of a larger shift of its forces in the Pacific region, which comes partially in response to China’s aggressive moves in the region, and its ability to range US and allied bases across thousands of miles of ocean.

Speaking earlier this week to students at the Naval War College in Rhode Island, Esper said that “allies and partners want us to lead…but to do that we must also be present” across the Indo-Pacific region. “Not everywhere, but we have to be in the key locations. This means looking at how we expand our basing locations, investing more time and resources into certain regions we haven’t been to in the past.”

Some of that movement is already cooked into plans the Marine laid years ago, but have so far been unable to achieve.

One major shift would see the movement of some 5,000 Marines from Okinawa to other bases, including 1,300 to Darwin, Australia, 2,700 to Hawaii and 4,100 to Guam. But as the work on the move to Henoko has been delayed — Futenma was originally supposed to be closed by February 2019 — other projects have also seen slippages, causing some military leaders to call for a reconsideration of long-held plans.

In May, then-Marine commandant Gen. Robert Neller told the Senate Armed Services Committee he thought the plan to leave Okinawa and move to Guam should be reconsidered. “The plan, as it is currently designed, I think is worthy, possibly, of a review,” Neller said. “That is my personal and professional opinion.”

One of the issues is that Guam lies 1,230 nautical miles southeast of Okinawa, which puts it further from missile batteries on mainland China, but also makes the Marines there more dependent on long-range transport to get them to hotspots in the South China Sea.

Neller said high speed vessels could be used to move small Marine units around the region, but those ships wouldn’t be enough to get larger forces to the fight, or provide a suitable deterrent effect. For that, Marines would need strategic lift, but “you’d have to resources it and pay for it or you’d have to have amphibs come from either Japan or the US mainland or you would have to contract for it,” Neller said.

A new study commissioned by the Navy found that it is “not clear” the Navy’s sealift fleet would be able to quickly move US forces overseas in a crisis, however. The Marine Corps has estimated the cost of the Guam relocation to be around $8.7 billion, with $3.1 provided in contributions by Japan.

Patrick Cronin of the Hudson Institute says the US “can do a better job of distributing the burden of security among allies and partners,” but distributing forces around the region is a smart move from the standpoint of creating more, and smaller, targets for any potential Chinese aggression. “We can maintain and expand access through low-footprint efforts designed to help address local problems, from humanitarian disasters to illegal fishing,” he says, which should go along with modernizing early-warning systems in the region.

A spokesman for US forces in Japan, Marine Capt. Tyler Hopkins, says in an email that the US and Japan are “committed to the construction” of the Futenma Replacement Facility at Henoko, “and we are pleased to see the positive steps the Government of Japan is taking toward this long-planned goal.”

Touring the region after taking over as commandant of the Marine Corps earlier this month, Gen. David Berger visited Henoko, though declined to give an estimate for when the work might be completed. “This is the most consequential region for us,” he said, “our alliance with Japan is an essential part of that.”

Berger also checked in on the construction of the Marine facility on the island of Guam. “I think the progress is solid,” he said, adding that the movement of the Marines should begin in the early 2020s. Plans call for the 5,000-Marine force to be in place by 2028.