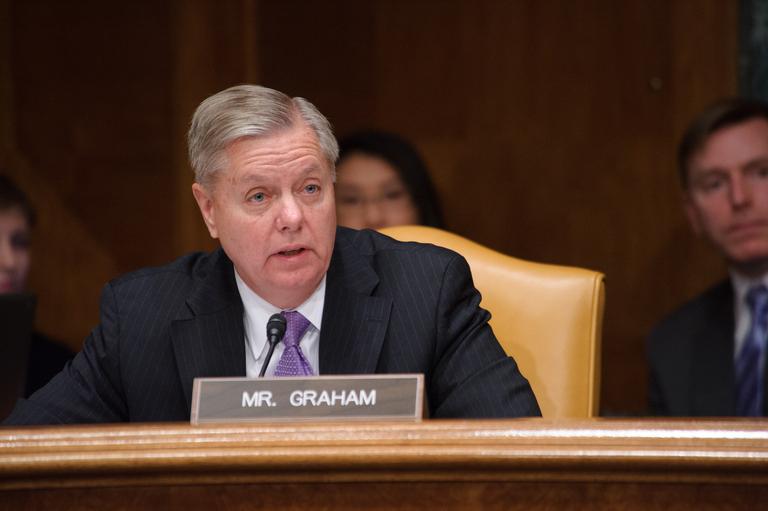 WASHINGTON: “When does that moment come when their program matures and goes across those redlines? At the pace we’re on, it’s just a matter of time. If something doesn’t change, it will be inevitable these redlines are met — if there’s another test of a warhead.”

Sen. Lindsey Graham appeared to document one of the redlines he said he knew the White House and Intelligence Community have set for a US strike against North Korea during an appearance at the conservative American Enterprise Institute..

Graham, regarded as one of the few senior GOP lawmakers who can both work with and criticize President Trump, appeared unhappy that South Korea has invited North Korea to the 2018 Winter Olympics. “How do you tell somebody in one breath, ‘hey little rocket man, you’re a bad man,’ and then invite him to the biggest party on the planet?”

There’s been considerable distance between the US and South Korea on a number of fundamental issues, though that distance seems to shrink considerably whenever North Korea rattles its sabers more loudly than usual. 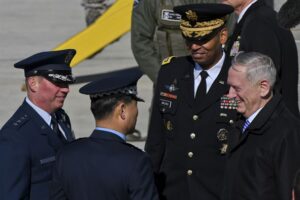 Meanwhile, Defense Secretary Jim Mattis in Canada said yesterday he briefed colleagues on the military options at the Foreign Ministers’ Meeting on Security and Stability of the Korean Peninsula while stressing that President Trump wants a solution in the “diplomatic realm.” But he made clear the administration’s approach is to clearly signal to North Korea that the US military and its allies are ready. “That is what we want to have come out of this, let the diplomats know that they are backed up by the force of arms,” he told reporters traveling with him.

He also said he thought the Olympics’ talk between the two Koreas are “a positive indicator,” but made clear it may not signal a fundamental shift: “We just don’t know where or how far it goes. Does it have traction?  Will it go a long ways or will it go no further than this? I don’t know.”

A defense expert at the conservative Center for the National Interest predicts that we’ll be right back to the deeply troubling status we were in before the Olympic talks were held.

“And Kim Jong-un’s real goal is simple: Using the Olympics to gain time to build a nuclear weapon to hit the United States. Period,” writes Harry Kazianis. “Mark my words–once the Olympics are over tensions will spike as Pyongyang goes back to testing missiles in April as they normally do, the same month U.S.-South Korean military exercises will begin after a delay to lessen tensions for the Olympic games. We will be staring down the abyss, again, in just a few months.”

For those who want to mark their calendars, the Olympics begin in PyeongChang Feb. 9 and end on Feb. 25.

Of course, as the senator noted this morning, it’s very difficult to get intelligence from an authoritarian regime such as North Korea’s. So knowing when any redline is crossed will be extremely challenging. We may only find out when the smoke starts to clear from a launch pad in the north. If that happens, the world will change in ways we can only guess at today.