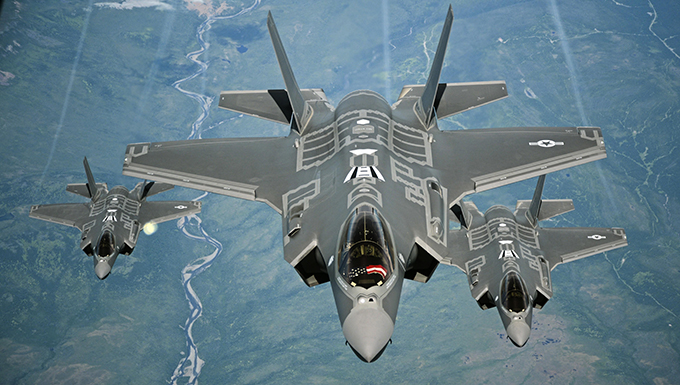 CAPITOL HILL The Senate Appropriations defense subcommittee added 12 more F-35 fighters to it’s version of the 2019 defense spending bill today, expanding the program while the Trump administration used some its its harshest rhetoric yet concerning Turkey’s role in the program.

The committee made remarkably quick work of a series of amendments, debating the entire $677 billion package for a total of 10 minutes before sending it to the full Appropriations Committee, which is slated to take it up on Thursday.

The bill would boost the number of F-35 jets the Pentagon plans to buy next year from 77 to 89, a smaller buy than the 93 aircraft being considered by the House in a bill that was being debated Tuesday.

The Senate panel also requested 13 ships for the Navy, adding one Littoral Combat Ship, a 2.6 percent pay raise for active duty troops, and $95 billion for research and development, which would be the largest R&D budget in Pentagon history.

The Senate bill is far from becoming the law of the land, however. It conflicts not only with the White House on the F-35 issue, but also with the Senate Armed Services Committee, which earlier this month actually cut the number of aircraft to 75 for 2019, noting that the members were concerned with the cost of maintaining the fighters. Of course, appropriators control how much money can be spent by the Pentagon, while authorizers control how the money can be spent. If appropriators buy more planes than the authorizers want then the authorizers can attach conditions but it’s very difficult to overrule the appropriators.

The HASC and SASC are slated to take their competing packages to conference next month, and leaders from both houses of Congress have expressed confidence that they can come together on a bill by the end of summer.

Earlier in the day, a top State Department official threatened to cut Turkey out of the program if it goes ahead with the purchase of a Russian air defense system.

The damage of the purchase would cause damage to Turkey’s relationship with the United States and NATO that is “difficult to repair,” assistant secretary of State Wess Mitchell told the Senate Foreign Relations Europe and regional cooperation subcommittee.

“I think we can’t be any clearer than saying that, both privately and publicly, that a decision on the S-400 will qualitatively change the U.S.-Turkish relationship in a way that will be very difficult to repair,” Mitchell said. “We’ve been clear on multiple occasions with the highest levels of the Turkish government that there will be consequences,” he said.

So far, the White House and Air Force have not explicitly said that the F-35 program is in jeopardy due to the S-400 deal. But last month, Air Force secretary Heather Wilson said the deal “does present some operational problems that we’re discussing with Turkey…particularly as it relates to the location of advanced aircraft in Turkey. We would not want to have that aircraft close to the S-400.”

Both the House and Senate authorizers are considering amendments to the NDAA that would curtail or stop the sale of F-35s to Turkey if the newly re-elected government of President Recep Tayyip Erdogan buys the S-400. Turkey is slated to buy about 100 planes; it took symbolic delivery last week of its first trainer aircraft — for use by Turkish pilots in the U.S.

American and NATO officials have said they’re concerned the presence of the Russian system on NATO soil would allow Russia to obtain a better understanding of how the F-35 and other NATO aircraft operate, pulling Western pilots in danger when flying near Russian airspace.

Next month, President Donald Trump and Defense Secretary James Mattis will head to Brussels for the annual NATO summit, where the debate over the Turkish sale will likely intensify.

One of the leaders of the movement to stop the F-35 sale, Sen. Chris Van Hollen, said last week that “Turkey’s acquisition of both systems would allow the Russians to more easily evaluate the capabilities of the F-35 and detect and exploit its vulnerabilities. That is unacceptable.”

Air Force Secretary Heather Wilson seemed to indicate two weeks ago that the US may not be unalterably opposed to the sale. It “does present some operational problems that we’re discussing with Turkey,” she said focusing on  “the location of advanced aircraft in Turkey.” The service’s bottom line: “We would not want to have that aircraft close to the S-400.” Whether those restrictions would allow for the F-35 to operate in Turkey is a question she didn’t address.