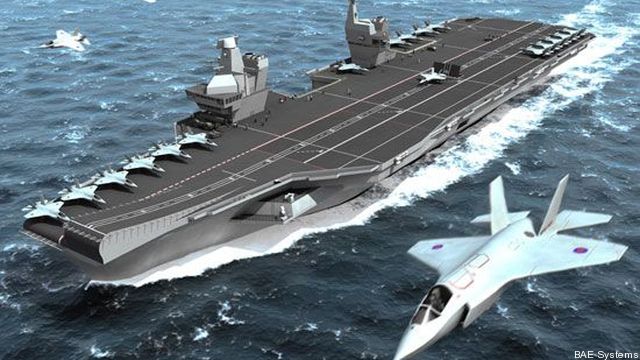 NATIONAL HARBOR, MD: Britain is the land of “the Lobby,” a setup that grants an official group of reporters access to senior government officials — including the Prime Minister — but does not allow them to attribute the information to anyone.

It is also the land that gave us the Chatham House Rule, that, when invoked means those attending an event “are free to use the information received, but neither the identity nor the affiliation of the speaker(s), nor that of any other participant, may be revealed.”

As a result of this deliberately oblique culture, there has been a raft of what we would call leaks that the British military is leaning heavily toward the F-35B, which can land vertically, to equip its Queen Elizabeth class aircraft carriers. This would be something of an embarrassing turnaround for Prime Minister David Cameron’s Conservative government. It decided during its big strategic review that they should refit the next generation ships to accept the carrier version of the Joint Strike Fighter, the F-35C.

Because of the sensitive nature of all these discussions — both to the British government and to the Pentagon — the public has heard very little directly about just what is going on. But the Navy League’s Sea-Air-Space conference generated a surprising amount of on-the-record discussion about which direction our ally appears to be headed.

The chief of Naval Operations, Adm. Jonathan Greenert said at the opening session that he has spoken to the First Sea Lord, head of Britain’s Royal Navy, “probably five times in the last two months.” Greenert offered the carefully neutral statement that “… we will provide the requisite training and proficiency — in the form of Hornet pilots… and whatever else he needs.”

On Tuesday afternoon, the Marine Corps’ program manager for fixed wing aviation , went a bit further during a panel discussion on Marine aviation at Sea-Air-Space.

“There is an interest in the UK to revert back to the B…,” Col. Kevin Killea said. “From my understanding, it has a lot to do with budget.. [and] the modifications they’d have to make to their aircraft carriers to go all F-35C. I don’t know if there’s going to be a mix” of the two aircraft.”

According to the leaks, the British have apparently discovered that refitting the carriers to handle tailhook jets like the F-35C will take an additional 1.8 billion British pounds, a hefty sum for a program said three months ago to cost 5.2 billion pounds. Also, the retrofit costs have soared 800,000,000 pounds from an original forecast of 1 billion.

On top of all this evidence, The Economist — as plugged into things British as one can be — reported a few hours ago that the decision to reverse the decision to buy the F-35C “seems almost certain.”

Sydney Freedberg contributed quite a bit to this story.