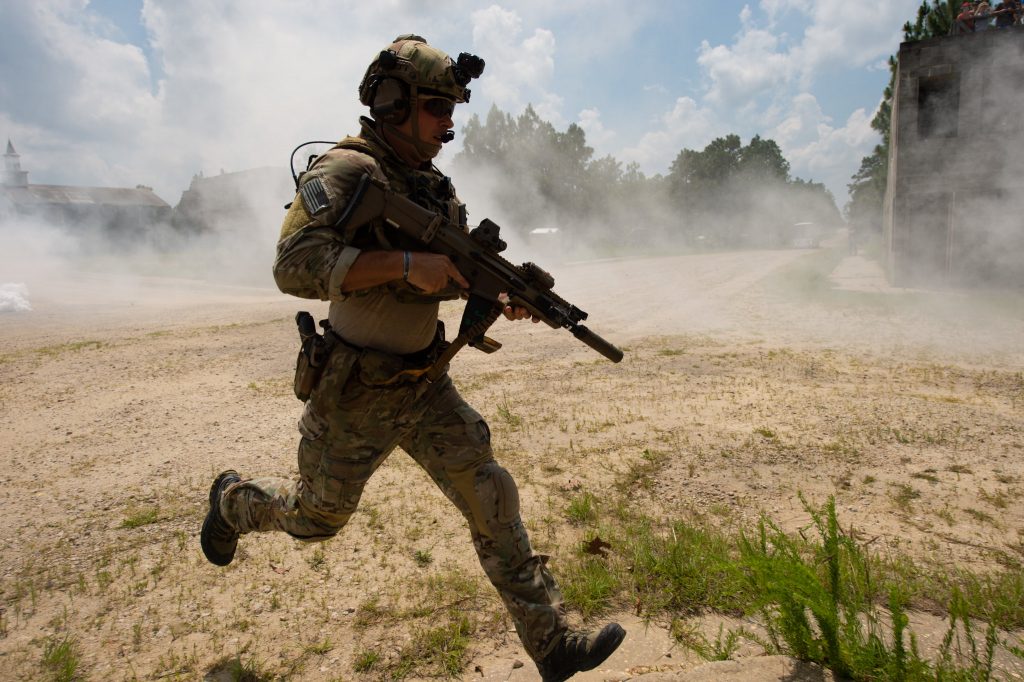 SOFIC: The Special Operations Command had to kill its $80 million Iron Man suit in order to save its most battle-ready pieces, command leaders said here this week, confirming that some parts of the futuristic suit have already been shipped to troops in the field.

The plan is to spend around $16 million in the coming months to continue testing and evaluating over a dozen promising technologies originally designed for the suit and incorporate them in to an ambitious new effort to modernize how special operations forces move, communicate, and fight.

The original idea behind what was known as the TALOS program was to encase operators in a rugged exoskeleton that would increase speed, endurance, and range of movement, all meant too increase survivability when attacking fortified insurgent positions. But the five-year effort was just too far ahead of what’s possible, several SOCOM officials said.

“It was a moonshot, but a moonshot that was worthy of taking,” SOCOM commander Gen. Richard Clarke told the annual SOFIC conference here this week.

The suit itself, portrayed in dramatic sketches and futuristic animation renderings over the past few years, might have outpaced the present, but SOCOM officials working on the project have found that if broken apart, the body armor, exoskeleton, internal battery pack, and vital systems monitoring technologies fit nicely into what the command is calling the “Hyper-Enabled Operator.”

Under the HEO umbrella, SOCOM leaders envision pushing cloud-based computing down to individual operators using secure communication links, using augmented reality projected on a heads-up display in the helmet, and small ankle and knee exoskeletons that can be quickly removed to lesson the load.

How is it different from TALOS? For starters, it’s not trying to do everything at once. Some operators might use the ankle exoskeleton, some might use the drop-down helmet display, while others make use of other specialized technologies, depending on the mission.

“It’s a quest to get the right information to the right person at the right time to create tactical advantage in the cognitive space,” Clarke said.

One of the biggest successes of TALOS so far has been the new, lighter body armor the team was able to have a hand in developing. The new kit covers about 44 percent of the wearers body, as opposed to the roughly 19 percent that the current chest and back plates protect. Critically, that extra cover comes in at no extra weight. 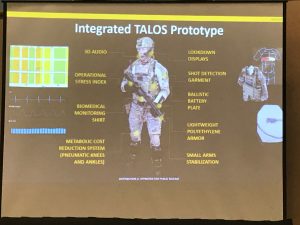 A concept of what the Hyper-Enabled Operator will look like.

“We feel like we had a tremendous success in that endeavor. It’s not a concept right now. It’s actually something that is being worn right now by our special mission units,” said Col. Alex MacCalman, director of SOCOM’s joint acquisition task force.

And that’s a big deal for troops facing RPG or grenade attacks which can send shrapnel flying over a much wider range than an aimed gunshot. “It turns out, fragments don’t shoot center mass,” said Col. Joel Babbitt, head of the SOF Warrior office. “Fragments are not going to shoot at that 19 percent” around the chest. “They’re going to splatter. If you’re covering 44 percent of your body instead of 19 percent, we just took away double the amount of fragmentation wounds that you would have taken, and we’re doing it for the same amount of weight.”

MacCalman is also coming close to spinning off a shirt that monitors heart rate and body temperature while also cooling overheated wearers. It’s so far along that the commander of the Army’s 5th Special Forces Group has offered to buy the shirts, and Navy SEALS have expressed an interest. Other technologies that are increasingly mature are 3D audio to help pinpoint the direction of sounds, and a battery pack that is integrated into the armor.

While TALOS was originally focused on protecting the door kickers hunting al Qaeda and Taliban cells, Clarke said that today in 2019, “we’re looking broader.” While special operations forces will still be the first point of contact in the ongoing fight against terrorist groups, the Pentagon’s move toward confronting potential threats from China and Russia has widened the scope. And that’s where the Hyper-Enabled Operator concept comes in.

“The operators could be the pilot who’s in the lead aircraft, so they can see to the edge,” Clark said. The idea is not to think of Tony Stark pounding through walls in his Iron Man get-up, but to consider what it looks like when being inside the suit, looking out. That’s relevant “not just the person on the ground, they could be underwater, or in the air.”