WASHINGTON: Special operations types — like those who found and killed Osama bin Laden –may stand tall and do amazing things sometimes, but they tend to be fairly plain spoken. You rarely hear them say something is “astounding,” especially a new weapon. For example, one special operator recently awarded the Silver Star said he would have preferred “a cup of coffee and a thank you” to his medal ceremony.

So when Adm. Michael McRaven, the leader of Special Operations Command (SOCOM) told about 500 people that the so-called Iron Man suit under development by his command is showing “astounding progress,” my ears pricked up.

The admiral said he decided to push the suit because it was time for Special
Operations troops to be able to go through a door, something they’ve done since their inception, with a better chance of living. We’ve reported on the suit before, when it was essentially an idea with a nicely-produced video to promote it. Things have progressed since then.

Three unpowered prototype suits are being assembled and should be delivered to SOCOM in June, McRaven said at the National Defense Industrial Association’s Special Operations/Low Intensity Conflict conference here. The first operating suit is due by August 2018. What will the “astounding progress” yield if all goes well? “That suit, if done correctly, will yield revolutionary increase in survivability and lethality,” McRaven said.

Let’s be clear. The suit will not allow its wearer to fly, the admiral said. At least not yet. But anything that improves the chances for a highly trained and very valuable Special Forces trooper to blast through a door and survive what awaits on the other side would provide a remarkable contribution to American military effectiveness.

The admiral wants this suit a great deal. Faced with the traditional reluctance of the defense industry to share data and to work with competitors, he’s brought in dozens of universities, the FFRDCS (Federally Funded Research and Development Centers to you and me), the vaunted national laboratories like Los Alamos, Sandia and Lawrence Livermore, the Pentagon’s DARPA and every company he can get to contribute.

I pressed SOCOM’s and DARPA’s spokesmen to get something concrete about progress on the suit. Not much luck. “The SOCOM team is currently leveraging years of DARPAand Natick Soldier Center investment in ballistic protection and exoskeletons to create initial prototypes schedule to be completed this summer,” Lt. Cmdr. Li Cohen said in an email. McRaven already mentioned that during his speech. DARPA referred me to SOCOM and the exoskeleton’s program website. The DARPA project aims to protect the soldier’s musculature and bone structure from the weights he carries and to augment his ability to carry that load. 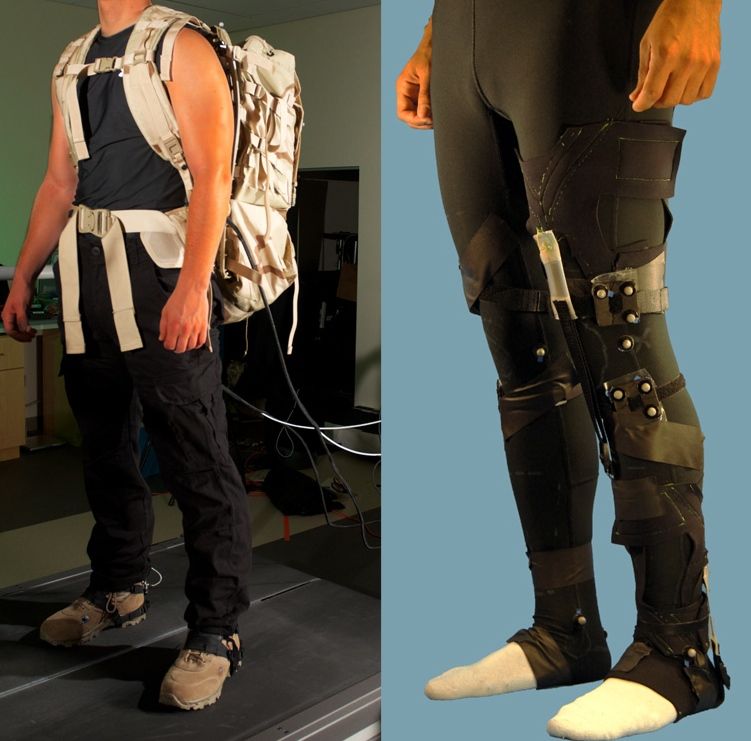 But I did get some information about what may become one of more important aspects of the program. McRaven told the NDIA audience he has spoken with Frank Kendall, the Pentagon’s top buyer, about getting permission to offer a large cash prize to a person or company who makes a major contribution to some of the suit’s challenges. One of the biggest challenges will be powering the suit and keeping its weight as low as possible. Batteries are dense. The average soldier carries between 87 and 127 pounds when he goes into combat. The Army Science Board has recommended soldiers carry no more than 50 pounds on a regular basis. Several studies have found that troops bodies are, to put it simply, wearing out under the load. So batteries are really important. And major progress in developing lightweight batteries that can take a charge, hold it and provide enough power to do something like power an Iron Man suit is extremely challenging.

Ballistic protection — stopping bullets and such from killing soldiers — is also very challenging. It needs to be as light as possible, flexible and still allow the soldier to run, move easily, do reconnaissance and shoot or fight. PEO Soldier — aka Natick — handles body armor.

So Adm. McRaven wants to offer prizes like the $40 million Google Lunar XPRIZE, designed to spur “the safe landing of a private craft on the surface of the Moon.” I checked with several Pentagon sources and confirmed that McRaven and Kendall has talked, but SOCOM has not filed any papers yet to get the ball rolling.

The combination of a prize with industrial, governmental and educational cooperation is, McRaven said, “the future of how to do business.” But it won’t be how most of the Pentagon does business, because SOCOM is exempted from many of the military’s usual procurement rules to help it buy or develop things it needs as quickly as possible. So McRaven may get what he wants. But the rest of the military will just have to gawk and beg for some if he gets Iron Man suits that really work.