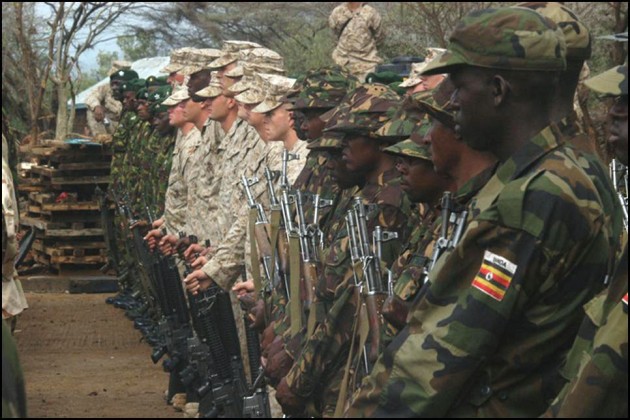 US, Ugandan, Tanzanian, and Kenyan troops stand at attention during a joint exercise.

WASHINGTON: Friday’s Navy SEAL raid aimed at capturing the Somali terrorist known as Ikrimah is a glimpse at the future of American warfare, one where a small US combat presence is boosted by widescale support to local forces who bear the brunt of the fighting.

The raid itself came like a blitzkrieg from the blue to outsiders. But for the American military and its African allies the headline-grabbing attack was just one part of a low-profile, years-long effort. It’s a war the Pentagon’s top counterterrorist, assistant secretary of Defense Michael Sheehan, has publicly called a model for operations across Africa.

It’s an approach informed by Afghanistan and Iraq, especially the latter years of each campaign where the US increasingly let locals take the lead. But Adm. William McRaven, head of Special Operations Command (SOCOM), and his boss Barack Obama want to avoid that painful first step where US ground troops bear the brunt of the fighting and the dying. Instead, the new strategy emphasizes a “small footprint” with no American boots on the ground in the combat zone from the beginning – except for a few special occasions, like Friday, when SOCOM comes in fast and hard.

In Somalia, America’s first line of defense against al-Shabab isn’t American troops. The frontline force, day in, day out, is the multinational African Union Mission in Somalia, AMISOM. Even when the US takes direct action with its own troops, AMISOM helps prepare the ground.

US Special Operations forces “have helped train AMISOM member country forces including Kenya and Uganda,” wrote McRaven’s favorite thinktank scholar, Linda Robinson, in an email to me this morning. “The former were reportedly helpful in the weekend events in Somalia.”

“There will likely always be some threats that pose such a direct and immediate threat to US interests that drones or unilateral raids will be employed,” Robinson told me, “but the administration and SOF [Special Operations Forces] focus is moving toward emphasizing the reliance on partners.”

Most media reports have connected Kenya to Friday’s strike only in the context of al-Shabab’s murderous attack on the Westgate Mall in Nairobi, for which the SEALs were said to be retaliating. But the jihadis hit the Kenyan capital in retaliation for Kenya’s US-supported war on them, most of it by Kenyan troops in Somalia. Kenya hosts the “International Peace Support Training Centre” where US military and contractor personnel train troops from multiple African nations in counterinsurgency, including lessons-learned from Afghanistan and Iraq. What’s more, it was Kenyan forces that kicked al-Shabab out of their main base, Kismayu, twelve months ago.

“The Kenya Defence Forces (KDF)….swept into Kismaayo in early October [2012] with three mechanized battalions, backed up by soldiers from the Somali National Army and a local militia called Ras Kamboni,” wrote James Verini in Foreign Policy after visiting the KDF base last year. (Ironically, Ras Kamboni started as a splinter group of al-Shabab). The Kenyans had first entered Somalia a year before – without informing AMISOM, which they only joined later – and poured 2,500 troops in for the Kismayu offensive. They were backed by heavy artillery, tanks, planes, and naval gunboats. After initial resistance, Al-Shabab retreated into the countryside to wage guerrilla war, pursued by AMISOM troops who are increasingly trained in US-style counterinsurgency.

Those African soldiers rely heavily on U.S. support. AMISOM soldiers don’t just get training from Americans, my friend and colleague James Kitfield wrote in National Journal after his own visit to Kenya in February. “According to State Department sources, once they leave the school, many AMISOM troops fly into Somalia aboard U.S.-funded aircraft, where they will be equipped with U.S.-supplied armored personnel carriers, body armor, and night-vision equipment,” he wrote. “Once in-country, they fight alongside Somali National Army troops that draw a salary from Uncle Sam. If wounded, African Union troops will very likely be evacuated aboard US-funded medevac flights.”

The U.S. also provides AMISOM intelligence, including imagery from Raven and possibly Predator drones, trained the African intelligence analysts, and even donated the secure computer network those analysts use, Kitfield found.

Kitfield’s editors entitled his piece “Outsourcing the Fight Against Terrorism” but that isn’t entirely fair. The US conducts a small number of drone strikes in Somalia, up to nine as of August 2012, according to the British paper The Guardian. The US has also proven itself willing to put its people in harm’s way on Somali soil when necessary, with two previous SEAL raids in 2009 and 2012. The 2009 attack, in fact, hit the same al-Shabab base town, Barawe, as was struck Friday. (The 2012 raid was to rescue Danish hostages).

It’s also not fair to call the SEAL raid a “failure,” a term seen increasingly on the Internet in the last 48 hours. It’s true that the SEALs did not capture their target and probably didn’t kill him. They reportedly performed well under fire, fending off Shabab forces without taking casualties or killing large numbers of civilians as happened in the 1993 “Black Hawk Down” fiasco (Somali police report seven dead.) The raid certainly put the fear of Uncle Sam into al-Shabab, which has reportedly reinforced Barawe with about 200 fighters it sorely needs elsewhere.

It’s also premature to say the near-simultaneous SOCOM raids in Somalia and Libya represent a decisive turn away from drone strikes to Special Forces on the ground. Both men and robots will remain in the toolkit, side by side, for years to come. Most western special forces would much rather capture or kill a target on the spot because it allows special forces troops to collect intelligence, so viewing this as a policy choice between a drone strike or troops on the ground is a false dichotomy.

Likewise, it’s too easy to describe “direct action” – drone strikes and commando raids – and the “indirect approach” – training and supporting local partners – as polar opposites. In fact they’re less black and white alternatives than they are yin and yang, each turning into the other in an endless cycle. Policymakers might prefer to restrict Americans to training roles and let local allies do the fighting alone when they can, rely on drone strikes when they can’t, and put US troops in combat only as a last resort. But all these activities – direct action and indirect, kinetic and non-kinetic, hard power and soft – are complementary. That’s a truth that even the slow-to-change US Army has begun to realize, not just SOCOM.

Local forces in large numbers, like the Kenyans or the Afghan security forces, aren’t just inferior substitutes for US soldiers on the ground: In terms of local knowledge and intelligence-gathering, they often know things and can go places that Americans can’t. Commando raids aren’t just a way to hit targets the local partners can’t get to. They can disrupt enemy forces in ways that it takes massed manpower on the ground – the locals – to take advantage of. Here’s hoping that is exactly what happens to al-Shabab, regardless of whether the SEALs killed their man or not.