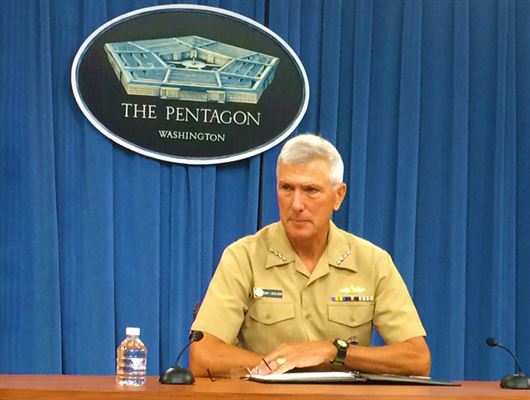 PENTAGON: Even as the latest Mideast war sucks in more US attention and resources — as well as wannabe jihadis from around the world — the outgoing chief of Pacific Command emphasized the much-derided “rebalance to the Asia-Pacific” is still going strong. Despite sequestration budget cuts the US is still strong enough to handle both theaters at once — and it must continue to be, Adm. Samuel Locklear told reporters here today.

“Our ability to remain forward and to do the things that we need to do in the Pacific will not be affected in any significant way,” Locklear said, “[though] it could be around the edges,” for example by the diversion of a particular reconnaissance aircraft or skilled individual.

“Even with a threat like ISIL, we cannot walk away from our responsibilities in the Asia-Pacific and, as the president just mentioned in his speech at the UN, we won’t,” he said. “The US joint force, even in a time of sequestration which we’ve been struggling through, is still a global force and it’s still capable of pursing US interests and the rebalance.”

Pacific Command is contributing to the global campaign against the self-proclaimed Islamic State, Locklear said, by consulting with regional partners rather than redeploying US forces. Those Pacific partners report, “there’s probably been about a thousand potential, aspiring fighters that have moved from this region” to Syria and Iraq, he said. “That number could get larger.”

“I believe most of them have been recruited via social media,” Locklear added. “Social media appears to be the place where ISIL [aka ISIS] and al-Qaeda have been particularly effective at reaching out and finding these particular people.” Yes, the Asia-Pacific is a long way from the Mideast — though India, with its massive Muslim population, is closer — but social media flows worldwide at Internet speed and global travel keeps getting easier, the admiral said.

At least for now, however, US forces are not flowing from PACOM to the Mideast or, for that matter, Africa, where 3,000 Army troops are deploying to help contain Ebola.

The US has not dialed down the military aspect of the pivot because of crises in the Mideast or budget problems at home, Locklear said. “What is it we said we’re going to do that we haven’t done?” he asked rhetorically. “I don’t think I can find anything.”

As for the Pacific theater itself, Locklear said tensions are back to normal after the recent reckless intercept of a US P-8 aircraft by a Chinese fighter off of Hainan. “We haven’t had any more” such incidents, he said. Given all the American efforts to engage the Chinese military, one reporter asked, is Locklear disappointed such incidents still occur? “Well, I am disappointed,” he said. “I’m not necessarily surprised.”

What’s more, the effort spent building the military-to-military relationship remains useful. “I hope we don’t, but if we do (have another incident), we will have a mechanism to address it,” Locklear said, “and we’ll be forthright about it.”

In any case, such unpleasant incidents are “outliers” to the vast majority of interactions that are handled “safely and professional,” the admiral said. “We do have a lot of interactions and most of them are good. In fact some of them are in multilateral forums where we’re exercising together,” as in the recent Rim of the Pacific (RIMPAC) exercise.

Where there are disagreements, sometimes the two militaries just tacitly agree to let things lie. Since November, when China announced an Air Defense Identification Zone over waters it disputes with South Korea and Japan, “we haven’t had any direct dialogue with the Chinese about the establishment of that ADIZ,” Locklear said. “We don’t recognize it, militarily we don’t conform to it, [and] it just doesn’t enter into the dialogue of discussions with the PLA.”

In fact, today Locklear sounded more worried about the Russians than the Chinese. “In the last couple of years,” he said — predating the intervention in the Ukraine — there’s been a significant increase in Russian probes at US airspace. “It’s concerning, because now you have basically Cold War-kind of activities with long-range bombers that are flying in the direction of the US ADIZ from Russian soil,” Locklear said. Nevertheless, “they don’t have a robust force in Pacific, neither a maritime or an air force, at this stage.”

Meanwhile the US continues to move forward — albeit in baby steps — with old allies and new partners. In the Philippines, which has long been ambivalent about its old colonial masters, there are discussions about potential operating locations for US forces. “Let me reiterate again that the US has no desire or plans to build any US bases anywhere else in the world,” Locklear said. “The plan with our Filipino allies was where we might be able to put a shared facility.”

So far, the two sides are working well together. “They have made the initial movements [and] we like what we see, [but] it’s broad and general at this point in time,” Locklear said. “There’s no been real dialogue yet about [specific] places that we would do this.”

Then there’s Vietnam, a country that fought the US for a decade but has fought the Chinese twice since then (and countless times in its history before). Should the US lift its longstanding arms embargo on Hanoi? While Locklear deferred to the ongoing political decision-making, he did say his military advice was that it was time to “consider” changes.

“We are in the nascent, early stages of talking about what type of military assistance we provide to Vietnam,” he cautioned. “You have to have the discussion about whether you can provide them lethal aid or not. That dialogue’s still going on and that decision has really yet to be made.”

Locklear did single out one area of cooperation, however, both with Vietnam and Asian-Pacific countries in general: “awareness” of both the airspace and waters around their countries. “We’re particularly interested in helping them understand, where we can, what’s happening in their backyard,” he said.

While Locklear didn’t get into specifics, that need for “maritime domain awareness” is driving Australia and India to purchase Boeing P-8 Poseidon reconnaissance planes. It could create a major market for surveillance drones like Northrop Grumman’s new MQ-4C Triton.

Though the drone is still in development, “we have a team, as I stand here today… down in Australia,” Triton program manager Capt. Jim Hoke told reporters Tuesday. “The Australians are very interested in building that into a full-up FMS [foreign military sales] case at some point.” There’s also interest from Japan, he said, as well as European allies like Germany and the UK.

Unarmed drones, communications networks, and other “awareness” equipment may be one way the US can profitably assist its Asian allies without escalating the regional arms race through the sale of lethal weapons. If Pacific countries can monitor their maritime borders and airspace better, in fact, they might keep China from imagining it can get away with some very dangerous things.