Space ‘Force’ Vs. ‘Corps’: One’s Not Actually A Service

WASHINGTON: Will the Space Force or Space Corps — whatever Congress decides to call it — legally count as a new armed service? Or will it be just a new name without legal weight, something the next administration (or the current mercurial president) could reinterpret at will? It may sound like hair-splitting, but that’s a major point of contention between the Democrat-controlled House and Republican-led Senate on the Trump Administration’s Space Force proposal, one that will have to be fought out in the upcoming conference on the National Defense Authorization Act.

“The Senate proposal never actually establishes a separate service,” says Kaitlyn Johnson, associate director of the Aerospace Security Project at the Center for Strategic and International Security (CSIS). “That’s a big gaping hole in the legislation.”

By contrast, the House language does formally set up a new service, even though it changes the name from “Space Force” to “Space Corps.”

While Johnson is confident that some sort of new organization will emerge from the defense bill conference, she worries that if the Senate language stands it will leave open the possibility that a new administration could walk away from the Space Force because there is no legislative requirement for it to be created. “The SASC bill could be walked back … [to] just a renaming of Air Force Space Command to ‘US Space Force.'” 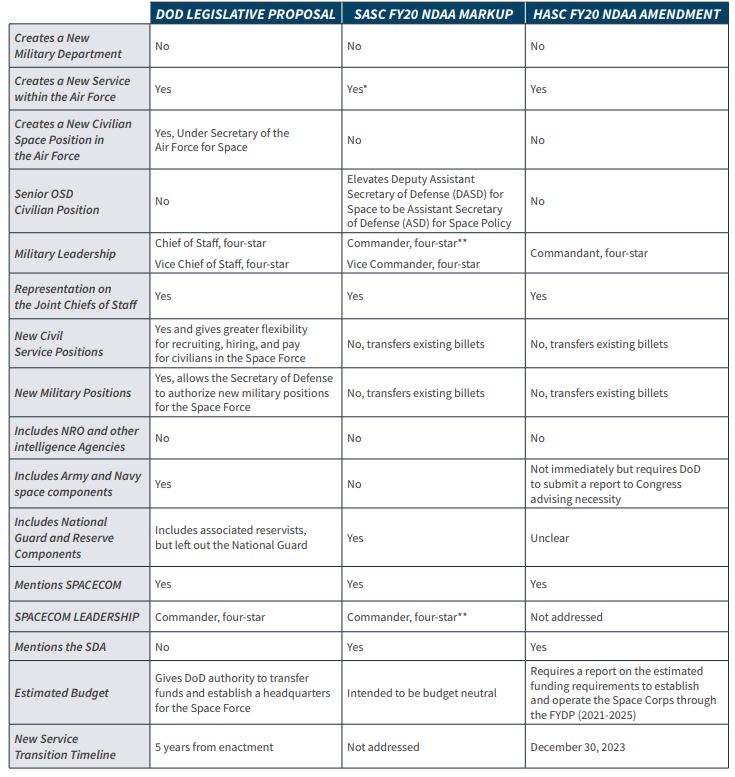 Johnson has put together an extremely handy primer, complete with a chart (reprinted above), that compares the Pentagon’s February proposal, the Senate Armed Services Committee (SASC) language passed last Thursday by the Senate, and the House Armed Services Committee (HASC) language passed June 13 but not yet taken up by the full House. (That will happen later this month.) Neither side of Capitol Hill has moved all the way to establishing a new Department of Space, as originally envisioned by President Donald Trump.

Instead they take different approaches to creating a new organization for space within the Department of the Air Force, analogous to how the Marine Corps exists within the Navy Department. Both, for example, would create a four-star billet to head the service who would, at least eventually, sit on the Joint Chiefs of Staff. But the House calls him the Space Corps commandant, continuing the Marine Corps analogy. Meanwhile the Senate calls him the Space Force commander, a title normally reserved for the heads of operational organizations like the current Air Force Space Command, not services, whose role is to “train, organize, and equip” forces for those operational commanders.

The original Trump proposal, incidentally, called for a four-star Space Force chief of staff, analogous to the uniformed leaders of the Air Force and Army. (The Navy, with its passionate adherence to its own traditions, is led by a Chief of Naval Operations, even though the CNO has not had operational responsibilities for decades).

Johnson notes that the Senate further would restrict Space Force personnel to those moved from the Air Force. It includes no provision for eventually integrating Army and Navy personnel, as foreseen by the HASC and by the Pentagon’s original proposal. While the HASC initially would move only Air Force personnel to its Space Corps, it asks DoD after a year to undertake a study of how to eventually incorporate personnel and programs from the other services.

One of the biggest concerns Johnson sees with both pieces of legislation is the demand for numerous reports back to Congress, which will eat up vast quantities of staff time. “I worry that both have a lot of reporting requirements — essentially, push back on DoD’s proposal that was described to me as a ‘blank check.’ But if you are going to stand up so many reporting requirements, the staff can’t focus on doing their jobs thinking about new doctrine, policy, development of career paths, and how to fit in with Air Force operations.”

This is especially so if the Space Force isn’t allowed to hire more staff besides those already working for Air Force Space Command, as ordered in the Senate bill, she noted.

A number of space experts (both inside and outside of DoD) have expressed similar concerns that the Senate’s language on the creation of US Space Command also risks overburdening space leadership and their staffs. The Senate last Thursday confirmed Gen. John Raymond, current head of Air Force Space Command, as the Space Command chief. The Senate NDAA would also give him the job as head of the Space Force for a year before the two jobs (leading Space Command and Space Force) would be split.