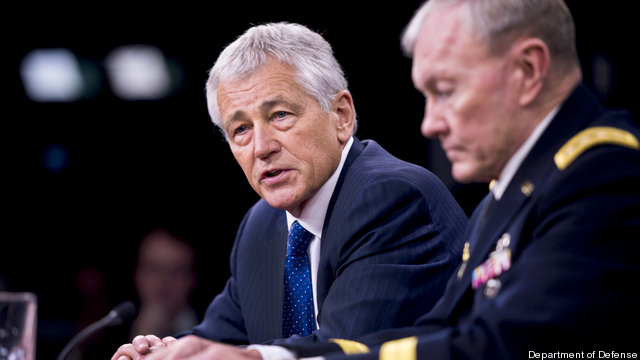 PENTAGON: The services’ draft budgets delivered to the Office of Secretary of Defense early this month are probably being shredded in light of the campaign in Iraq and Syria against the terrorist group known as ISIL.

“If you’re asking me, are we going to have budget problems, the answer is yes,” the president’s top military advisor told reporters this afternoon. Gen. Martin Dempsey said the 2015 Pentagon budget assumed that US military commitments would “level off or come down” and that Congress would allow the military to change pay, close bases, retire weapons and make other changes.

That hasn’t happened. “Commitments have gone up and the things that we were looking for in terms of flexibility have only very minimally been delivered.”

Those budget problems will doubtless become more expensive when the ground forces needed to destroy ISIL are built and then deployed over the next year or so. Dempsey made clear today there will be ground forces but they will probably be the famous “moderate Syrian opposition,” Iraqis and Kurds.

“The president gave me a mission: destroy ISIL. I will recommend to him what is required to destroy ISIL,” said a suitably resolute chairman.

One interesting tidbit came from Dempsey when he said we wouldn’t need people on the ground to help direct aircraft to their targets unless we are supporting forces on the ground that are closing with each other. That would seem to mean we will need people trained as forward ground controllers once the “moderate Syrian opposition” is trained in Saudi Arabia, marches home and closes with ISIL forces. So it sounds as if we will train the opposition in that skill.

There wasn’t much other news out of this press conference except that we’re not yet sure if we killed any ISIL or Khorasan group leaders in the air strikes so far, Hagel said.