WASHINGTON: To no one’s surprise, the Boeing-Lockheed team has filed a formal protest against the award to Northrop Grumman of the $80 billion Long Range Strike Bomber contract.

Industry sources had been talking of strategies to prosecute or defend against a protest for at least six months, though, of course, no one offered much in the way of details.

Many protests are pro forma long shots, since there’s little incentive not to protest a program you’ve already lost. The average success rate is two percent, analyst Byron Callan wrote, giving the Boeing-Lockheed protest much better but still long odds of 15 percent. But, well-connected consultant Loren Thompson told us, this protest has a real chance of winning and overturning the award. That would be a massive embarrassment for the Air Force and the Pentagon, raising fundamental questions about their ability to make sound purchasing decisions.

UPDATE: The Air Force says in a statement by Maj. Robert Leese that it is “confident that the source selection team followed a deliberate, disciplined and impartial process to determine the best value for the warfighter and taxpayer.” Leese says the service “will fully support the GAO’s independent process.”

As a reminder to those who have not suffered through major protests in the past, all work on a program is suspended pending the protest review. The protest process can take 100 days from the day of filing before a decision is issued. The Air Force has 30 days to file its defense of the award with GAO. The Boeing-Lockheed team has 40 days to prepare their report and submit it to GAO. Do not be surprised if members of Congress weigh in on the protest before a decision is announced. Sydney asked Air Force officials at the award announcement how disruptive a protest would be, but they declined to answer.

Now, what are the arguments for and against the protest? UPDATE ENDS

“Boeing’s bottom line here is, there’s no way Northrop Grumman can possibly execute this program to the cost and schedule it’s signed up for,” said Loren Thompson, a member of the Breaking Defense board of contributors. But Boeing can? Given Boeing’s experience in mass production and investments in advanced manufacturing, Thompson said, “they’re more likely to.”

However, we all know just how well Boeing has done so far on the tanker contract, which only involves a rebuilt civilian aircraft, not an advanced stealthy aircraft with what Air Force acquisition chief Bill LaPlante described as “eye-watering” advanced technologies.

An op-ed we ran last week by Robert Haffa — a consultant who used to work for Northrop and retains close business ties to the company — offers what may be a preview of Northrop’s defense. Haffa notes that Northrop Grumman “has advanced the state of the art in all- aspect stealth aircraft from modernizing the B-2, developing the stealthy X-47B unmanned aircraft (a candidate to help solve the U.S. Navy’s long-range strike dilemma),and working other programs.”

UPDATE: Richard Aboulafia, a respected aerospace analyst at the Teal Group, was less optimistic than Thompson about the chances of the Boeing-Lockheed leviathan team. “The protesters face an uphill battle. The Air Force went out of its way to protest proof this contract and used multiple layers of oversight,” he says in an email. “On the other hand, the very fact that the companies are protesting despite the cost indicates that they feel they’ve got some kind of chance here. It’s unlikely that they’ll have found something as significant as a tanker protest, but it is conceivable.” 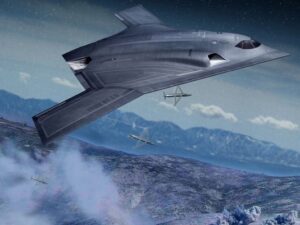 “Northrop Grumman Corporation is disappointed that its former LRS-B competitors have decided to disrupt a program that is so vital to national security.

“The U.S. Air Force conducted an exceptionally thorough and disciplined process with multiple layers of review. Their process took into full account the parties’ respective offerings and their relative capabilities to execute their offerings on schedule and on budget.

“Northrop Grumman offered an approach that is inherently more affordable and based on demonstrated performance and capabilities. Our record stands in contrast to that of other manufacturers’ large aircraft programs of the last decade.” UPDATE ENDS

Between them, Boeing and Lockheed delivered more than 300 military aircraft last year, Thompson noted. Northrop Grumman delivered nine, all either drones or turboprops rather than jets. True, Northrop built the nation’s only stealth bomber, the B-2, but since those glorious and expensive days, it’s evolved into a maker of drones and of advanced sensors and other components for other companies’ planes. “Northrop is basically out of the manned aircraft business,” Thompson said. “Acting as if these two offerors are equal… is kind of crazy.”

Past performance is also a problem for Northrop, Thompson said, although given the very different kind of business it does, it’s not easy to make an apples to apples comparison. “Lockheed and Boeing programs have tended to come in about 50 percent over the originally bid price over the last 20 years,” he said.  “The analogous number for Northrop Grumman is more than twice that.” Northrop has particularly struggled with big satellite programs such as NPOESS, which incurred huge cost overruns.

Note that Thompson has at least half of a dog in this fight. While all three companies contributed to this thinktank in the past, only Boeing and Lockheed still do. He’s also a consultant to Lockheed. Partly because he’s such an insider Thompson is extremely well-informed. “I knew this was coming two days ago,” he told me, and he’s written pieces for Forbes that previewed the protest, one a week ago, one just before the protest announcement (which has since been updated).

“This looks like a replay of the [KC-46] tanker competition where Northrop bid aggressively and Boeing argued the government was not thinking rigorously [about cost and risk],” said Thompson. “It failed to adequately assess risk of the competing proposal… how unlikely a successful execution by Northrop would be.”

While the Air Force was overly optimistic about Northrop’s capability to produce the plane, Thompson said, it was also overly pessimistic about the Boeing-Lockheed team’s ability to control costs. To quote the companies’ press release this morning, “the cost evaluation performed by the government did not properly reward the contractors’ proposals to break the upward-spiraling historical cost curves of defense acquisitions.”

In English, that means the companies based their bid on new techniques to keep costs down, but the Pentagon scored the bids based on historical cost data — which of course is worse. In fact, the Air Force ended up doubling both competitors’ estimates for the development phase. Given the legacy of overruns on major weapons programs, it’s hard to argue with a conservative cost estimate, but Boeing and Lockheed are going to try.

“If the award is overturned by GAO it means a delay up front in executing the bomber program,” Thompson said. The reason Boeing is going forward with the protest is because it’s convinced that the delays would be far worse when Northrop ran into execution problems.”

Here’s the statement from Boeing and Lockheed:

“Boeing and Lockheed Martin concluded the selection process for the Long Range Strike Bomber was fundamentally flawed. The cost evaluation performed by the government did not properly reward the contractors’ proposals to break the upward-spiraling historical cost curves of defense acquisitions, or properly evaluate the relative or comparative risk of the competitors’ ability to perform, as required by the solicitation. That flawed evaluation led to the selection of Northrop Grumman over the industry-leading team of Boeing and Lockheed Martin, whose proposal offers the government and the warfighter the best possible LRS-B at a cost that uniquely defies the prohibitively expensive trends of the nation’s past defense acquisitions.”