The Air Force Needs More Dough; Make Up $30B That Goes To Intel Agencies 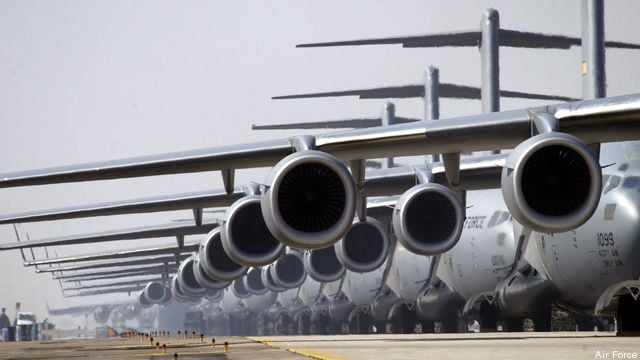 The Air Force provides the essential capabilities that make America’s joint operations possible and has been involved in nearly every military operation overseas since 1991. As the Pentagon delves into the details of the 2014 budget, getting the Air Force budget right is critical to ensure that the nation can count on its indispensable role in a time of shrinking resources.

Our adherence to the idea of a joint force has led to a roughly equal cut of spending among the services. This is not the optimum allocation of scarce resources in coming years if our national strategy is to maintain global presence and communications, as well as to fight cost-effectively and be capable of defeating modernized militaries.

Start with the raw budget numbers. For 2013, the Air Force requested $140 billion, roughly comparable to the Army’s proposed $134.5 billion and the Navy’s $133.7 billion. These budget dollars are to cover regular operations and maintenance, military construction, procurement, and the like. Unlike the other services, the Air Force gets less than its baseline request. To begin with, approximately $30 billion of the Air Force budget is “passed through” to intelligence agencies such as the National Reconnaissance Office (NRO) or the National Geospatial Intelligence Agency (NGA). Subtracting those funds leaves the Air Force with about $110 billion in 2013 for its operations, or $24.5 billion less than the Army and $23.7 billion less than the Navy at a time when President Obama’s Defense Strategic Guidance calls for increased airpower requirements.

During combat, Air Force operations such as the thousands of close air support missions that protect and rescue troops engaged in combat are paid for with money known that comes from the OCO (Overseas Contingency Operations) accounts. Connected with this is the vital air refueling mission that the other services depend on. Moreover, the Air Force’s mobility missions, which are a large percentage of the 350,000 sorties flown in support of Operation Enduring Freedom since 2001, also are paid for by war monies.

Rapid global mobility is really the glue that allows the U.S. military to operate on a daily basis, providing continuous airlift of troops, medevac of wounded service members, and supply of food, munitions, and basic supplies around the world. The mobility mission also operates Air Force One and does much of the moving of U.S. government leaders around the country and the globe.

To take another mission area, one-half of the Air Force’s space budget, roughly $10 billion in 2012, was spent on maintaining the GPS capabilities used by the U.S. government, all military services, and, well, Americans everywhere. The space mission includes the new Advanced Extremely High Frequency satellite system, the backbone for secure government communications, and the Wideband Global Satcom communications system. Maintaining robust, survivable terrestrial communications systems for national leadership and military combatant commanders on the battlefield also falls largely under Air Force purview, as does a good part of the military’s cyber operations.

Finally, the collection and distribution of ISR data, including real-time video, is done largely through Air Force-funded satellites and Remotely Piloted Aircraft. The sharing of data from those assets with military commanders and political leaders is made possible by the Distributed Common Ground System.

Yet, after the cost of these vital missions are subtracted from the budget, the Air Force is left with only roughly $45 billion for responsibilities the public most associates with the Air Force, such as air superiority, precision attack and nuclear deterrence, and air support to joint forces. Of course, that also includes discretionary funding for personnel costs, base construction, which type of airplane to modernize or truck to buy, and the like. The other services are able to devote a far greater share of their budgets to core missions and discretionary spending. Once you do the math, the Air Force is forced to operate on almost $100 billion less. Obviously, the Air Force benefits as much as any armed service from global functions like communications, but appropriating money for public missions reduces funds for its own indispensable responsibilities, as well as upkeep and modernization.

Since 2007, the Air Force has cut 700 planes from its fleet and plans to slash its number of airmen by 9,900 over the next decade. These cuts also affect its sister services. For example, starting in the 2013 budget, the Air Force chose to eliminate the C-27J medium-lift cargo plane, which the Army wanted to keep. Similarly, the service wanted to cut its Block 30 Global Hawks, despite increasing demand for ISR from combatant commands.

Ironically, given Washington’s budget dysfunction, the Air Force wound up having all its proposed cuts in 2013 rejected by Congress this summer and money restored to fund the force for next year only. Yet, as this year’s budget drama showed, the question remains whether the Air Force budget is robust enough so it can maintain itself at the highest readiness levels, carry out the missions the nation expects, and to prepare for future challenges from states like Iran or China.

Reallocating resources to ensure the Air Force has at least parity with the Army and Navy by replacing the $30 billion in pass-through monies to intelligence agencies would be a first step. Over the next five years, in fact, the Navy and Army each purchase more planes than the Air Force. The force must have sufficient funds to recapitalize far more rapidly than its current 10-year plan allows. Equalizing budgets could remedy some of the following challenges the Air Force faces: a fighter pilot shortage of at least 100 pilots per year; slow the retirement of A-10s; ensure full modernization of the F-22 Raptor and C-130 series; return to earlier production plans for the F-35 to ensure unit costs do not rise; and restore the service’s $900 million cut in military construction and family housing, among other options.

It may be impossible simply to pin the “right” number on the Air Force budget, and there is certainly money to be saved in operations, purchasing practices, and personnel costs, not to mention closing unneeded bases. However, it also seems clear the service should not have to fly 30-year old fighter jets or 50-year old bombers while cutting thousands of airmen and forgoing other modernization plans in the face of increasingly lethal threats. The nation’s future defense capability depends on unsurpassed global presence and power projection. To remain a global power, the United States must remain an aerospace power.

Michael Auslin, an expert on Asian security and politics, is a scholar at the American Enterprise Institute think tank in Washington.