The Coming Of The America Class: A Driver of Innovation 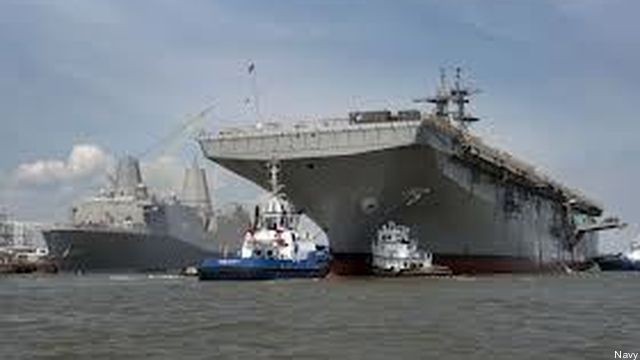 A christening of a ship of the line is rare. When it happens, thoughts of how that ship might be used, where it might operate and how it might make new naval history are part of the excitement.

This was clearly evident at the Oct. 20 christening of the USS America, the fourth ship of that name, in Pascagoula, Miss. This ship is not only the lead ship in a new class but will integrate the newest aircraft of the Marine-Navy team aboard a single operational platform at sea. F-35 Bravos, Ospreys and CH-53Ks will fly from her in the years to come. The first ship will operate out of San Diego, sure to be part of the Pacific Century.

The America also is a representative of the contribution of the Gulf Coast to American military capability. The Ingalls shipyard where she was built is the heart of Navy shipbuilding, now and has been for many years. Not far away, F-35Bs are being prepared for action in Eglin AFB. In a happy confluence of events, two new F-35Bs landed at Eglin – one British and one US Marines – the day before the christening.

Although called an LHA, it is not. Rather than being a Landing Helicopter Assault ship, it really is a flagship for 21st century operations. These operations will be shaped by the need to operate at greater distance, and to strike with aircraft bearing significantly greater capability than the ones they are replacing. The Osprey and the F-35 Bravo can operate at greater distance, speed and lethality than what they are replacing. The F-35B will provide — with its sister assets — a change as big as that for which Admirals Sims and Halsey planned for with the introduction of the original aircraft carriers before World War II.

Indeed, this ship is roughly the size of the US aircraft carriers operating at the end of WW II. And as the ship’s sponsor –- Lynne Pace, wife of Gen. Peter Pace, former Chairman of the Joint Chiefs –- put it to the veterans of the last USS America – a large deck carrier: “I know you (the crew of the former USS America) would love the name to go to an aircraft carrier, but this ship is a mini-aircraft carrier.”

The ship is optimized to operate the new aviation assets. Robert Hall, the ship’s captain, underscored the change in an exclusive interview:

The ship has been designed to support this next generation of aircraft, which is larger, and also we need to support greater sortie generation rates of which the F-35 is capable. The ship has been designed to have space to perform maintenance for the aircraft and to provide for extra fuel to support the sortie rates of which the aircraft is capable. We will have room for much greater amount of ordinance and storage of parts as well.

For those who miss the well deck traditional on an LHA, it is useful to go back to lessons learned at the huge Bold Alligator 2012 exercise. The Navy and Marines operated 16 Harriers off of a large deck amphib.

Although interesting in itself, the USS America is part of a broader allied effort. Allies are building ships of similar types and purposes, as well as various other ships that can work well with the America class. The Queen Elizabeth class and Giuseppe Garibaldi (551) will operate F-35 Bravos and are similarly sized to the America.

Other sea-based platforms such as those being built by the Australians, Spanish or French are important as well. For example, the French Mistral is being considered as a platform on which the Osprey could land.

Second, the USS Ford, the Navy’s next super carrier, is being developed synergistically with the USS America class. According to NAVSEA officers and designers, the workflow for the USS America involving the F-35 is being discussed regularly with the Ford officers and designers. There is a cross-fertilization going on between the two new large aircraft surface assets as significant as when Sims and Halsey rethought the battleship navy and began moving to the carrier navy.

Third, the C4ISR (Command, Control, Communications, Computers, Intelligence, Surveillance, and Reconnaissance) aboard the USS America and USS Ford are radically different from legacy ships. As the F-35 is deployed the synergy between the aircraft’s C4ISR and that deployed aboard the ship will become a central capability of the deployed fleet. This will affect not only our fleet but what the Brits and Italians will do as well.

Robbin Laird, a member of the Breaking Defense Board of Contributors, is an international defense consultant and owner of the Second Line of Defense website.