The EMP-Proof Truck: AM General Doubles Down On Humvee

SOUTH BEND, IND.: The US military replaced its Humvees in Afghanistan and Iraq, with heavier, better armored vehicles because of the threat from roadside bombs. But that approach may not work In a high-tech conflict, argues manufacturer AM General. You might want to go back to the Humvee. Why? Because it’s simpler. There are no electronic engine controls, no electronic braking, no circuitry that a sophisticated enemy could hack with malware, scramble with directed microwaves, or fry with the electromagnetic pulse from an atomic bomb or other source. 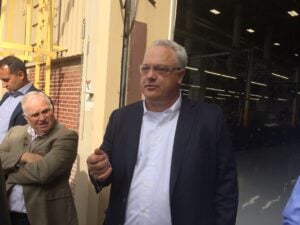 “It’s essentially bulletproof to EMP,” AM General’s CEO, Andrew Hove, told reporters he flew out his factory here for a pre-AUSA conference visit. “There’s nothing on the system that would lose functionality.” If you set off an electromagnetic pulse over South Bend, he said, the Humvees could continue to run, even as many more sophisticated vehicles glitch or go dead.

Of course the sophisticated electronics the Army installs on nearly all its vehicles for communications and navigation might well be affected, so the surviving Humvees would probably be cut off without radio or GPS. But at least they’d start. (And troops once again train with acetate maps…)

So, two years after losing the contract for the next-gen, high-tech Joint Light Tactical Vehicle (JLTV), AM General is doubling down on the Humvee and making a virtue of its simplicity. Sure, the company has upgraded the vehicle since its introduction back in 1984 with more powerful engines, tougher transmissions, and stronger frames. That increased the maximum weight of a fully-loaded Humvee from 9,000 lbs to 14,000 lbs now, dramatically increasing capacity for cargo, weapons, and armor – even as reliability has increased four-fold. 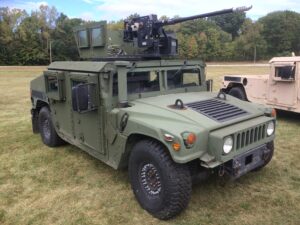 But even as it modernizes the Humvee, AM General proudly points to old-fashioned virtues it’s retained. The steering column turns the wheels using hydraulics – no electronic steering here. The brakes use a direct mechanical connection, without even any hydraulics (which can leak). There’s an automatic transmission, mercifully. But to activate a special mode for crossing the worst obstacles, for example, you don’t press a switch. You use both feet to press the brake and the gas at the same time, locking the differential so the tires all rotate at the same speed, rather than one spinning crazily while the other’s stuck. One combat veteran doing a test-drive with me was floored by the Humvee’s performance using this brake throttle modulation (BTM) feature. No one had ever told him it existed. 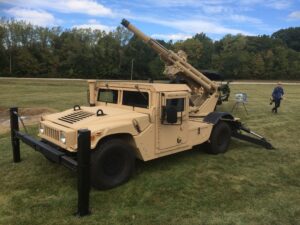 A 105 mm howitzer mounted on a Humvee.

So far, AM General’s “Keep It Simple, Stupid” strategy seems to be working. Last August, the Army awarded the company a $1.6 billion contract to buy Humvees for Afghanistan. This September, the Army awarded a $2.2 billion contract for “Afghanistan, Iraq, Ukraine, Jordan, Slovenia, Bahrain, Columbia, Bosnia and Kenya,” of which $550 million is already on order. The US Army has even restarted buying new Humvees for its own use, mainly in the National Guard, as well as overhauling and upgrading the more than 100,000 Humvees already in service.

The heavier, better-protected JLTV is the wave of the future, but it’s going to take 30 years to deliver all 50,000 ordered – which is still not enough to replace all the Army and Marine Corp’s Humvees. That’s a lot of vehicles to keep running. AM General is even investing its own money in new Humvee variants, from a narrower version that can fit inside a CH-47 helicopter, to an upgunned version with a 30mm cannon, to one mounting a 105mm howitzer.

There are limits, though, to how much the Humvee can be upgraded. The most problematic is protection. 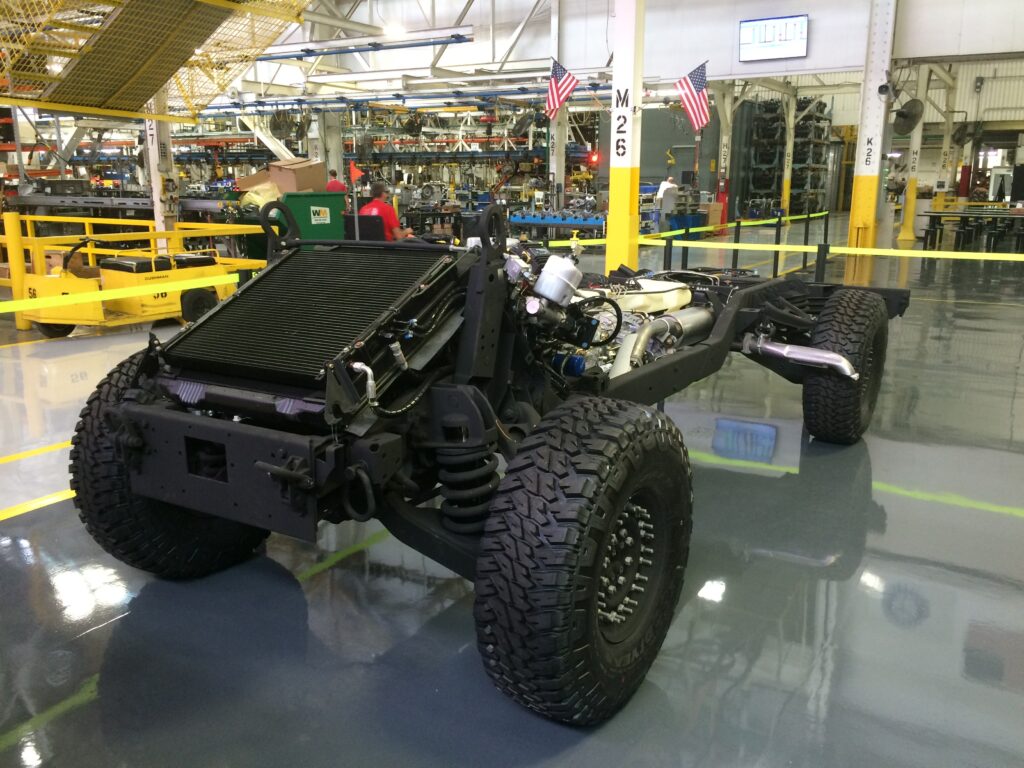 The standard Humvee chassis before a mission-specific body is installed.

AM General admits that even uparmored Humvees can’t survive roadside bombs the way larger vehicles can. In part, the difference is a matter of design. The Humvee is built like a civilian truck, with the passenger cabin, engine, and other components attached directly to a metal frame. You can layer an armored shell around the vehicle – underbody armor, side armor, top armor – but the shock from an explosion underneath still gets transmitted directly to the troops inside. The JLTV and kindred vehicles, by contrast, are designed from the inside out to divert the blast away from the passengers, who often ride in an armored capsule buffered from the underbody. 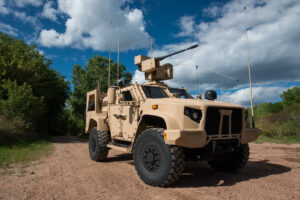 In part, though, the difference in protection is due to the difference in weight. The heavier the vehicle, the more energy it takes to send a lethal shockwave through it. (Force = mass times acceleration; increase the mass, and the same amount of force produces a less violent acceleration). The latest, most maxed-out Humvee can carry 14,000 pounds; that’s about what a JLTV weighs with no cargo or passengers aboard (curb weight). Earlier Mine-Resistant Ambush Protected (MRAP) trucks used in Iraq weigh much more; so does even the relatively lightly MRAP All-Terrain Vehicle (M-ATV) built for Afghanistan, the JLTV’s immediate ancestor.

“We can achieve significant levels of survivability and performance off the Humvee; it’s not going to get the same level of survivability as an Abrams tank,” Hove said. “A M-ATV’s derived from a six-ton cargo truck….. Its curb weight was almost 20,000 lbs.” 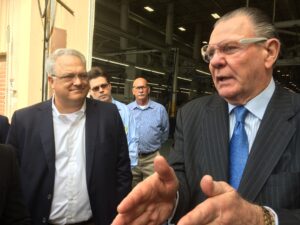 Weight, of course, comes with a heavy penalty. “The Army’s a nomadic organization; it has to move,” said retired Gen. Jack Keane, former Army Vice-Chief and now chairman of AM General’s board. In Iraq, he told the reporters at the Humvee plant, “we went to a single-point solution on force protection. In doing that, we traded off considerable mobility. We bought South African vehicles that were tanks on wheels that we had difficulty getting off a highway, just off on a (regular) road — much less be able to go cross country.”

Those heavy vehicles – even the JLTV – can’t be carried by a helicopter, which makes them unsuitable for airborne forces, added another retired Vice-Chief, Gen. John Campbell. He served in both the 82nd Airborne (paratroopers) and 101st Airborne (helicopter-borne) before becoming a member of AM General’s advisory board. “If you’re in the 82nd, if you’re in the 101st, you need to go someplace very quickly, you need to go by Black Hawk, you need to sling load (vehicles under) a Chinook,” he said. “You can’t do that with something other than a Humvee.” (In fact, AM General has come up with a narrower variant of the Humvee that can drive on board a CH-47 Chinook instead of having to be slung underneath). 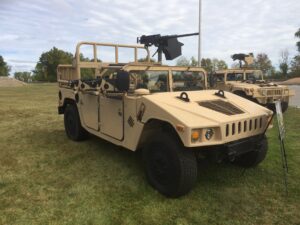 A narrower Humvee variant designed to fit aboard a CH-47 helicopter.

Overall, Campbell said, “the JLTV and the Humvee will be two completely different missions.” While JLTVs can carry frontline troops and scouts, he and Keane said, the much cheaper Humvees can play a wide range of supporting roles where the heavier vehicle isn’t needed: transport, cargo, ambulances, mobile nodes for radio networks.

This division of labor between JLTVs and Humvees, however, makes a key assumption: Not only will some areas of the future battlefield be consistently more dangerous than others, we’ll be able to figure out what they are, so we can allocate better-protected vehicles accordingly. 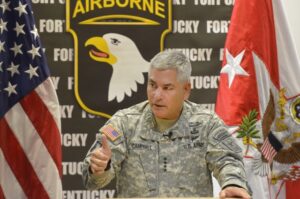 Back in the 1980s, when the Humvee was designed, that was a safe assumption. The Army’s AirLand Battle doctrine made a clear division between the frontline – where the fighting took place – and the rear area – where troops were unlikely to encounter enemy fire. Iraq and Afghanistan showed that distinction no longer held true: Some of the heaviest casualties occurred in rear area support units, many of them riding in Humvees. Today, the Army’s evolving Multi-Domain Battle concept suggests that troops may come under attack all the way back at their home bases. In such a conflict, some areas will be safer than others at any given moment, but sanctuaries can turn suddenly into kill zones.

So, for future commanders figuring out where to put different war machines – from Humvees and JLTVs to 25-ton Strykers, 40-ton Bradleys, and 70-ton M1 Abrams tanks – there may be no clear area where it’s definitely safe to use to their lightest vehicles. But they’ll have to figure out a way to use Humvees nonetheless, because it’s financially and logistically impractical to mount the entire Army in 70-ton machines. The Humvee will be in the toolkit for decades to come.