The End Of Advantage: Enemies May Catch Up With US Technology — Or Surpass It 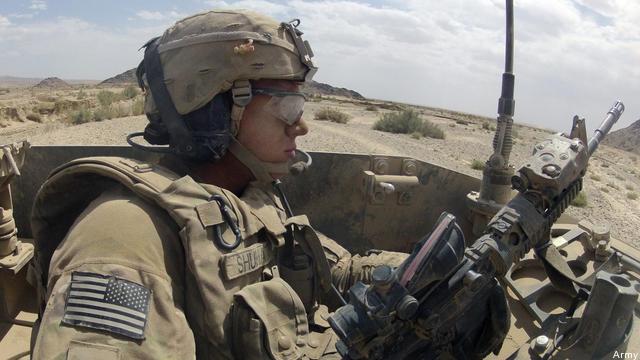 WASHINGTON: “We in the United States are a bit arrogant in thinking [that] we own the technology high ground,” the civilian told the assembled generals. “Technology doesn’t necessarily belong to us and where it goes is not necessarily in our hands.”

For six decades, the United States could count on being the planet’s preeminent economic and technological power. Now, the US Army is looking into the “deep future” past 2030, when China’s Gross Domestic Product is expected to have exceeded that of the US. At a recent Army seminar on “strategic trends” — which Breaking Defense was allowed to attend on the condition we not identify participants by name — scores of military officers and civilian experts wrestled with a world in which the United States may have lost not only its economic primacy but much of its technological superiority as well.

“Don’t expect too much from technology,” said one foreign officer. “You may have to fight occasionally at technical parity — and in fact, even technical disadvantage.”

[Click here to read the Army’s rebuttal to this story].

Even in the dark days of the 1950s, when the Soviet Union had a booming economy, the world’s most potent military, and a Sputnik-sized lead in the space race, Americans could always count on superior weapons to offset the enemy’s superior numbers. Better technology hardly makes for certain victory against determined and clever foes — consider Korea, Vietnam, Iraq, or Afghanistan — but it has been something the US has been able to count on, and has taken for granted, at every level of conflict from grand strategy to squad tactics. By 2030, however, for the first time since World War II, when American propeller planes were outflown by Me-262 jets and Sherman tanks were outgunned by Panthers, US troops might have to face an enemy who has better weapons.

The idea that militarily relevant technology, from missiles to GPS guidance, is proliferating ever more rapidly around the globe is not a new one. Nor is anyone predicting that the United States will be technologically backwards in 2030. But leading thinkers are increasingly concerned that, in a few key areas, potential adversaries, especially China, will erode America’s technological advantage, catch up, or even surpass us.

“There’re going to be a lot of factors that go into determining who has the military-technical advantage in 2030. I suspect it’ll still be us, but there are no guarantees,” said Andrew Krepinevich head of the influential Center for Strategic and Budgetary Assessments, speaking to Breaking Defense after a talk on strategy he gave Tuesday. “We still have the world’s best universities,” he said — though more and more of their students not only come from abroad but go back there after graduation — and “we have a dynamic, entrepreneurial culture that’s constantly inventing and reinventing.”

“Just because somebody steals your blue prints on how to build an F-35 doesn’t mean they can build it,” said Krepinevich, let alone operate it with tactical skill.

Nevertheless, he went on, advantages America has counted on since the end of the Cold War are at least going to diminish. In particular, Krepinevich told Breaking Defense, “I think we’re losing the dominant position we had in precision guidance.”

CSBA has been warning policymakers about a threat it calls “G-RAMM”: guided rockets, artillery, mortars, and missiles using imitations of US precision-guidance technology. Such gadgetry was costly and cutting-edge in 1991, when American smart bombs wowed the world, but it’s becoming cheaply and easily available today. There are similar concerns about unmanned air vehicles, since China, Iran, and even the Iranian-backed militia Hezbollah are now experimenting with their own reconnaissance UAVs.

Drones to spot targets and smart weapons to strike them have been the eyes and fists of America’s post-Cold War military machine. If adversaries can copy that combination, then the big, static airbases, seaports, and FOBs (Forward Operating Bases) that have underpinned US power projection for decades become horrifically vulnerable. Advanced radars and surface-to-air missiles could threaten our stealth aircraft, once seen as invisible silver bullets. Shoulder-launched anti-aircraft missiles, while unavailing against stealth fighters, could cripple the transport planes and helicopters essential to military mobility. Hackers and jammers could cut the control links to our drones. In one Army wargame this summer, an air- and sea-borne intervention against a well-armed enemy resulted in almost 500 (simulated) US and allied casualties in the first week.

Krepinevich, CSBA, and company argue that the counter to hostile drones and precision-guided weapons is directed energy: lasers. Anti-missile lasers can shoot down incoming projectiles at the speed of light, and they get infinite free reloads as long as you have electrical power, compared to current anti-missile missiles like the Patriot that are little faster than the weapons they are trying to intercept, significantly more expensive, and only get one shot. But lasers are far from a battle-ready weapon — and sophisticated foes may well find ways to counter them.

There is a “US cultural bias to searching for technical solutions, what I might ungenerously characterize as a belief you can invent your way out of any problem,” said the foreign officer at the recent Army conference. But technology has its limits, as when Donald Rumsfeld’s vaunted “revolution in military affairs” and the tactics of “shock and awe” failed to pacify Afghanistan or Iraq. “I’m not a Luddite,” said the foreign officer, “but recent experience shows significant, even huge technology overmatch delivers very modest tactical advantage.”

Badly burned by high-tech fiascoes like the cancelled Future Combat System, Army thinkers are no longer counting on revolutionary technologies, even as they ponder the “deep future” past 2030.

“For example,” said Col. Kevin Felix at a recent roundtable with reporters, “there’s lots of folks that think we can have robotic forces that will operate independently, with artificial intelligence.” After consulting experts at the strategic trends seminar, however, Felix, the chief of TRADOC’s Future War Division, is scaling back expectations for what battlefield robots can do. “We will be enabled, but there will be some limitations,” he said. “No Terminators.”

That technology has its limits, and that others might match or surpass us, hardly means the US should shortchange research — quite the contrary. In times of strategic uncertainty like today, “S&T, science and technology, is the last thing you want to take down,” despite the short-term budget pressure to do so, said Lt. Gen. Keith Walker, chief of TRADOC’s Army Capabilities Integration Center (ARCIC) and Col. Felix’s boss, in a conversation with Breaking Defense after the strategic trends seminar.

Nor is it easy to figure out a few key technologies to invest in, like lasers, and economize on the rest — as the seminar participants discovered when they tried to triage the Army’s S&T investments, only to find more and more areas looked indispensable. “If we went down to three or four things, we put ourselves at great risk, because no one here has that understanding of what those three or four things should be,” said one civilian.

The future is just too uncertain. And the Army has just started thinking about systematically, after years struggling just to keep up with the wartime demands of the here and now. In 2011-2012, the service held a series of future-conflict wargames, studies, and seminars collectively called “Unified Quest,” but the focus was on 2020, less than a decade away.

“Last year, we were just trying to get started again, because we had stopped thinking about the future,” Lt. Gen. Walker told Breaking Defense. Only this fall did the Army begin looking out past 2030, when the rise of China and the proliferation of technology makes for a very different world.

So if the Army can’t predict the future, and if it can’t count on technology, what can it depend on? “The Army must act to leverage its greatest war dividend,” the new Capstone Concept says, “the experienced leaders and Soldiers who have learned invaluable lessons and gained irreplaceable experience during the last decade of extended conflict.”

“It is our human capital that is essential,” said Maj. Gen. Bill Hix, who works for Lt. Gen. Walker as ARCIC’s Director of Concept Development and Learning. “And it’s not just the human capital of the soldier,” he went on. “[It’s also] making sure that as an Army, as a Department [of Defense], and as a nation, we work to attract the brightest minds into the fields of science and technology so that we do maintain that edge.”

A nation’s technology and economy matter immensely in war, but they don’t translate directly into victory. It takes a thinking community of national security professionals, both uniformed and civilian, to convert technological and economic potential into military power.

“I’ll give you an example, Sydney,” said CSBA’s Krepinevich. “It’s kind of like the period between the World Wars, where everybody had aviation, everybody had mechanization, everybody had radios — [but] it was the countries that figured out how to do adapt that best to military purposes that were the big winners.”

The most infamous “big winner,” of course, was Nazi Germany. The concept called Blitzkrieg combined airplanes, tanks, supply trucks, and radio communications into a fast-moving war machine that overran Poland, France, and much of Russia. Imperial Japan mastered the aircraft carrier, a technology invented by the British, and employed it to devastating effect at Pearl Harbor. But the United States also experimented with airpower, seapower, and armored ground war in the 1920s and ’30s, despite economic problems that make the present look pretty flush. And it was the US, alone of all the countries in the world, that mastered the tactics and technologies of amphibious warfare that proved essential in both the Pacific theater and Normandy.

That intellectual work, experimentation, and investment laid the foundations for America’s victory against opponents whose technology was at least as good as ours. It’s the same kind of forward thinking, under similar budgetary constraints, that the Army is trying to get started on today.