The iPhone Goes To War: Army Explores Shift From Military To Commercial Networks 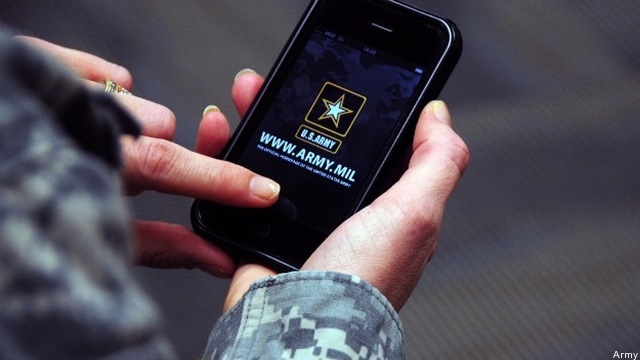 NATIONAL DEFENSE UNIVERSITY: It just might be iPhone time for the world’s most powerful army,.

As defense budgets shrink and commercial networks grow, top brass from Army Chief of Staff Gen. Ray Odierno on down are questioning the service’s current plan to keep developing custom-built, military-specific, and extremely expensive communications networks. If groups like al-Qaeda, the Taliban, and Hezbollah can coordinate their operations over civilian cellphone and computer networks — networks they don’t have to pay for — why can’t the Army?

I can pull out my iPhone, said one visibly frustrated four-star general at an Army conclave here today, text friends around the world from Afghanistan to Hawaii, and “get an answer back in about a minute.”

“Yet,” he went on, “when we deploy now, we’ve still got to put 100 trucks on the ground” full of Army-specific “command, control, communications, and computers” (C4) to set up a military-only network.

That doesn’t just take a lot of money. It requires limited space on Air Force and Navy transports that could be used to move combat troops, weapons, and supplies. It takes precious time to set up before the command post is ready to command troops in the fight. “Why?” asked the general. “Why can’t I leverage the worldwide network that’s been established for command and control?”

“I don’t want to throw what we’re doing under the bus,” he said, “[but] we get so involved with our own networks that we’re not leveraging other capabilities.”

Yes, a commercial network is less secure than an Army-only one. Instead of securing the whole network, though, why not just encrypt the data you send over it? Senior government cybersecurity experts say our enemies are inside many of our networks already, so we’d better encrypt the data anyway.

Yes, commercial networks don’t reach all the places the Army may have to fight, but they keep growing. Even today in a place as backward as Afghanistan, where only 28 percent of the population can read and write, about a third of the population own cell phones.  When the US tried to shut down cell towers the Taliban was using to coordinate attacks, we pissed off so many Afghan civilians we had to stop.

Yes, commercial networks may never serve soldiers’ needs as well as one designed and built specifically for the military — but the military doesn’t have to pay to design and build them.  With the Army likely to bear the brunt of the 10-year, $500 billion cut in defense spending imposed by the 2011 Budget Control Act, commonly known as sequestration, this last argument just might be the clincher.

It’s easy to understate how technically difficult it could be for the Army to rely on networks that it doesn’t own. It’s hard to overstate how big a change in strategy it would be.

Since 1999, the Army’s top two priorities have been new armored vehicles to replace war machines that entered service circa 1980 — especially the M2 Bradley troop carrier, which proved fatally vulnerable to high-end roadside bombs supplied by Iran — and what it calls “the network,” an umbrella term for a host of communications upgrades, from the handheld Rifleman Radio to networked brigade headquarters. Under the pressure of sequester, the Army’s already putting its new Ground Combat Vehicle on indefinite hold, extending the current “technology development” phase instead of moving ahead to build working prototypes. But today was the first time in 14 years I’ve heard “the network” called into question.

The “Senior Leader Seminar” held here today ranged across a host of subjects, from arming robots to improving education for young officers. But running throughout the sessions was an urgent emphasis on making the Army more able to respond rapidly to crises around the world — preferably to calm things down before someone starts shooting — with anything from a small advisor team to a tank division.

That’s a big change from Afghanistan and Iraq, where the US had a decade-plus to learn the local culture, figure out the key players and build up massive infrastructures for communications and supplies. Units knew when and where they were deploying months in advance, and on arrival they could settle into well-established bases. By contrast, an “expeditionary” force would have to pack everything it needed into cargo planes and transport ships. Then it would need to unpack quickly on arrival — possibly while under fire — and set up shop in an area with no friendly bases and, often, no functioning phone network, no power grid, and no clean water.

To keep such expeditionary forces from going in blind, the regular Army is working more closely with the Special Operations Command, SOCOM, which has teams gathering intelligence and training foreign partners in over 80 countries. The Army is also sending out its own “regionally aligned forces” to work with US allies and would-be allies on everything from combat training to building bridges. And it’s crucial to build such local relationships and knowledge before the shooting starts: Americans died for the lack of them in Afghanistan and Iraq.

But actually getting significant combat forces to the crisis is still a matter of physics, not culture. The smaller the force and the lighter the equipment, the faster it can move. Back in 1999-2009, until the ill-fated Future Combat Systems program was cancelled, the Army focused almost naively on shrinking the combat vehicles themselves. FCS was hamstrung from the start by a requirement — ultimately abandoned — to fit everything in the Air Force’s standard C-130 transport plane.

To modify a hoary saying, however, amateurs talk weapons but professionals talk logistics. The Army realized what it really needed to shrink was not so much the tanks themselves as the amount of fuel, spare parts, and support troops they required. And in the modern Army, an increasingly crucial part of that support echelon consists of radios, computers, the fuel-hungry generators to keep them powered, and the technically trained soldiers to keep them working. That’s what’s in those “hundred trucks”: an entire electrical and communications infrastructure.

Some officers in attendance today were clearly unsettled by the idea of replacing all those trucks with a few portable gadgets that plug into existing commercial networks. “If you show up and they turn it off on you,” said one, “what’s your manual backup?”

(This is an attitude embedded in the US military — especially in the infantry:Do not take away my maps and other basic backups. If everything else fails, I gotta be able to keep fighting with the basics.)

Most of our adversaries are already relying on those commercial networks to coordinate their operations, came one reply: If they shut those networks down, they’re at least as blind as we are — and in the land of the blind, the US Army is still king: “I’d put our guys up against that any day.”

Perhaps, offered another general, “there’s a sweet spot.” The fast-moving, lightweight forces that are first to arrive on-scene can carry minimal electronics and rely on plugging into the local civilian network. Then follow-on reinforcements can bring in more powerful communications gear, the same way they’d bring in heavier weapons and more supplies.

“We need to be able to rely — where it makes sense — on existing networks,” said Maj. Gen. Bill Hix of of the Army’s Training and Doctrine Command (TRADOC), speaking at an on-the-record roundtable with reporters after the main event. (Reporters could attend the “senior leader seminar” itself on the condition that they not attribute quotes to anyone by name). When Hix headed a command that trained and advised Afghan police and soldiers — who don’t have the  security clearances or the technical skills to access classified US networks — “[we] leveraged the Afghan cell phone network,” he said. “Our data rode their system [and] we secured the data,” instead of trying to build an entire secure system just for the military.

So “we’ve done that in a small example,” Hix said. What Gen. Odierno and company are talking about, he added, is on a much larger scale: “We need to be able to do the same thing on the global communications network.”

If the Army can really do that — and there’s no guarantee they can — the service won’t have to spend billions building its own communications infrastructure and hauling it wherever troops have to go. Instead of buying a network, the Army just might be able to rent.