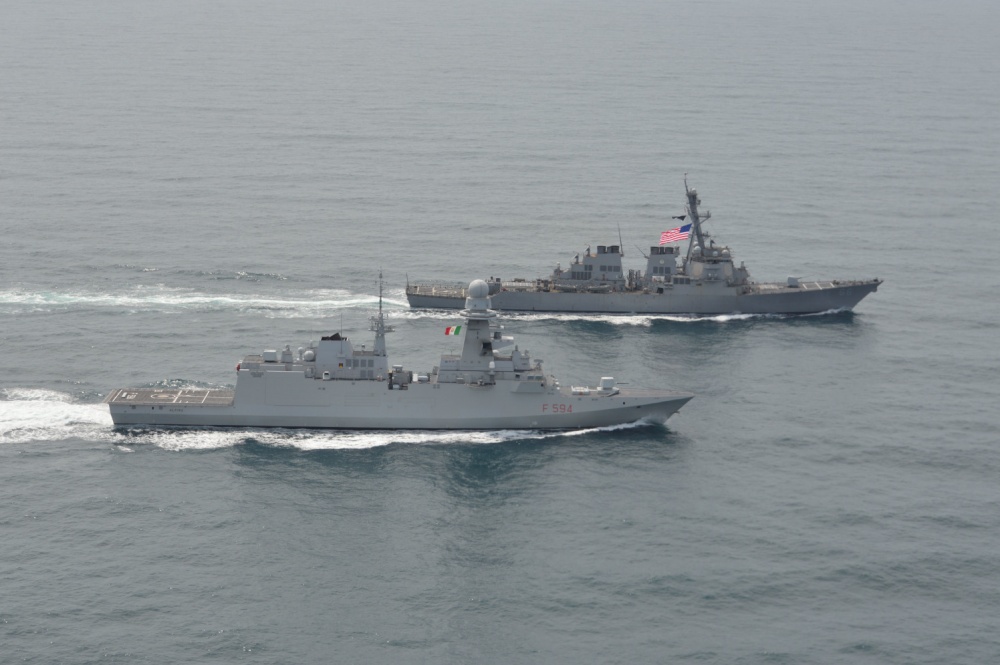 BALTIMORE HARBOR: The U.S. Navy is in the market for a new frigate, and the ship of the future might be sitting pierside in Manhattan.

The Italian frigate ITS Alpino steamed out of Baltimore harbor Wednesday evening to spend a few days in New York and Boston, the final leg of an East Coast tour that also saw it conduct training operations with the USS Gonzalez off the Virginia coast.

For Italian shipbuilder Fincantieri — and its Marinette, Wisc.-based subsidiary, Fincantieri Marine Group, — the tour is a prime opportunity to show off the capabilities of the ship that is competing for the contract to build the Navy’s next guided missile frigate, known as the FFG(X).

During a tour of the ship on Wednesday in Baltimore, one of the things that struck me first was the amount of space belowdecks. Company representatives said they used lessons learned in the commercial shipbuilding world to ensure that sailors could reach critical machinery and hardware quickly, without having to take apart parts of the ship to perform repairs. That means wide walkways with wires tucked away (though visible) and lots of machinery stacked along the walls that can easily be pulled out, repaired, or replaced.

Since the ship is networked to a degree that we haven’t seen in U.S. naval vessels, sailors are able to access the internal network from almost anywhere onboard by literally plugging a laptop into ports located throughout the vessel and entering their unique login information. It’s an innovation that keep the crew connected, and gives engineers the ability to monitor and adjust systems from wherever they are. 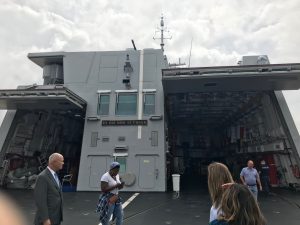 That plug-and-play networking, along with a fire control system that uses overhead sprinklers and heat-activated cameras to alert the command center when a fire has broken out, allows the crew of about 140 to identify and isolate any problems quickly, something that Vice Admiral Richard Hunt (Ret.), Fincantieri Marinette Marine’s chief strategy officer, told me was critical for a ship of this size with a relatively small crew.

Hunt pointed to the double helicopter hangers and the large flight deck that, unlike U.S. ships, doesn’t require sailors to go outside to help the aircraft land, since the helo lands on a claw that locks the aircraft in place, and then retracts into the hangar bay. If the U.S. Navy chooses the Aegis-equipped version of the ship Fincantieri is pitching, Hunt said he envisions the second hanger possibly being used for unmanned systems, even though the Navy has stated it wants the FFG(X) to have room for one MH-60R Seahawk helicopter.

The Alpino is the anti-submarine warfare version of the 472-ft. frigate, and the ship had pulled into Baltimore after conducting training operations with the destroyer USS Gonzalez off the coast of Virginia, where the ships conducted visit, board, search and seizure exercises and communication drills.

Both the U.S. Navy and its NATO allies are scrambling to rebuilt their ASW capabilities after allowing them to atrophy after the end of the Cold War. New rounds of Russian rotations into the Mediterranean, and with more Russian submarines moving through the North Atlantic, the Navy is looking to its new frigate to bring back its towed arrays and other measures that are newly in demand to track those boats as they move underwater.

The Alpino has already tracked Russian submarines in the Mediterranean, the ship’s captain, Cmdr. Davide Da Pozzo, told me, and has also run counter-piracy missions off the Libyan coast.

While the Alpino didn’t participate in the air and cruise missile strikes on the Syrian regime’s chemical weapons stockpiles in April, the French variant of the FREMM frigate, the Languedoc, lobbed three cruise missiles into Syria as part of the U.S./U.K./French assault. That makes Fincantieri’s offering to the FFG(X) program the only one with any relevant combat experience.

The French ship boasts 32 VLS launch tubes, as opposed to only 16 on the Alpino. The U.S. Navy will want at least 32.

Rear Adm. Pier Federico Bisconti, the Italian navy’s chief of plans and operations, was onboard the ship for the day and told me that the ship’s modularity has been the real gamechanger for his fleet. Over the past year, the Alpino has tracked Russian subs in the Mediterranean, conducted counter-piracy operations off the coast of Libya, run drills with an American Aegis destroyer, and has been able to do so with only minimal refitting.

Bisconti said the software in the ship was designed to be easily upgradable, and the space in the engine rooms and throughout the vessel makes it relatively easy to repair quickly, something which cuts down on time and expense when it comes to maintenance, and also reduces stress on the crew — especially as the navy operates in a more distributed environment where ships will stay networked, yet operate at greater distances.

But the crew is busy, and that’s where the large and quiet berthing becomes critical, added Da Pozzo. Speaking to me in the officer’s lounge — featuring one of the ship’s five espresso machines — Da Pozzo said that there are usually about four crew members per berthing compartment, each of which comes with its own shower and is wired for ease of networking.

One particularly interesting aspect of the ship is a separate command center set apart from the bridge, built for visiting commanders and their staffs to make use of. Da Pozzo and Bisconti said the room — fully networked with a large conference table and a host of built-in electronics and spaces for laptops to be plugged into the system for both classified and unclassified data to be processed — is critical for the dozens of special operations forces who can be housed onboard, or for visiting brass to use, making each FREMM a mini flagship.

Not only is there extra berthing for special operators or Marines, but each ship carries two rigid-hulled inflatable boats for commando ops — a seven-meter one to starboard, and another 11-meter boat to port.

The ship also boats 76mm guns fore and aft, while the U.S. navy wants to put the MK110, a 57mm gun, on the winner instead. Along the port and starboard rails amidships, the Alpino has TESEO anti-ship missile launchers installed, but there is enough space to swap those for other anti-ship missile systems.

The Navy plans to make an award in the program in 2019, and the other competitors have also put forward mature designs. Austal USA has offered the Independence-class LCS; General Dynamics’ Bath Iron Works the Navantia Álvaro de Bazán-class F100 frigate; Lockheed Martin and Fincantieri Marinette Marine the Freedom-class LCS; and Huntington Ingalls Industries has only released artists’ renderings of what it might compete. Each company was awarded $15 million contracts to provide the Navy with designs. The Navy plans to buy 20 frigates starting in 2020.