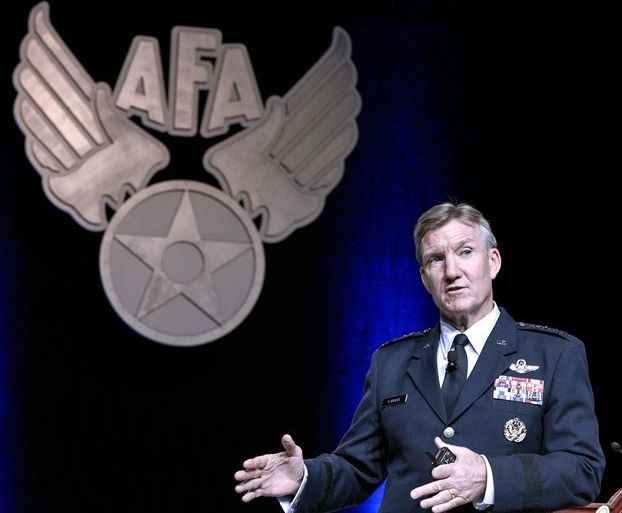 We interviewed Gen. Hawk Carlisle, the commander of Pacific Air Forces, at the Air Force Association’s Pacific Forum in Los Angeles, about the challenges facing the U.S. and its allies in shaping a 21st century Pacific defense strategy.

The general emphasized the central role engaging our allies is playing for the Air Force in the Pacific.

“The chief (of staff of the Air Force) has underscored that as resources are constrained we need to become closer with our allies. I would add that we need to do this as well for strategic reasons. Our allies in the Pacific are always in the frontline.  This means that our task is to have credible forward presence for deterrence working in close coordination with those allies.”

In the interview, he noted that the U.S.-Japanese relationship is undergoing a fundamental transformation. The Japanese are clearly rethinking their defense posture and he argued that the U.S. was working much more deeply and comprehensively with the Japanese defense forces than even two years ago.  For example, “We have moved our air defense headquarters to Yokota Air Base and we are doing much closer coordination on air and missile defense with the Japanese to deal with a wider spectrum of regional threats.”

The Air Force is stepping up its collaborative efforts and capabilities with key regional air forces, including with Australia, Singapore, South Korea and Japan. And Carlisle emphasized that the service is pushing to enhance cross-collaborative capabilities among those allies as well.

While trying to get the allies to work more closely with each other, the Pacific commander also underscored that the US Air Force is adopting allied innovations.

“Singapore is doing very innovative things with their F-15s, notably in evolving the capabilities of the aircraft to contribute to maritime defense and security. We are looking very carefully at their innovations and can leverage their approach and thinking as well,” he said. “This will certainly grow as we introduce the fleet of F-35s in the Pacific where cross national collaboration is built in.”

Forging paths towards cross-domain synergy among joint and coalition forces is a key effort underway.

The US Army and Air Force can better integrate their missile defense capabilities, to expand defensive and offensive performance. During his presentation, Carlisle highlighted the example of a rapid deployment of an Army missile defense battery for the defense of a key Air Force airfield, calling this kind of capability central for now and a building block for the future.

Second, he described the ability of advanced aircraft, in this case the F-22, to provide forward targeting through its sensors for submarine based T-LAMS (cruise missiles) as both a more effective use of the current force and a building block for the emergence of the F-35 fleet in the Pacific.

Third, the Air Force is learning from the Marines about ways to become more expeditionary. A key example he cited is the “Rapid Raptor deployment.” The idea is to take four Raptors and deploy them with a C-17 and to rotate across the Pacific to go to the point of need for implementing missions. This provided both a tool for enhanced survival and an enhanced capability to apply the force associated with a fifth-generation aircraft as well.

His focus was upon leveraging Air Force and joint assets in ways that would make that force more expeditionary and more effective in providing for cross-domain synergy.  He noted that the combination of a large deck carrier with the Air Force with the Amphibious Ready Group and Marine Expeditionary Unit (ARG-MEU) air assets when conjoined within a distributed strike package provides significantly greater capability than when each is considered on its own.

He sees this reshaping approach as central to shaping the distributed operations approach emerging as the F-35 fleet is deployed over the decade ahead.

“The F-35 is the finest sensor-enabled aircraft ever built. The F-35 is orders of magnitude better than the F-22 (which is the greatest air to air fighter ever built) as an electronic warfare enabled sensor-rich aircraft.  We already are working synergy between F-22s and fourth generation aircraft to provide greater fidelity of the information shaping air combat operations. With the F-22 and F-35 combination and the folding in of on-orbit information and surveillance systems, we will be able to generate more synergy across the fleet,” the general told us.

The other advantage of the F-35 is its commonality across the services.  “We are already working on greater synergy among the air power services; with the F-35 and deploying common assets in a dispersed fleet, the efforts we are making now for today’s conditions will only lead to more effective capabilities for tomorrow’s crises as well.”

The general sees the addition of the new Long Range Strike aircraft as informed by the decade ahead in shaping the new approach.

“The new bomber is really a family of long range strike systems.  Taking the approach towards synergy, and accepting your proposition that no platform fights alone, the next-generation bomber really is about making the entire force more lethal and more effective, not simply adding a new platform.”

He underscored that with the addition of the F-35 to the F-22s already deployed in the Pacific, the kind of transformation he envisaged as the new bomber gets folded in during the decade after next will accelerate.

“When you bring Raptor and F-35 into the mix you make every one of the platforms better in terms of its performance for the joint force,” he told us. “And referring back to your concept of S Cubed (Stealth, Sensors, and Speed), when you put those two together with long range strike the synergy unleashed by S Cubed will be significantly enhanced as well.”