The V-22 is Safer Than Helos, Effective, Says Man Who Wrote the Book 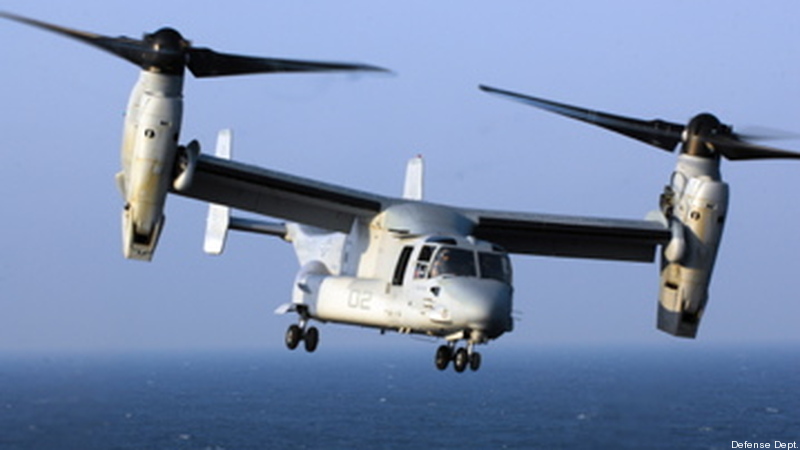 I commissioned this story from one of the foremost — if not the foremost — independent authorities on the V-22 because I thought it important to address the basic question: is the V-22 worth the lives and treasure it has cost America? The answer by reporter Richard Whittle — the man who literally wrote the book on the Osprey — is a resounding yes. That yes, I believe, should be taken note of by those less expert who reside at august institutions such as the New York Times, who persist in viewing the V-22 as a “troubled” aircraft. But enough of that. Read Richard’s piece for as close to ground truth on this issue as we are likely to get. The editor.

Once upon a time, the evil ogres of the military-industrial complex spawned a mutant flying machine, a freakish helicopter-airplane hybrid so dangerous and costly it deserved to die. Yet tribes of pork-addicted toadies and blind intellectual dwarfs shielded the beast from knights in shining armor who sallied forth tirelessly — heavily armed with GAO reports — to slay it.

That’s the fairy tale the V-22 Osprey’s bitterest critics like to believe, but the facts about the tiltrotor transport, which the Marines fought a quarter of a century to get into service, tell a far happier story. This ugly duckling is turning out to be a swan.

The Marines and the Air Force Special Operations Command have been flying Ospreys in combat zones nearly four years now and they love them, for while the V-22 isn’t a very pretty bird to look at, it has a graceful and extraordinary way of flying. It tilts two big rotors on its wingtips upward to take off and land like a helicopter but swivels them forward to fly like an airplane. That lets it cruise at nearly 290 miles an hour – more than twice as fast as military helicopters, whose top speeds are limited by the aerodynamics of rotors to about 140 to 175 mph.

By the time the Marines first put the Osprey into service in Iraq in 2007, though, it had cost more time, money and lives than any other piece of equipment the Corps has ever bought — 25 years, $22 billion and 30 deaths in crashes during its development. The Osprey was a very ugly duckling.

Since then, the saga has taken a very different turn, but many of the Osprey’s loudest critics – notable among them the New York Times editorial page – went to sleep in the middle of the story. In February, the Times declared that “the unsafe V-22 Osprey aircraft should…be scaled down now.” In April, the Times again called for cutting the “accident-prone V-22 Osprey.”
Labeling the Osprey “unsafe” and “accident-prone” could be justified a decade ago, when two of the three fatal crashes that occurred during its development had just occurred. Yes, that number is correct; there were only three fatal crashes before the Osprey went into service. Thirty people died in them because the Osprey is a troop carrier, and 19 Marines – 15 of them passengers – were killed in one star-crossed test flight alone. After the last of those terrible crashes, though, the Pentagon grounded the Osprey for 17 months – and fixed what was wrong with it.

As I described in The Dream Machine: The Untold History of the Notorious V-22 Osprey, between 2001 and 2005, the Osprey was redesigned and retested. Sloppily laid out hydraulic lines were rerouted, putting a stop to frequent and dangerous leaks. Flaws in flight control software, which in combination with a hydraulic leak had caused one fatal crash, were fixed. A trio of brave test pilots deliberately and repeatedly flew the Osprey into the little-understood aerodynamic condition that caused its worst crash and figured out how a pilot could get out of it. Cockpit warning devices were installed to keep future pilots from putting an Osprey into this “vortex ring state” in the first place.

The result is that Rep. Lynn Woolsey, D-Calif., unwittingly spoke the truth in May when she futilely tried for the umpteenth time to cut the V-22 from the defense budget by arguing that the “Osprey’s mishaps have become practically the stuff of legend.”

“Legend” is the right word. Since Dec. 11, 2000, the Osprey has suffered one fatal accident – one in 11 years. On April 8, 2010, an Air Force V-22 hit the ground rolling half a mile short of its intended landing zone while carrying Army Rangers on a night raid in Afghanistan, then flipped over onto its back after its front wheels hit a ditch, killing four of the 22 souls aboard. Other than that, the only Osprey since 2000 to suffer a “Class A Mishap” – an accident causing fatalities, permanent disability or more than $2 million in damage – was a V-22 from the Marine training squadron in North Carolina that made an emergency landing on Nov. 6, 2007, after a dirt and dust filter at the mouth of one of its engines started a fire. No one was injured in the incident, and the design of the filter, known as an Engine Air Particle Separator, was subsequently modified.

Sadly, the helicopters the critics would buy instead of Ospreys can’t claim such a sterling safety record. Compare the record of conventional helicopter safety with the Osprey. Since Oct. 1, 2001, the military has lost 405 helicopters worldwide at a cost of 583 American lives, and less than one third of those were brought down by enemy fire. Those figures include the 30 U.S. troops killed Aug. 6 when Taliban insurgents apparently shot down a CH-47 Chinook transport with a rocket-propelled grenade. The statistics also include 20 other American deaths since 2001 in six losses of CH-46 Sea Knight helicopters — the primary aircraft the Marines are buying the Osprey to replace.

The redesigned, retested Osprey’s safety record is so good that it’s actually the safest rotorcraft the Marine Corps flies, based on Class A mishaps per 100,000 flight hours. Those are official Naval Safety Center statistics.

Given that record, anyone who calls the Osprey “unsafe” or “accident-prone” these days either hasn’t bothered to learn the facts or is willfully ignoring them.d

One reason for the Osprey’s great safety record is that while the Marines and Air Force have flown their V-22s for roughly 20,000 combat hours since 2007, not one has been shot down, though some in Afghanistan have been hit by 7.62mm rounds, the type fired by AK-47s, and they all returned to base safely. Why things don’t happen is often impossible to prove, but one probable reason for this is that it may be harder to hit a V-22 than a helicopter with the sort of weapons at the Taliban’s disposal. The Osprey takes off and lands much the same way as a helicopter but can get out of small arms range quickly when leaving a landing zone by converting to airplane flight and climbing. Marine Ospreys also spend most of their time in the air at 8,000 feet or more, well above most threats. Helicopters generally fly low in combat zones because they’re slower, and hugging the ground makes it harder for the enemy to see them in time to shoot at them. Unlike flying above 8,000 feet, though, flying low doesn’t make it impossible to get hit by small arms.

The Osprey’s capabilities are saving lives in combat in other ways, too. Just ask the F-15E pilot who was picked up by an Osprey in Libya last March after bailing out of his aircraft. Two Marine V-22s sent from the USS Kearsarge covered the 150 or so miles between him and the ship in about 45 minutes and got him to safety before dictator Moammar Gaddafi’s forces could find him.

The only valid reason to oppose the Osprey these days might be cost, but many of the V-22’s critics have trouble keeping up with the facts on this point, too.

“The V-22 Osprey helicopter has been long hampered by cost overruns,” the liberalish Center for American Progress declared in early July, repeating history as if it were current news. True, the Osprey suffered plenty of cost overruns when it was still an ugly duckling, and it cost a lot to correct its original inadequacies. But since 2008, when the Naval Air Systems Command signed a five-year contract with co-manufacturers Bell Helicopter and Boeing, the program has actually enjoyed substantial cost underruns — savings Bell and Boeing project will amount to around $200 million over the life of the $10.9 billion deal, according to a senior official who’s been briefed on the figures. Costs have come down because Bell and Boeing have learned how to make the aircraft more quickly, and thus cheaper, and NAVAIR has subjected the Osprey to a stringent cost reduction campaign.

On Aug. 4, Bell-Boeing gave the government a proposal for a second five-year contract to produce the last 122 Ospreys needed to give the Marines and Air Force the 410 those two services plan to buy between them. The price the companies offered is secret and subject to negotiation, but by law, the government can’t sign such deals unless they offer “substantial savings” over a series of single-year contracts for the same period. By informal congressional fiat, “substantial savings” means at least 10 percent.

As the Marines, the Air Force, NAVAIR and Bell-Boeing gain more experience with the 21st Century Osprey, its operating expense is also coming down. Over the past year, its cost per flight hour declined from more than $11,000 an hour to about $9,500, according to Marine Col. Greg Masiello, the program manager at NAVAIR.

At this year’s Paris Air Show, Masiello also unveiled an analysis showing that because of the Osprey’s greater speed, which means greater range, it can be a far cheaper way to transport troops in a war zone than a utility helicopter, such as the Army’s UH-60 Black Hawk, the alternative critics often advocate. According to this analysis, to carry a company of troops requires either four Ospreys or sixteen helicopters. The Ospreys could deliver those troops 250 nautical miles in one hop, but the helicopters would have to stop at a Forward Arming and Refueling Point, or FARP, which requires more people to operate and guard the facility and to deliver fuel to it via ground convoys. Add up all the expenses avoided by using four Ospreys instead of 16 helicopters and the savings are about $224 million, Masiello said.

Another internal Marine Corps analysis done last year that employs a measure of efficiency favored by civilian airlines – cost per seat mile, meaning cost per flight hour per passenger per mile – found that the Osprey’s speed and range make it much cheaper on that basis than Marine Corps and Navy helicopters. Using the Osprey’s fiscal 2010 flight hour cost of $11,651 per flight hour, this study pegged the 24-passenger V-22’s cost per seat mile at $1.76 compared to $2.84 for the Navy’s seven-passenger MH-60S Black Hawk, $3.17 for the 12-passenger CH-46 Sea Knight, and $3.12 for the 24-passenger CH-53E Super Stallion.

Against that background, foreign interest in buying Ospreys, which evaporated after the crashes of 2000, is warming up. Israel recently showed serious interest by sending a team of experts to New River Marine Corps Air Station in North Carolina to spend some time kicking the tires and flying the Osprey. Bell-Boeing says as many as a dozen nations may end up buying V-22s. This suggests that those who take the time to learn the latest facts about the Osprey are impressed. And that’s no fairy tale.