They Hold The Line: Mattis Gives Meaning To Memorial Day 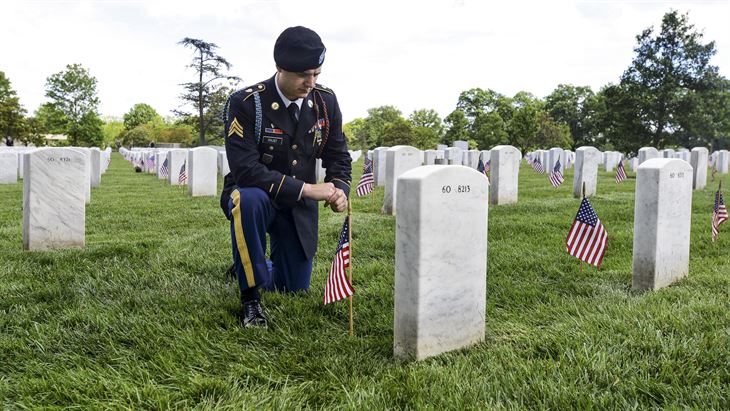 At Breaking Defense we read and hear a lot of speeches by generals. Few of them amount to a hill of beans, which is usually the intent of the person delivering the speech. Make no news, unless you’ve got a clear message to send is the rule hewn to. Well, we got a good one worthy of Memorial Day thanks to Defense Secretary Jim Mattis.

Mattis spoke Saturday to the graduating class at West Point and sent a clear message to the entire military, as well as to our allies, friends and competitors: “free men and women will volunteer to fight, ethically and fiercely, to defend our experiment that we call, simply, ‘America.’”  They will “hold the line.”  The video below includes the speech or you can read it.

Here’s the speech, as prepared:

Distinguished guests, ladies and gentlemen: what a day…

It is a great honor to be here today at West Point, one of the foundational keystones of our nation, and to join you on behalf of our commander-in-chief, President Trump, to pay his respects, and the respects of the American people, to the Military Academy’s class of 2017.

I would never have imagined when I joined the military at age 18 that I’d be standing here, nor can you anticipate where you’ll be many years from now.

By the time this class was in first grade classrooms in every state in our union, our country had been thrust into a war by maniacs who thought by hurting us they could scare us. Well we don’t scare, and nothing better represents America’s awesome determination to defend herself than this graduating class.

Every one of you could have opted out. You’d grown up seeing the war on ‘round-the-clock news. There was no draft. Colleges across this land would have moved heaven and earth to recruit you for schools that would never make such demands on you as West Point, starting with Beast Barracks, an aptly named introduction to the long gray line, creating American soldiers who are at their best when times are at their worst…

Today in honoring you graduates, in celebrating your achievements and giving thanks for your commitment, we can see clearly your role in our world.

You graduate the same week that saw the murder of 22 innocent young lives. Manchester’s tragic loss underscores the purpose for your years of study and training at this elite school.

For today you join the ranks of those whose mission it is to guard freedom and to protect the innocent from such terror.

We must never permit murderers to define our time or warp our sense of the normal.

This is not normal and each of you cadets graduating today are reinforcing our ranks, bringing fresh vigor, renewing our sense of urgency and enhancing the Army’s lethality needed to prove our enemies wrong. you will drive home a salient truth: that free men and women will volunteer to fight, ethically and fiercely, to defend our experiment that we call, simply, “America.”

You graduates, commissioned today, will carry the hopes of our country on your young shoulders.

You now join the ranks of an army at war. Volunteers all, we are so very proud of you, cadets, for taking the place you have earned in the unbroken line of patriots who have come before.

Your oath of office connects you to the line of soldiers stretching back to the founding of our country…and in the larger sense, it grows from ancient, even timeless roots, reflecting the tone and commitment of youth long ago who believed freedom is worth defending.

In terms of serving something larger than yourself, yours is the same oath that was taken by the young men of ancient Athens. They pledged to “fight for the ideals and sacred things of the city…to revere and obey the city’s laws and do [their] best to incite a like respect” in others, and to pass on their city-state as “far greater and more beautiful” than they had received it.

In that sense, it is fitting the cadet cover you wear today, for the last time, features the helmet of the greek goddess Athena, echoing respect of civic duty found in a democracy, and of a nation, in President Lincoln’s words, of the people, by the people, for the people.

After four years at West Point, you understand what it means to live up to an oath; you understand the commitment that comes with signing a blank check to the American people, payable with your life.

My fine young soldiers, a few miles northwest of Washington at Antietam battlefield cemetery is a statue of a Union soldier standing at rest, and overlooking his comrades’ graves. It is inscribed with the words, “not for themselves, but for their country.”

How simple that thought. so long as our nation breeds patriots like you, defenders who look past the hot political rhetoric of our day and rally to our flag, that Army tradition of serving our country will never die.

To a high and remarkable degree, the American people respect you. we in the Department of Defense recognize that there are a lot of passions running about in this country, as there ought to be in a vibrant republic.

But for those privileged to wear the cloth of our nation, to serve in the United States Army, you stand the ramparts, unapologetic, apolitical, defending our experiment in self-governance…you hold the line.

You hold the line…faithful to duty…confronting our nation’s foes with implacable will, knowing if there’s a hill to climb, waiting won’t make it smaller.

You hold the line…true to honor…living by a moral code regardless of who is watching, knowing that honor is what we give ourselves for a life of meaning.

You hold the line…loyal to country and Constitution, defending our fundamental freedoms, knowing from your challenging years here on the Hudson that loyalty only counts where there are a hundred reasons not to be.

Behind me, across Lusk Reservoir, stands a memorial dedicated to the American soldier. On it are inscribed the words: “the lives and destinies of valiant Americans are entrusted to your care and leadership.”

You have been sharpened through one of the finest educational opportunities in America, given to you by the American people via General Caslen’s superb faculty, who expect admirable leadership by example as soldier leaders.

My view of a great leader is the player-coach. We need coaches, men and women who know themselves, who take responsibility for themselves, coaching their soldiers to the top of their game.

Every soldier in your platoon will know your name the day you step in front of them.

Your responsibility is to know them. Learn their hopes and dreams. teach them the difference between a mistake and a lack of discipline. If your troops make mistakes, look in the mirror and figure out how to coach them better.

And while we never tolerate a lack of discipline, we must not create a zero-defect environment, because that would suffocate initiative and aggressiveness, the two attributes most vital to battlefield success.

In leading soldiers, you will have what F. Scott Fitzgerald called, “riotous excursions with privileged glimpses into the human heart.” So recognize you should never permit your passion for excellence to neutralize your compassion for the soldiers you serve, and who will follow you into harm’s way.

Remember that when the chips are down, it will be the spirits of your often rambunctious soldiers that will provide the reservoir of courage you will need to draw upon.

Rest assured that nothing you will face will be worse than Shiloh. Nothing can faze the U.S. Army when our soldiers believe in themselves.

The chips were down in the freezing cold days before Christmas, 1944, when the Nazi army was on the attack in the Ardennes.

A sergeant in a retreating tank spotted a fellow American digging a foxhole. The GI, Private First Class Martin, looked up and said to the sergeant in the tank, “are you looking for a safe place?”

“Well, buddy,” the private said with a drawl, “just pull your vehicle behind me…I’m the 82nd Airborne, and this is as far as the bastards are going.”

On the battlefield, no one wins on their own. Teams win battles, and if you can win the trust and affection of your soldiers, they will win all the battles for you.

If you wish to be a credit to our nation, you must carry West Point’s ethos everywhere you go and practice every day the integrity that builds your character.

When destiny taps you on the shoulder and thrusts you into a situation that’s tough beyond words…
…when you’re sick and you’ve been three days without sleep…
…when you’ve lost some of your beloved troops and the veneer of civilization wears thin, by having lived a disciplined life, you’ll be able to reach inside and find the strength your country is counting on.

You are privileged to be embarking on this journey. You will learn things about yourself that others will never know.

We can see the storm clouds gathering. Our enemies are watching. They are calculating and hoping America’s military will turn cynical. That we will lose our selfless spirit.

They hope our country no longer produces young people willing to shoulder the patriot’s burden, to willingly face danger and discomfort. By your commitment you will prove the enemy wrong.

We are not made of cotton candy.

You are a U.S. soldier, and you hold the line.

Your class will be remembered for an Army football team that took to the field of friendly strife and beat Navy… but you will also be remembered for the history you are about to write, and when you turn over your troops to their next commander, they will be as good or better than you received them.

I may not have had the pleasure of knowing each of you personally, but i have very high expectations of you…

Your country has very high expectations of you…

And we are confident you will not let us down because while we may not know you personally, we do know your character, West Point character.

So…fight for our ideals and sacred things …incite in others respect and love for our country and our fellow Americans…and leave this country greater and more beautiful than you inherited it, for that is the duty of every generation.

To the families here today, I can only say: apples don’t fall far from the tree. Thank you for the men and women you raised to become U.S. soldiers.

Thank you too, General Caslen and your team, who coached these members of the Long Gray Line. they will write the Army’s story, and in so doing will carry your spirits into our nation’s history.

For duty, for honor, for country…hold the line.

Congratulations, class of 2017, and may God bless America.