‘Throw A Frag Grenade’ Into Acquisition Or ‘Do No Harm:’ Navy Struggles With Innovation 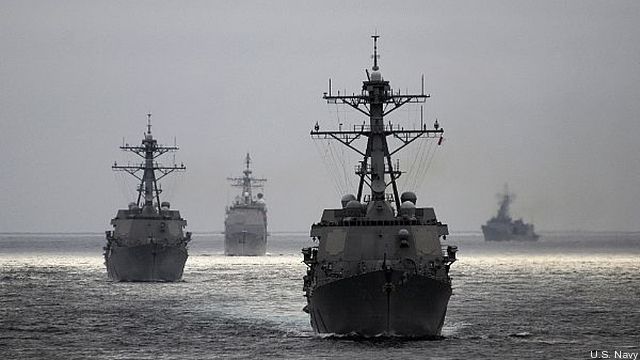 NATIONAL HARBOR: It’s easy to call for innovation. It’s hard to do. At this week’s Sea-Air-Space conference here, just 10 miles down the Potomac from the Pentagon, admirals and junior officers alike wrestled with the right balance between speed and safety, between it taking hours to 3-D print a new design and many months to certify it, between the dueling imperatives of Moore’s Law and “first do no harm.”

“There’s 85 percent that probably needs to be done the way we’re doing it; 15 percent that needs to move with that speed,” said Vice Adm. William Hilarides, chief of Naval Sea Systems Command (NAVSEA), after an audience member urged him to “throw a frag grenade” into the current procurement system. “We definitely need a system where innovation can play inside that.”

“First, do no harm,” agreed Vice Adm. David Dunaway, the chief of Naval Air Systems Command (NAVAIR). The service needs to open up the system for faster and more affordable “upgrade and modernization,” he said, but there’s a place for the full-up “Big A” acquisition process to handle big things like the F-35 Joint Strike Fighter — the most expensive conventional weapons program ever — or the Ford-class aircraft carrier.

Such sanguine statements are startling when you consider that the Pentagon’s procurement chief has called the F-35 a case of “acquisition malpractice“; the Senate has slammed cost overruns on the Ford; the heir-apparent to the chair of the House Armed Services Committee is helming an initiative for a comprehensive overhaul of “Big A” acquisition; and the head of a Pentagon-ordered study said the only cure for the current system was to “put a match to it.”

But the admirals are not just being hidebound. “The sea’s still pretty tough on ships,” Hilarides cautioned. “The parts that can move fast [are those] that are lower risk to human life.”

The first problem is that militaries always put human life at risk to some degree: It’s part of the job. The second problem is that technology — including that of our enemies’ — is advancing so fast in certain areas the normal systems can’t keep up, which creates its own risks. Especially in wartime, argued Lt. Ben Kohlmann, a fighter pilot now on the Chief of Naval Operations‘ hand-picked council of young innovators, “it’s almost better to have  a somewhat risky solution than no solution at all.” 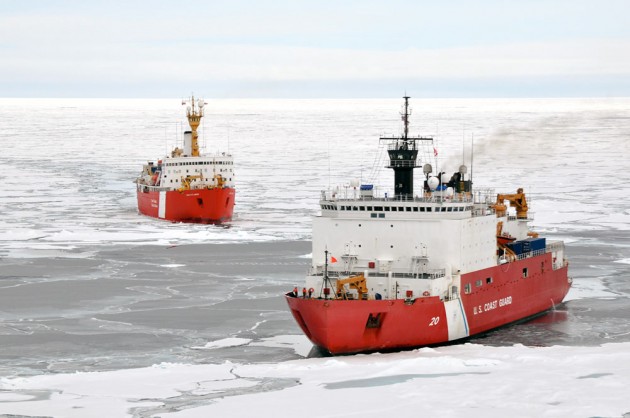 Nowhere is the innovation versus safety dilemma more acute than in 3-D printing, formally called “additive manufacturing.” (Traditional “subtractive” manufacturing cuts things down to fit; 3-D printing builds them up layer by layer).

That said, his CNO-chartered group has already helped place a 3-D printer on the amphibious assault ship USS Essex. “For the past three months they’ve been printing disposable medical supplies,” he said, as well as all sorts of odds and ends that the crew have come up with. If a sailor comes up with a new tool that would be useful in his work, he can just get it printed and try it out — then go back and print a better version based on what he’s learned, try out the new one, and repeat the process until he’s satisfied.

Wait a second, said the senior officer assigned to coordinate the Navy’s 3-D printing efforts, sitting down the table from Kohlmann and Weinert. “You see the wow factor, [but] you have to take a step back,” said Rear Adm. Paul Verrastro. “Safety has to be paramount.”

“There is a really tight certification and qualification process for any of the parts that we use on the ship,” the admiral told me later. The standards are naturally higher for parts whose failure could kill someone — a turbine fan, ammunition — but everything has to meet some kind of standard. However a piece of equipment is produced, he said, “it does have to go into each one of those processes.”

“The organizations that are really working on additive manufacturing now are professional organizations,” Verrastro added, pointing to Navy labs and warfare centers that have scientists, engineers, and administrators who are all familiar with the certification process because “they’ve lived it.”

Those organizations have used 3-D printing to cut the time required to build scale models for testing and custom parts for urgent repairs. And some of the time savings have been dramatic — from 51 weeks to eight weeks in one case, Verrastro said. His long-term vision, he told the conference panel, is an “approved database of design drawings that you can simply download” and then print out your part,  “knowing it can meet the specifications.”

That kind of virtual warehouse would be a huge help to supply officers around the world, especially on smaller or isolated ships, bases, and ground units where it’s cost-prohibitive and often physically impossible to bring along every spare part you might need. For example, said Coast Guard Rear. Adm. Mark Butt, as the Arctic opens to ever-increasing “icebreakers are at the very end of the supply chain — [but] when they need the part, they really need the part.”

A central repository, what Kohlman calls a “maker space,” could also serve as a clearinghouse for bottom-up ideas, with innovators from across the fleet uploading their best designs so others don’t have to reinvent them — and, perhaps, so a central certification authority can check them out to make sure they’ll work. 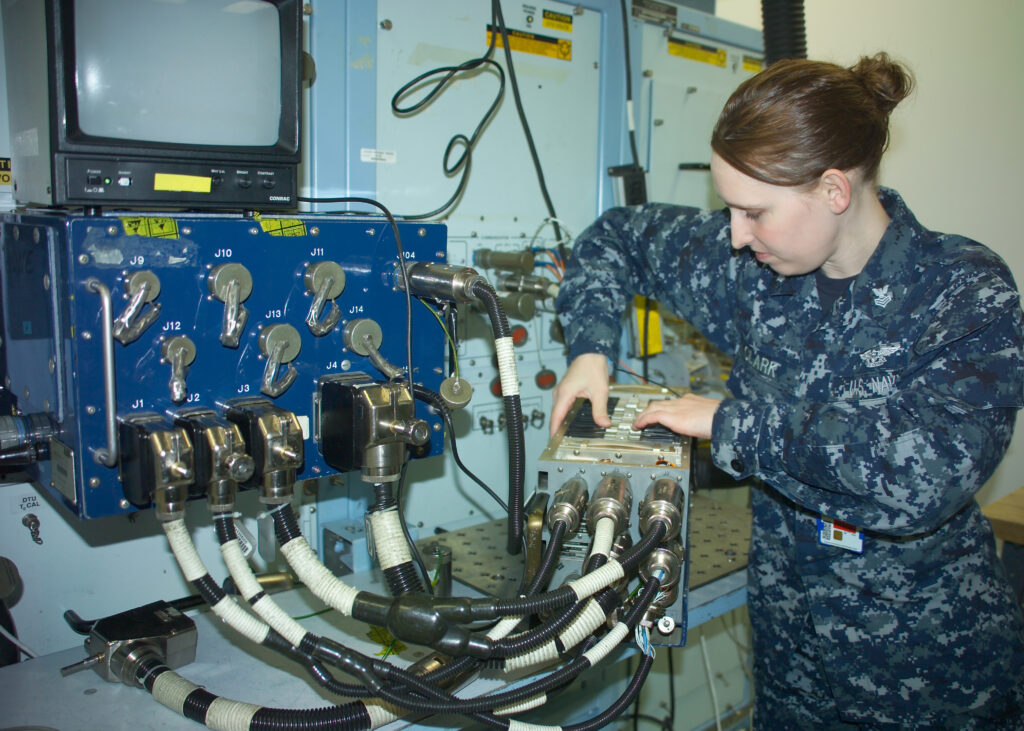 A Navy technician wrestles with an unwieldy mass of electronic cables.

Freedom Through Control: The Government As Lead Integrator

Ironically, opening the way to more bottom-up innovation may require more top-down control — at least according to several Navy leaders at this week’s conference.

Consider cyberspace. Better network security requires both imposing consistently high standards so there’s no weak link in the chain and rapidly updating the system to keep pace with the hackers, argued Mark Andress, the senior civilian working for the Chief of Naval Operations on “information dominance.”

“We need to take more control of our networks and computers [from] the thousand individual application owners across the Navy,” Andress said on the last day of the Sea-Air-Space conference. At the same time, he said, “we also need to be able to more rapidly insert technology…to keep pace with the threats.”

The solution to both, he argued, is “strong government technical authority.” Instead of letting the vendor for each particular contract come in and set up their own proprietary system, the Navy needs to “break apart” those enclaves and impose a common standard, one that not only raises security today but that allows any company, large or small, to offer a plug-and-play improvement in the future. (The term of art here is “open architecture”).

“We have to be able to break that system out of the proprietary stranglehold we’re under,” said Vice Adm. Dunaway, speaking at the previous day’s panel. “Open architecture and modularity is a real key that we’re not exploiting as we should.”

To create a common, easily upgraded architecture, Dunaway argued, the government has to “pull back” some of the authority it’s given companies on their particular contracts. “We look too frequently at the individual system,” he said, when, truly, “the weapon system is the carrier strike group, the weapon system is the air wing.”

So somebody has to make sure that all the individual piece parts from missiles to computers actually work together — and with the parts that haven’t been invented yet but which will need to have a place to plug into when it’s time to upgrade. “Somebody has to be the lead capability integrator,” Dunaway said. “It’s very difficult for an individual corporate entity to do that because of the proprietary boundaries. It is essential in my view that the government take some of these very important tech standards and tech authorities and pull them back into the government and control them.”

That may hurt some companies, he acknowledged. “It does impact revenue streams as money flows through the system and I want to be careful about that,” said Dunaway. “But some of this has got to change or we’re not going to be able to afford our future.”