Time For Congress To Rebalance On Asia-Pacific: Reps. Forbes & Hanabusa 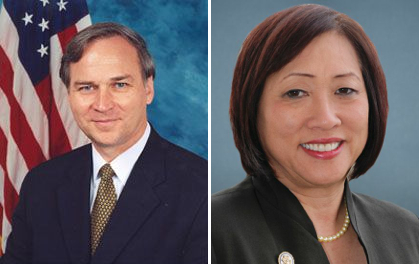 Rep. Randy Forbes can play the partisan as well as any of his GOP colleagues on the House Armed Services Committee, but he also makes a habit of reaching across the aisle to work with Democrats on select issues. As chairman of the House Armed Services seapower and projection forces subcommittee, Forbes has pressed colleagues on both sides of the aisle for much of this year to hold more hearings on the Pentagon’s Pacific pivot (or whatever term we’re using this month). In this op-ed, Rep. Colleen Hanabusa, a respected Democrat from Hawaii with a strong parochial and strategic interest in the topic, joins Forbes to press the call for more congressional focus on one of the fundamental strategic issues with which our country is grappling. The Editor.

We are pleased to announce the launch of a bipartisan House Armed Services Committee (HASC) oversight effort we are calling the HASC Asia-Pacific Oversight Series. For the last 12 years, the United States has worked alongside its allies and partners to sustain large-scale ground operations in Afghanistan and Iraq as part of the war against Al Qaeda and its associated forces.

While the committee will continue to conduct strong oversight of our nation’s efforts to degrade and destroy these terrorist networks, we believe the time has come for Congress to play a leading role in shifting our attention towards the long-range trends that stand to affect our security interests. Primary among these are the shifting security dynamics that have been occurring across the Asia-Pacific region. More specifically, we feel the rise of Chinese military modernization, and the geostrategic impact this trend stands to have on our friends, allies and trading partners throughout the region, calls for a thorough oversight effort by the House Armed Services Committee.

The Obama Administration acknowledged the need for our government to pay closer attention to the Asia-Pacific two years ago with its stated policy to begin to shift the nation’s attention to the region. However, we feel the Congress has been slow to conduct a ‘rebalance’ of its own. This series aims to stimulate such a process, not only because the Obama Administration has not fully supported its rhetoric with resources, but because we know this policy will only be successful with strong congressional input and support.

At its core, this series will seek to enhance an understanding of Asia-Pacific security issues for both members of Congress and the general public. To be successful, we will rely on government witnesses and some of the best independent thinkers across the country to increase our understanding of the military, economic, and political trends affecting the long-term security outlook in the region.

We will utilize full committee and subcommittee hearings, including engagement with other committees and classified briefings by officials from the Pentagon and Pacific Command. We will also conduct discussions with ambassadors from across the region to gain their shared perspectives. While we expect to devote rigorous oversight to these important questions in the years ahead, we plan to capture our bipartisan findings and share them at the formal conclusion of this series in February with the Independent Panel tasked with assessing the 2014 Quadrennial Defense Review. This will grant us the opportunity to catalogue what we have learned and to share our joint perspectives with the Independent Panel as it concludes its work on our future defense priorities.

In addition to education and oversight, we aim to use this series to play a leading role in encouraging the Obama Administration to build a multifaceted strategy for Asia-Pacific. For instance, we recently sent a letter to National Security Advisor Susan Rice urging her to conduct a formal, interagency strategy review for the Asia-Pacific. We believe an Asia-Pacific Strategy Review is required not only so that departments and agencies across the federal government can have the authority to think and act creatively within a robust interagency system, but also to communicate to Congress the breadth of resources that will be required to implement this strategy.

A forthcoming report from a bipartisan think tank, the Center for a New American Security, agrees with our assessment, concluding that “White House guidance is sorely needed to ensure that military and operational planning is appropriately in sync with diplomatic and political goals… The National Security Staff should prepare a formal strategy for the U.S. rebalancing to Asia, signed by the President, to provide a single official source on U.S. interests, strategy, and priorities in the region.” Unfortunately, the Obama Administration continues to reject such a proposal and has forced the rest of the federal government, as well as officials in Asian capitals, to try and parse policy from a disparate collection of speeches, interviews and articles. We welcome the opportunity to further build the case for an NSS strategy review for Asia-Pacific as our HASC series moves forward.

In closing, we want to make two items abundantly clear before we proceed with this effort. First, we acknowledge that Congress has an important role to play across the spectrum when it comes to policy in the Asia-Pacific, including trade policy, diplomatic outreach, alliance management, and sustaining our defense posture and engagement. But given our position as members of the House Armed Services Committee, we have chosen to focus on the balance of military power and questions related to maintaining stability in the region.

Second, this series is about understanding the broad security dynamics of the region — including everything from our alliances, to maritime disputes, to the impact of the China’s military modernization over the last 15 years — and how our government should look to best posture itself to respond in the years ahead. This is not about pushing any one perspective that China is an enemy or threat to the United States. To the contrary, we believe that while there are elements of the U.S.-China relationship that are competitive, there are also many opportunities for cooperation we should explore.

Amongst a tide of recent political turmoil, we are proud to be able to work together on this effort. Although it is often said, it is worth repeating here: U.S. policy towards Asia-Pacific remains a truly bipartisan effort. We look to extend this positive story as our Nation continues the task of building a durable diplomatic, economic, and security architecture across the Asia-Pacific region.