SURFACE NAVY ASSOCIATION: As the overstressed surface fleet struggles to rebuild its readiness for great power war, it’s adding a whole new type of training exercise called SWATT. Modeled on the Top Gun program for naval aviators — itself created to rebuild dogfighting skills after heavy losses in Vietnam — Surface Warfare Advanced Tactical Training involves mock sea battles of increasing complexity against other surface ships, submarines, and aircraft. It even includes instant replays to show skippers their mistakes, using temporarily installed data recorders on everything from weapons to sensors to how the crews stand watch. 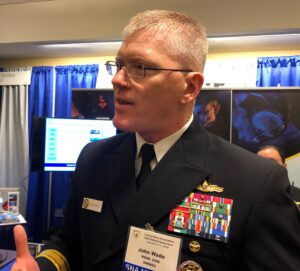 “We’re already finding that the payback on this is huge,” said Rear Adm. John Wade, director of the Naval Surface and Mine Warfighting Development Center (SWMDC), created less than three years ago and not yet fully operational. Feedback both from alumni, like the Nimitz and America battle groups, and from theater commanders overseas is “they were much better prepared” for both their final pre-deployment exercises and real-world deployments, Wade told reporters at the Surface Navy Association conference last week.

The Warfighting Development Center has also enhanced existing training exercises, for example when submarines practice mock attacks on surface warships. “Up until two years ago, surface ships were kind of just targets (in submarine training). They told you to go drive from Point A and Point B,” Wade said. “The submarines were just crushing us.” With SWMDC’s help, however, surface officers have gone into that training better prepared, he said, forcing the submariners to sharpen their own tactics. 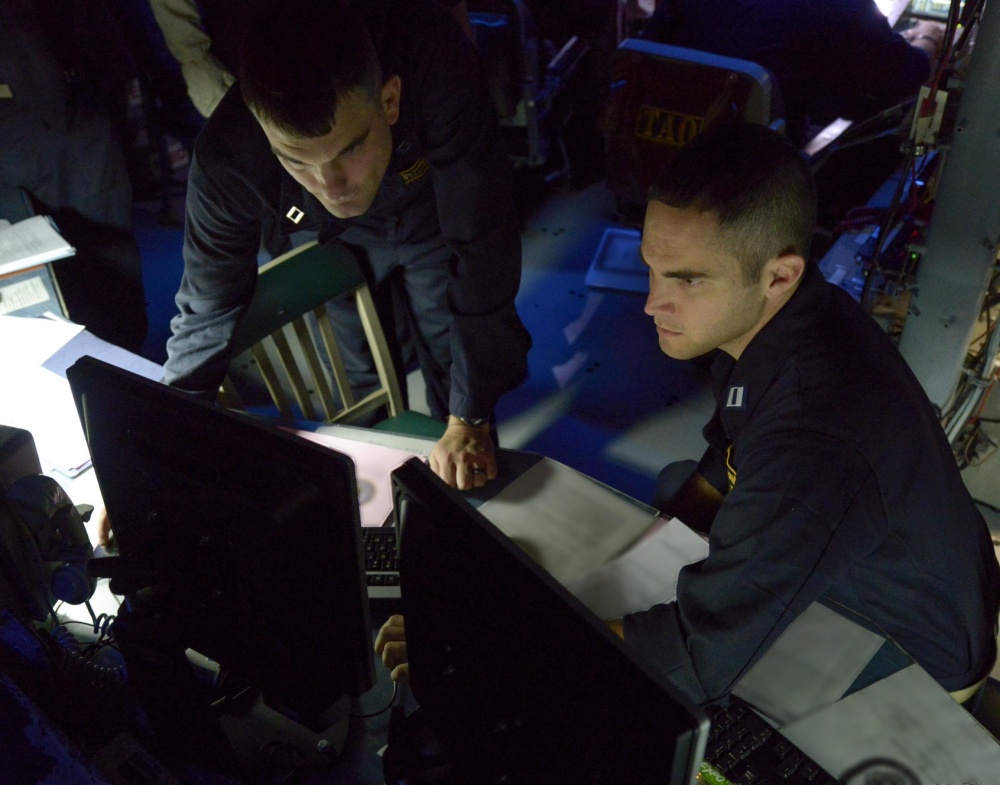 What SWATT Is (and Isn’t)

It’s important to note that SWMDC do not focus on the kinds of basic seamanship skills that were absent in this past summer’s at-sea collisions that killed 17 sailors. Those foundational skills are supposed to be covered in a warship’s “basic phase” train-up. What Surface Warfare Advanced Tactical Training does is add several extra weeks of intense training on how to fight the forces of a major nation-state, as opposed to bombing Islamic insurgents and chasing pirates, the primary enemies of the last 16 years. 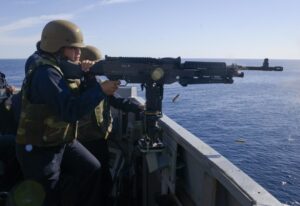 A sailor fires a machinegun during a SWATT exercise.

Specifically, SWATT comes after individual ships go through their basic phase training but before the whole strike group assembles for its final exercise before deployment, called COMPTUEX (Composite Training Unit Exercise). Now, when naval aviators finish their equivalent of the basic phase, they have long gone on to Fallon, Nevada — home of the famous TOPGUN school — to train first as a squadron and then as an entire wing. Only then do the fliers come together with the ships for that final Composite Unit Training Exercise. But the ship crews haven’t had any equivalent to Fallon — until now.

Unlike aircraft, of course, ships can’t fly cross-country to a special training area, so Wade sends the trainers out to them. His Surface and Mine Warfighting Development Center brings in top-performing junior officers from all over the surface navy and puts them through 13 to 19 weeks of intensive training, depending on their specialty:

There’s no minesweeper course yet, but there will once the Littoral Combat Ship’s Mine Counter-Measures (LCS MCM) module enters service.

The graduates are known as Warfare Tactics Instructors, WTIs, the same acronym as TOPGUN graduates. (That said, it’s a slightly different term: Fallon graduates “Weapons and Tactics Instructors”). The center has graduated about 150 WTIs of all three types since standing up, plus there are about 50 more WTIs who graduated from the pre-existing version of the air and missile defense course. 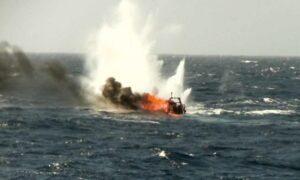 A high-speed target is destroyed by the USS Princeton during a SWATT exercise.

Warfare Tactics Instructors go back to regular naval units to act as in-house experts and help run SWATT. Typically, the WTIs will hold classes in port for five days. Then the ships deploy to sea for about two weeks of live exercises, starting with fairly basic scenarios — say, two ships vs. two — and building to include large numbers of surface vessels plus aircraft and either submarines (where available) or remotely-controlled underwater targets.

Instructors can adjust the program depending on what the crews involved do well and where they need help, and they provide detailed daily feedback.

“We’ve installed temporary data recording devices on our ships, (collecting) our sensor and weapons data and our performance data, actions of our watch standers, voice overlaid with the real truth,” Wade said. “What that allows us to is do the debriefs immediately,” just like at Fallon.

The data isn’t deleted when the training is over, though. Instead, after a SWATT exercise, the information collected is gone over by SMWDC instructors, other Navy training centers, and Navy modernization experts to see if future SWATTs, training in general, or even equipment need to be changed.

“We’ve created this process called the DAWG, Data Analysis Working Group,” Wade said. “We sit down with the WTIs, with the technical community, with the training enterprise, and we say, hey are there systemic issues?

“(Do) we need to modernize particular weapons systems? It helps gives us data to drive requirements for the future. Are there TTP (Tactics, Training, & Procedures) or training issues we need to get after and inject in follow-on SWATTs or at the schoolhouse?” Wade said. “We are just at the beginning here, but we have uncovered so many issues.”