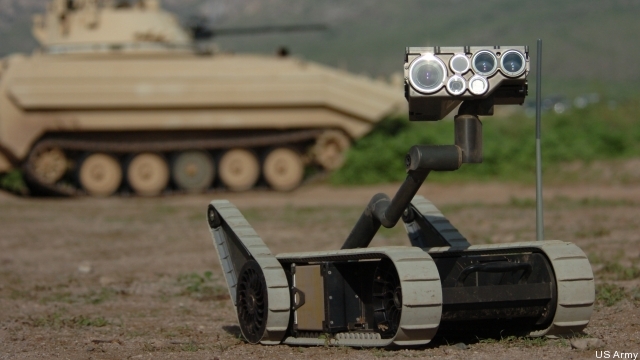 WASHINGTON: How much will it really cost to shut down the Army’s ill-fated Future Combat Systems program? Up to $1.5 billion, potentially three times the “special termination cost” reported by Inside Defense on Friday.

Three years after then-Secretary of Defense Robert Gates cancelled the sprawling FCS program — the Army’s ambitious attempt to build a brigade’s worth of high-tech equipment, from light tanks to drones to computer networks, under a single contract — the Army and industry are still thrashing out the final bill, with a final proposal from lead contractor Boeing not due until September 30th. (Things could be much worse: Dick Cheney’s disputed 1991 cancellation of the Navy’s A-12 stealth bomber ultimately reached the Supreme Court last year, two decades later). An Army Department report sent to Congress in May, first reported by our colleagues at Inside Defense on Friday, estimated “special termination costs” at $474 million, but that’s not the whole story.

“There are two different types of costs for termination,” one Congressional source explained to Breaking Defense. The previously reported $474 million in “special termination costs” covers, in essence, the penalties the government must pay to walk away from the contract, which are to some degree negotiable. But there’s a whole separate category, blandly called “Other Termination Costs” (OTC), which includes all the sad, mundane, and unavoidable details of shutting down a program: things like severance pay for employees working on the contract who were let go, the unexpired leases on the now-shuttered facilities where they once worked, bills for work done before the stop order came down, and the general administrative hassle of cleaning up and turning off the lights. All told, a separate Army document estimates these “other termination costs” at an additional $1 billion.

“So,” said the Hill source, “the total termination cost is actually about $1.5 billion. Ouch.”

That’s not entirely fair, an Army source told Breaking Defense. “The ‘special termination costs’ are for just that, termination,” but the term “other termination costs” is something of a misnomer, the source argued. Not all the “OTC” are actually costs caused by termination: They include bills for work done before the program was cancelled that simply hadn’t been processed and paid when the termination order came down. So, the spokesman concluded, “it’s not just for work associated with the termination,” strictly speaking.

Setting aside contract-law arcana, what is the bottom line? All sources consulted for this story agree that the total amount spent on the Future Combat Systems program is just under $20 billion. The only debate is how much of that figure is properly associated with the termination process itself as opposed to work done before the contract was cancelled. And what did the taxpayer get out of all of this expense?

“The taxpayer gets nothing out of it,” said Loren Thompson, a defense industry consultant and analyst who often writes for Breaking Defense, most recently on Army procurement problems. “Most of the things the Army has tried to spin off from FCS have gone nowhere.”

Of the eighteen vehicles and drones that FCS was developing, only one went into production, a little crawling robot — formally the “Small Unmanned Ground Vehicle” (SUGV), pictured above — that looks like the baby brother of Johnny 5 from the 1986 movie Short Circuit and which is intended to scout ahead of human troops for roadside bombs and other threats. (It’s made by Roomba manufacturer iRobot). But much of the SUGV’s technology was developed by DARPA outside the FCS program.

At least some of the technology that General Dynamics and BAE developed for the manned FCS vehicles — the light tank and its variants — is being salvaged for their work on the Army’s Ground Combat Vehicle (GCV), which will be much more technologically modest and much better armored. (Whether GCV itself survives is another question). And FCS spin-offs have appeared in unlikely places: A miniaturized radar developed by Raytheon to track incoming anti-tank missiles was repurposed for a shipboard anti-missile system called SeaRAM.

The single most complex and expensive element of the Future Combat System, though, wasn’t anything tangible, but rather the command-and-control network, which would have required about 100 million lines of computer code. In essence, the Army was trying to develop a military equivalent of Microsoft Windows operating system or Apple’s iOS, optimized to run programs for artillery fire direction, drone navigation, and the like instead of Microsoft Word. The Army took over the development of this “System of Systems Common Operating System” (SOSCOE) from Boeing when the contract was cancelled, but it was designed to run on cancelled FCS computers and is not compatible with anything else. So far, the Army’s surviving efforts to improve its networks use different operating systems that have more modest capabilities but which also actually work.

So while some technologies have spun off from the Future Combat Systems program, “it’s very hard to look back and say it was worth it,” summed up military analyst Andrew Krepinevich, president of the Center for Strategic and Budgetary Assessments. “The bottom line is a very expensive failure, a lot invested but very little harvested.”

At least, the Army appears to have learned from the Future Combat Systems fiasco: None of its current programs gives the prime contractor the latitude Boeing had on FCS, and none of them is anywhere near as overreaching in its technological ambitions. It’s just been an awfully expensive way to learn that lesson.