FORT MYER: As hundreds of troops stood at attention in the rain here this morning, Army Gen. Mark Milley formally became President Trump’s first pick as chairman of the Joint Chiefs of Staff.

“You’re my friend. You’re my advisor, and you deserve this position. I never had a doubt. Congratulations,” Trump declared to the new chairman. “Gen. Milley will serve as my top military advisor. I have absolute confidence that he will fulfill his duty with the same brilliance and fortitude he has shown throughout his long and very distinguished career.”

“You can rest assured that I will always provide you informed, candid, impartial military advice,” Milley had said a few minutes before.

But ay, there’s the rub. It’s hard work to be candid and impartial with any president, and Trump is more sensitive than most to perceived insult and personal loyalty. Milley promised the Senate in his confirmation hearing he would resign rather than obey an “illegal, unethical, or immoral” order and that he would “absolutely” not soft-pedal his advice.

“Arlington is full of our comrades, and we understand absolutely full well the hazards of our chosen profession,” Milley said then. “We are not going to be intimidated into making stupid decisions. We will give our best military advice, regardless of the consequences to ourselves.”

In his previous job as leader of the Army, Milley navigated the complex politics of the Pentagon and Capitol Hill with considerable agility. But he has a reputation for straight, tough talk, and the very Bostonian bluntness that probably appeals to Trump today could well aggravate the president in the future.

The most probable point of friction was evident even at this morning’s rain-soaked ceremony. Milley made a point of welcoming the foreign dignitaries attending and praised their commitment to “collective security” — not a popular concept in the Trump White House. Trump, by contrast, only mentioned foreign commitments indirectly, when he said the specialized advisor brigades Milley had created in the Army would “reduce the need for large deployments.”

That is one way the new units could be used, since they’re supposed to do a better job at advising Afghan and other allied forces than conventional units pressed ad hoc into the advisor role. But reducing the advisor mission overseas was not what Milley and other Army leaders cited when creating the Security Force Assistance Brigades: They talked about doing that mission better.

Vice President Pence spoke about America’s allies, but only to emphasize that Trump had cajoled them into making larger contributions to the common defense. (This is true, to a limited extent, with many NATO members increasing their promised spending, but this is, of course, in line with promises they had made under previous American administrations).

Defense Secretary Mark Esper — until recently Milley’s chief cheerleader as Secretary of the Army — split the difference. While he emphasized the allies’ greater contributions, he also praised how US forces are deployed “throughout the world… to protect our people and our interests.” Esper also praised outgoing chairman Dunford for how “he reoriented the joint force to prepare for this new era of great power competition that is now upon us”– that is, reorienting the military from counterinsurgency in Afghanistan to containing Russia and China, which was the key thrust of ousted Defense Secretary Jim Mattis’s National Defense Strategy. While President Trump has eagerly taken on China in economic matters, he’s been consistently reluctant to confront Russia on issues of security.

That said, Trump also took pains to praise Dunford, whom he inherited from Obama, and to emphasize their personal relationship. 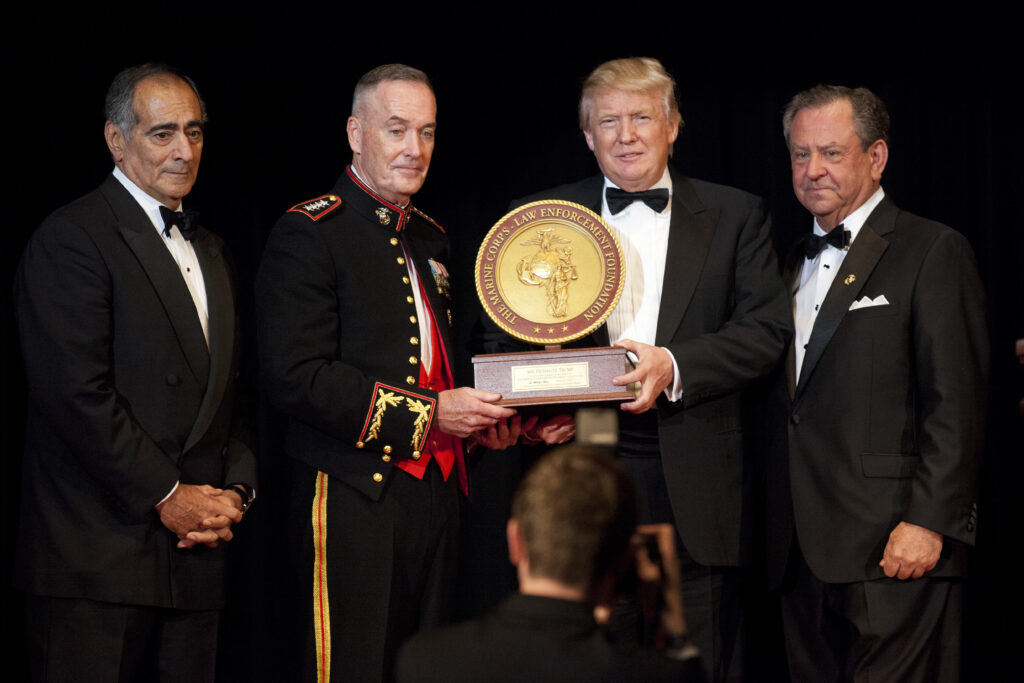 Back in 2015, when Dunford was still Commandant of the Marine Corps, he presented an award to Trump — not yet a candidate for anything — at a Marine Corps-Law Enforcement Foundation dinner. Trump said today that Dunford, at that dinner, was one of the first people he asked whether he should run for president.

In 2015, “I sat with Joe at a dinner, and believe it or not, I was getting a big award from the Marines, and Joe was presenting the awards, and I had not even thought of running for president,” Trump recounted today. “I was asking Joe lots of questions about the military. He said, ‘You really enjoy this, don’t you. I said, ‘I really love our country.'”

“I said… ‘should I give it a shot?’ This was before it was public. He was one of the first people I asked,” Trump went on. “I said, ‘what do you think? Do you think I’d have a shot? If I get it, we’re going to rebuild that military, it’s going to be stronger than ever before.’ And he helped me form an opinion, he gave me a lot of information, and he has ever since.”

Trump didn’t say whether Dunford said he should run or not. As a serving four-star general, however, Dunford would have probably and properly demurred to offer a political opinion. That’s the kind of delicate line Milley will have to walk as well.