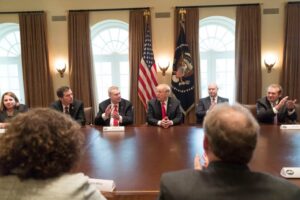 WASHINGTON: The pushback to President Donald Trump’s global steel and aluminum tariffs — announced Thursday —  has been swift and blunt. Republicans, Democrats, top defense officials, Trump advisors and trade groups have all made public their misgivings, saying the taxes could actually prove harmful to national security, and end up costing the Pentagon money.

But today, with the stroke of a pen, the trade wars have begun.

Foreign steel and aluminum imports to the U.S. are “not only an economic disaster, it’s a security disaster” that represents “an assault on our country,” Trump said during a speech in the White House, where he announced a 25 percent tariff on imports of steel, and 10 percent on aluminum Thursday afternoon.

You’d think the American defense industry — which uses virtually no steel or aluminum imported from foreign countries, and consumes only 3 percent of the steel and aluminum produced in the United States — would support the president if this is a “security disaster.”

On the face of it, the American defense industry would seemingly see little impact. But the second-order effects are worrying, and the reaction from allies and partners could be harsh. 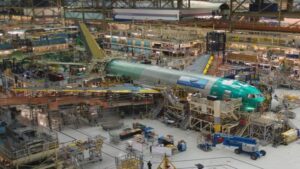 In particular, Canada and Mexico are exempt from the tariffs for the moment, Trump said, but warned both countries that “if we don’t make the deal on NAFTA” things may change. Canada is, of course, a legal part of the American defense industrial base, so the two countries share remarkably close security ties.

So long as those two countries are exempt, the impact on U.S. aerospace and defense companies will likely be minor, said Loren Thompson, an industry analyst who advises defense firms. But if Canada loses that pass, it would become “a significant cost burden for Boeing and other domestic companies,” Thompson said. “Defense companies are expected to buy American, but several of Boeing’s defense programs involve militarized versions of commercial transports that contain extensive aluminum content.”

Trump also threatened other American allies. In particular he took another implicit shot at NATO alliance members who he has criticized for not funding their militaries to the level the alliance’s charter calls for. “We’re going to see who’s treating us fairly and who’s not treating us fairly — who’s paying the bills and who’s not paying the bills,” Trump said. “That will enter the equation also.”

Overall, “the direct effect on the Defense Department is real but not large,” said Andrew Hunter, a former Pentagon acquisition official now at the Center for Strategic and International Studies. While Hunter doesn’t see a major crisis brewing in the short-term, he is concerned about knock-on effects.

Domestic producers, now free from overseas competition, will have the room to raise prices for both commercial and government customers, Hunter said, which would impact defense manufacturers and the DoD. And allies hit by the tariffs will likely demand exemptions in order to stick with U.S.-produced defense equipment, or insist that some production is moved to their own countries — which may impact jobs at American plants.

“That loss of foreign sales could also raise overhead costs on the DoD because by building fewer systems, the unit costs invariably goes up,” he said.

In a letter to the Commerce Department, Defense Secretary James Mattis objected to the tariffs as the administration has laid them out, writing that the Pentagon is “concerned about the negative impact on our key allies” under the plan. He also made the losing argument that if the steel tariff were signed, “DoD recommends waiting before taking further steps on aluminum.” 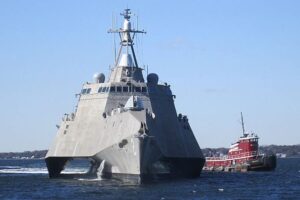 The Littoral Combat Ship trimarans are built largely of aluminum

A Pentagon spokesman pointed to the Mattis letter and declined to comment further.

A group of seven Senate Republicans are also opposed the move, telling President Trump in a letter released Thursday that the sanctions would endanger national security and strain relations with allies. The group is led by Joni Ernst, a Republican who chairs the Senate Armed Services emerging threats subcommittee. They join Republican congressional leaders like House Speaker Paul Ryan and Senate Majority Leader Mitch McConnell in urging Trump to reconsider.

Slapping allies with a global sanctions regime, they said, “risks alienating key international partners that contribute to our ability to defend our nation and maintain international stability.” Taking a page form Mattis’ missive, the letter continues, “in lieu of imposing broad, global aluminum and steel tariffs that could adversely impact our relationships with several key allies, we ask that the administration consider alternative approaches to address these issues.”

Yet another letter from Eric Fanning, president of the powerful Aerospace Industries Association trade group — also released Thursday — warned that if the policy is implemented, “there is a risk of trade retaliation on aerospace and defense products, which are the consistent source of America’s largest manufacturing trade surplus.” That surplus hit $86 billion in 2017.