Turkey Is Cozying Up To China After F-35 Expulsion, Israelis Warn 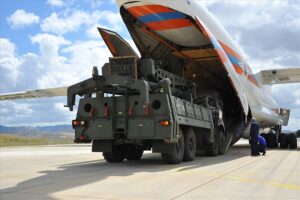 TEL AVIV: The expulsion of Turkey from the F-35 program could lead to closer relations for the NATO ally with China, a move likely to have far-reaching implications in the Middle East, Israeli national security experts say.

There is no doubt that Turkish President Recep Tayyip Erdogan will now strengthen relations with China, says Uzi Rabi, director of the Moshe Dayan Center for Middle Eastern and African Studies here. “He knows that the Chinese have a very multi-targeted policy. They attach military help with economic interests, and Turkey will have to consider it and accept it.” Closer ties between Turkey and China will harm Washington’s work in its trade war with China, he said. In July, Erdogan visited China and declared that he is a great supporter of China’s so-called Belt and Road Initiative.

According to Oded Eran and Galia Lindenstrauss, two senior researchers in the Israeli Institute for National Security Studies (INSS), Turkey’s ties with China have warmed. On July 2, President Xi Jinping hosted Erdogan in Beijing, one day after Erdogan presented a gift to his host: an op-ed in the Chinese mouthpiece “Global Times.” Erdogan shares the Chinese strategic line of thinking, centered on a need to change the world order from unipolar to multipolar.

The researchers say that without explicitly mentioning the United States, Erdogan challenged the Western powers and spoke of Turkey’s interest in cooperating with China on defense matters. The words “strategic cooperation” appeared repeatedly in a report about the July 2 meeting between the two leaders on the Chinese President’s official website.

The INSS researchers say that this rhetoric indicates a growing drive by both countries to advance their interests through the prisms of two similar strategic visions: through the Belt and Road Initiative, China aspires to promote its vision of sea and land routes to Europe, while Turkey seeks to promote what it calls the Middle Corridor.

Furthermore, during the Beijing visit Erdogan was clearly willing to pay the political price demanded by China. According to an official Chinese report on the Xi-Erdogan meeting, the Turkish side stressed that it would not allow any anti-Chinese separatist activity to operate from Turkey, and the Turkish side voiced appreciation for Chinese counter-terrorism efforts.

The INSS experts say that Erdogan sees an opportunity for Turkey in the rivalry between China and the United States, especially if can manage to insert itself as a key factor in China’s strategic approach. From an ideological standpoint, Erdogan positions his country and China among countries that have not gained the recognition and status that they feel they deserve in the current world order — overseen by its obvious (though not explicitly named) gatekeepers the United States and Europe.

For example, in a recent visit to China, Erdogan suggested that Turkey will join the Shanghai Cooperation Organization, a regional security body composed of China, Russia and four Central Asian nations. 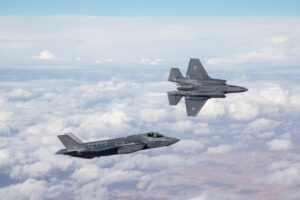 Meanwhile, Israel is hopeful it may get some of the F-35 business that’s been stripped from Turkey as a result of Ankara’s decision to buy the Russian S-400 SAMs.

Turkish industry was supposed to manufacture many parts of the F-35 and buy 100 of the planes. Eight Turkish companies were contracted to supply parts to the program.

Israel, which has signed a contract for 50 F-35s and is considering buying another 25, already has 10 companies supplying assemblies and electrical parts to the F-35 program. The major supplier is Israel Aerospace Industries (IAI) that operates a production line for F-35 wings.

Israeli sources told Breaking Defense that the vast operational experience of the Israeli Air Force (IAF) and the capabilities of the local defense industries may work in their favor.

Meanwhile, Israeli sources told Breaking Defense that there is no doubt that China will try to get as much data about the F-35 by contacting the Turkish companies that were supposed to manufacture parts and assemblies for the Joint Strike Fighter. “The Chinese are champions in that field. They try to get technologies from any available source,” one source says.

The sources pointed to the Lavi Israeli fighter aircraft project that was terminated because of American pressure in 1987. Three prototypes of the advanced fighter aircraft were already performing test flights when the project was killed. A few years later, according to foreign sources, a Chinese fighter aircraft, the J-10 was revealed that “very much resembled the Israeli aircraft”.

Israel has never confirmed or denied the reports in spite of the fact that at that time the relations between Jerusalem and Beijing were excellent.

Israeli experts say there is one hurdle between China and Turkey — they have totally different views about Syria. Turkey has backed the opposition to President Bashar al-Assad while China has supported the regime and Russia’s military intervention there.

“As the war in Syria is in its final stages, I think that this will not be a hurdle to the warming relations,” one Israeli source said.

Another factor cited by the INSS paper as raising the specter of closer Turkish ties with China is the weakening Turkish economy. China-Turkey bilateral trade reached $23 billion in 2018, according to the Turkish Statistics Office, making China Turkey’s third largest trading partner. The trade relationship is marked by a massive $18 billion imbalance in China’s favor, something that Turkey is seeking to address by expanding exports and attracting Chinese investment at a time its economy is struggling.

At the peak of the brief period of good relations between Turkey and China, Turkey negotiated the $3 billion purchase of the Chinese-made FD-2000 surface- air missile system in 2012. The system, built by China Precision Machinery Import and Export Corp, was to be bought after Turkey rejected rival offers from Russian, US and European firms.

The U.S objected vigorously and successfully to that purchase. Not this time.