Washington: America does not need a stealthy long-range bomber able to penetrate deep into remote, well-defended places, America’s No 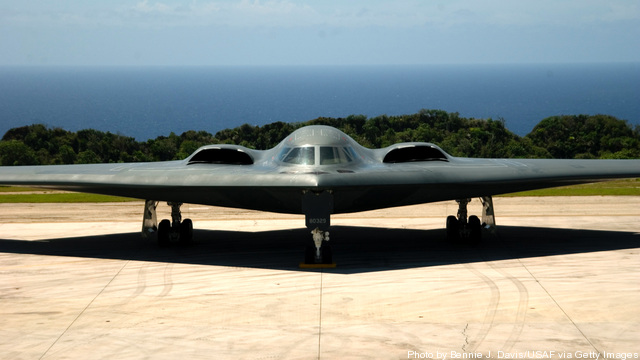 Cartwright, outgoing vice chairman of the Joint Chiefs, also confirmed that the Pentagon is considering — as part of its budget deliberations — scrapping its next aircraft carrier, the first official confirmation by a senior military official. Cartwright spoke with reporters at a Defense Writers Group breakfast here.

While he didn’t confirm that the Pentagon has received new White House guidance to make deeper cuts than the $400 billion already mandated by President Obama, Cartwright did hint that larger cuts — rumors put the number anywhere between $500 billion and $600 billion over the next decade — are likely.

Cartwright, who was vilified in the press by anonymous administration and Pentagon sources when he became the clear White House favorite to become chairman and then lost out to Army Gen. Martin Dempsey, is known on Capitol Hill and the defense industry as one of the military’s most original thinkers. He made clear this morning that he was not in line with former Defense Secretary Robert Gates’ thinking on several major military matters.

Gates has said the country needs a next-generation stealthy bomber to penetrate deep into remote areas — such as western China — and added money into the most recent budget to jump-start its development. “I’m known as a bomber hater,” a smiling Cartwright said this morning when I asked him whether the country needed such a plane. The general’s main worry is that we will build an “exquisite” aircraft, loaded with the latest stealth, able to fly huge distances and crammed with expensive sensors and end up being able to buy only a few of them. He noted the progression of bomber production numbers: 100s of the venerable B-52; 65 B-1s; and 20 B-2s.

“Building five or 10 of something isn’t going to do something for us,” he said, adding that he wants to think of an aircraft of which we could build “hundreds.”

He also dismissed the need for a manned bomber. Air Force advocates have argued that a new bomber must be manned because the aircraft would carry nuclear weapons and they want to have a man in the loop who can decide to turn around and not drop weapons if it comes to that. Cartwright wryly noted that he didn’t remember any manned version of intercontinental ballistic missiles (ICBMs).

“The logic that the the next generation bomber should be unmanned is unassailable,” said John Pike of GlobalSecurity.org. He said even manned bombers would not be recalled once deployed with nuclear weapons. “Once the festivities start, it just becomes too complicated.”

On a strategic level Cartwright made it clear that the U.S must reshape it basic approach to deterring both countries and non-state actors like Al Qaeda and Hezbollah. He said the U.S. must consider a more flexible approach, perhaps MAD (Mutual Assured Destruction) for one country and a different approach for others. He advocated a “whole of government approach, not just kinetics,” a clear reference to using diplomatic pressure, offers of aid and the threat of the use of conventional forces to achieve U.S. goals.

For those wonder what the general plans to do when he retires, his answer was classic: “Take a nap.”