US and UK To Work Together on Carrier Design, Deployments 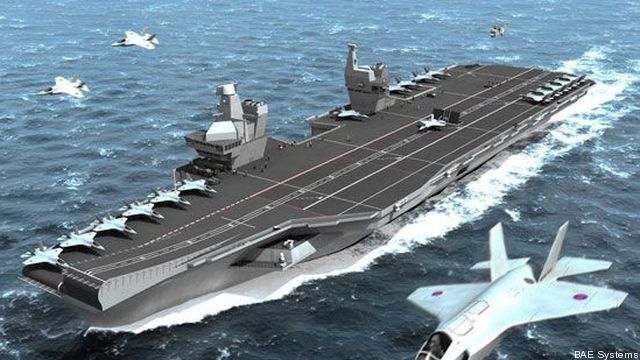 CORRECTED. We reported that Andrew Krepinevich serves on the Defense Policy Board, which provides advice to the Defense Secretary. He did, but left the board in October.

PENTAGON: Sometimes politico-diplomatic announcements are just plain hard to decipher, even when you know they convey significant news.

That may be the case with this nugget sent out yesterday evening by Pentagon spokesman George Little:

Finally, Secretaries Panetta and Hammond signed a Statement of Intent on Carrier Cooperation and Maritime Power Projection that will serve as the framework for increased cooperation and interoperability on the use of aircraft carriers, as well as provide the basis for the U.S. to assist the UK Royal Navy in developing its next generation of aircraft carriers. This cooperation is a cutting-edge example of close allies working together in a time of fiscal austerity to deliver a capability needed to maintain our global military edge.

Clearly, this marks a significant commitment by both countries. Carriers are the stuff of dreams for those wishing to deploy their presence in force far from home and are almost as important as space flight to national prestige. The fact that the US would agree to help Britain develop its next two carriers is worthy of note. Add to that the language about “Increased cooperation and interoperability” and you may have a major event.

We talked to some of the experts to see how much perspective we could offer you, dear readers. Andrew Krepinevich, who heads the respected Center for Strategic and Budgetary Assessments, offered a bit, but not much.

“Not sure on this one. Based on what you’ve given me this may be a case of where the British are looking for help from our industrial base. This wouldn’t be the first time. In the late 90s when they were trying to build a new class of submarines (the Astute Class), they realized they lacked the ability to do so, and came to us for help,” Krepinevich wrote in an email. “They may have lost some key sectors of their shipbuilding base when it comes to carriers as well.”

“The UK MoD is struggling big time under a substantially reduced defense budget with no relief in sight. The MoD was forced by budget considerations to mothball many of its ships and change direction with regard to its program to build two aircraft carriers. Under the current plan, the UK will not have an operating carrier for several years (I don’t remember the details). I understand the second carrier will be the only one that is fully operational with the first more in a trial configuration,” he wrote.

The new agreement “came as a surprise to me, especially in light of the relatively long-standing UK-France carrier cooperation. But I can see the new cooperation as a vehicle for the US to share some of its carrier design and operation know how with the UK. And assistance in any form can only be helpful to the UK,” he noted.

Our latest cost estimate for the Queen Elizabeth Class Aircraft carrier program is £5.2 billion. This figure is based on the current configuration of the carriers and does not include the additional costs of installing catapults and arrestor gear to enable it to operate the more capable carrier variant of the Joint Strike Fighter decision which will be taken next year. The costs of conversion are under investigation, but are currently estimated to be in the order of £1 billion. As part of a package of measures taken in the strategic defense and security review, we have reduced overall spending on the Carrier Strike Program by £4.4 billion over the next 10 years.

For a shrinking British military, so hungry for savings it is slicing significantly into the number of people who serve in its Army, the prospects of coming up with an additional £1 billion is remote, to say the least.

Meanwhile, it bears remembering that the UK and France cooperate to some degree on their own carrier forces. Does this mean we have the beginnings of a min-NATO carrier group? It’s awfully hard to tell. The challenges of working out who would have priority to decide whose carrier goes where and when and why might be too great to overcome.

Cevasco says that the UK “understands the challenge associated with working cooperation in parallel with both the US and France. Some of what the US provides can certainly be shared with the UK and France, but I suspect some of what the US shares with the UK will be shared subject to the understanding it not be transferred further. The UK has operated in that dual mode for decades–separating its transatlantic cooperation and its intra-Europe cooperation.”

In terms of industrial cooperation, Cevasco thinks that UK-French cooperation and US-UK cooperation “will simply make it easier for the UK and France to support their domestic carrier programs. The US might also learn something from British and French shipbuilders — I recall a multi-nation ship design cooperation during the 1980s; the US Navy and the others exchanged information about their national design practices and all benefited.”

This story will surely grow as we learn more.