US-China To Set Up Video Hotline, Talk Of Joint Exercises 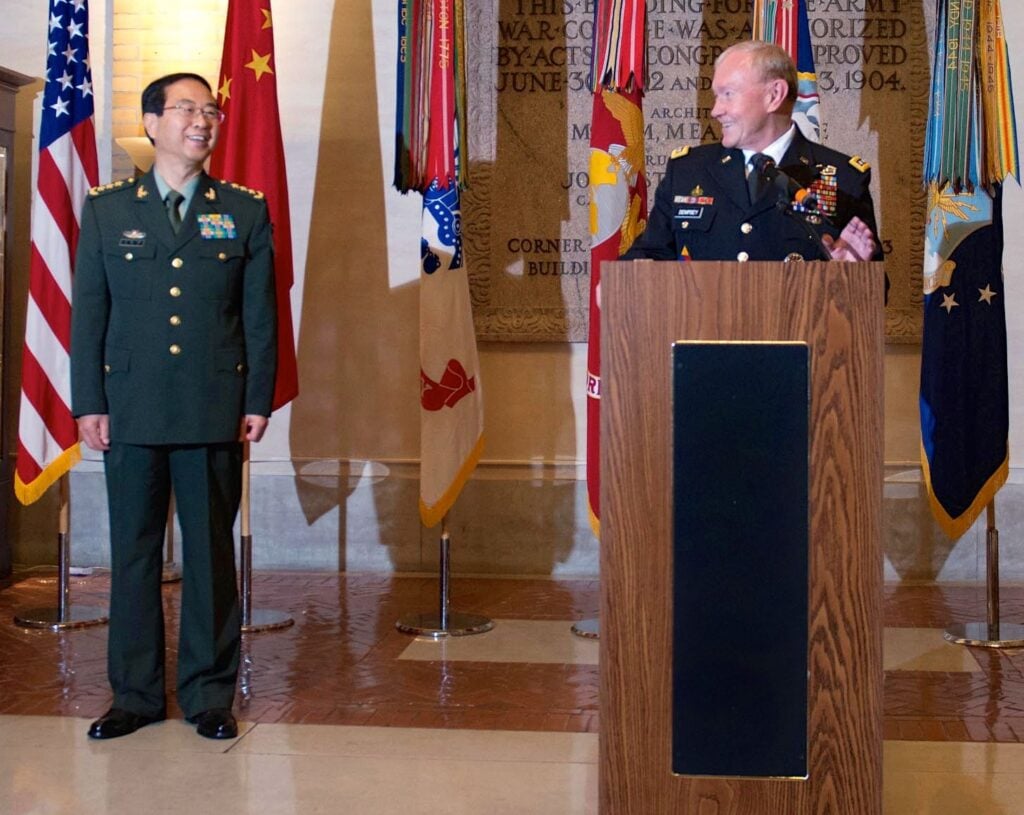 PENTAGON: Interspersed with strong declarations by Gen. Fang Fenghui,  head of the People’s Liberation Army’s general staff, that China is right in all of its territorial disputes in the East and South China Seas, there were clear indications that the United States and China are grappling with how to craft a more stable and more intimate set of military to military relationships.

Much of the rhetoric from Gen. Fang sounded pretty uncompromising. On the subject of the Haiyang Shiyou 981 oil platform off the coast of Vietnam, he made clear China would drill for oil no matter what Vietnam thinks. The rig is within the 12-mile limit of Chinese territorial waters so China has every right to drill there, he said. Vietnamese rioters destroyed what they thought were Chinese factories yesterday after protests against China’s actions spin out of control. “We believe the ones provoking those issues are not China,” he said in an opening statement, standing next to Gen. Martin Demspey, chairman of the Joint Chiefs of Staff.

Vietnam lays claim to a routine 200-mile special economic zone (recognized in the Law of the Sea convention) which places the rig about 70 miles inside its waters. China’s claims, backed up by almost 80 ships, have little basis in international law. Instead, China invented something called the Nine Dash Line, which it places throughout the South China Sea and thus lays claim to the Senkaku Islands and most of the Spratley Islands. This places China at odds with Japan, a close American treaty ally, and the Philippines, also a treaty ally.

Dempsey made it clear the two countries did not see eye to eye on the South and East China Sea disputes. “We also discussed tensions in the South China Sea and how provocative actions can lead to confrontation. These issues need to resolved through dialogue and international law,” he said in his opening statement. “We had a refreshingly frank and open discussion our mutual concerns and differing opinions about the East China Sea.”

“Frank and open” in diplomatic speak means they may have raised their voices and gotten quite direct, but no one screamed or punched anyone. The two commanders held a one-on-one meeting separate from the fully staffed meetings. (To get some idea how big a deal this visit is, there were about 20 Chinese staff officers seated on the side of the Pentagon briefing room, including at least three generals I could see.)

But there were clear signs that the military-to-military relationship between the two great powers is maturing and deepening. Gen. Fang said he and Dempsey “agreed on many issues” and ticked them off. They will explore creating “mutual notification of major military activities” and how to craft “standards of behavior” for air and sea forces. They will also strengthen “strategic dialogue between the two strategic planning departments” and “continue advancing” army to army to dialogue. China and the US also agreed to set up a secure video teleconferencing service — sort of a modern version of the old Cold War hotline — so the military leaders could speak face to face and help avoid “miscalculation.”

Perhaps most interesting in the long term was mention by the Chinese chief of staff about holding joint exercises with the United States in “a third country.” No details were presented, but taken with China’s participation this year in RimPac, the world’s largest naval exercise, this would mark an important commitment by both militaries to building a regular working relationship.

The two nations are already ramping up joint exercises for humanitarian assistance and disaster relief (HADR). This year, for example, 40 PLA personnel visited Hawaii for a “Disaster Management Exchange” to share techniques and improve interoperability between the two nations, and China will host a US delegation next year. In 2015, China will also host the annual “Phoenix Spirit” HADR exercises, which started in 2013 and involve Australia and New Zealand as well as the US and China. The two navies have also institutionalized counter-piracy cooperation off the Somali coast in the Gulf of Aden.

I was struck by Gen. Fang’s mention that he met with the relatives of Lt. Gen. Claire Lee Chennault, commander of the famous Flying Tigers who fought Japan before and during World War II, and of Gen. “Vinegar” Joe Stilwell, who commanded forces in the Burma-India-China theater. In a clear diplomatic statement, he said, “We will remember the contribution they have made to Chinese-American friendship.”

Building on that will be the challenging part.