US Forces Won’t Grow Much Despite Hill & Trump Rhetoric 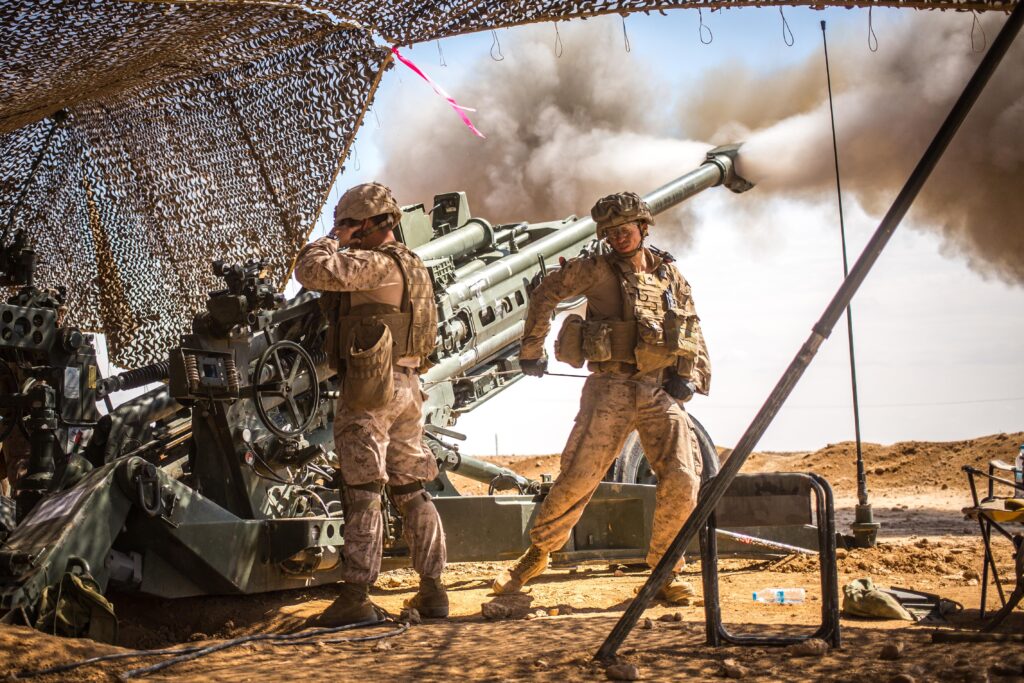 The defense community is abuzz with talk of strategy and force expansion as the Pentagon develops the Trump Administration’s National Security Strategy. Talk is nice but, as budgeteers like to say, “If it ain’t funded, it ain’t”.

Building the forces the services say they need—with the readiness and modernization to support them— requires large budgets, such as those proposed by Sen. John McCain. Defense Secretary Mattis and General Joe Dunford have identified 5 percent budget growth per year as the required level. But political gridlock, the enduring drag of the Budget Control Act, and the history of budget compromises will conspire to prevent DOD from getting that much. The Pentagon will need to make some tough trade-offs. A recent CSIS study showed what these tradeoffs look like, and it’s going to disappoint a lot of people.

First let’s consider the future of defense spending. As budget watchers have noted, the future is highly uncertain. The chart below shows the wide range of projection and proposals. 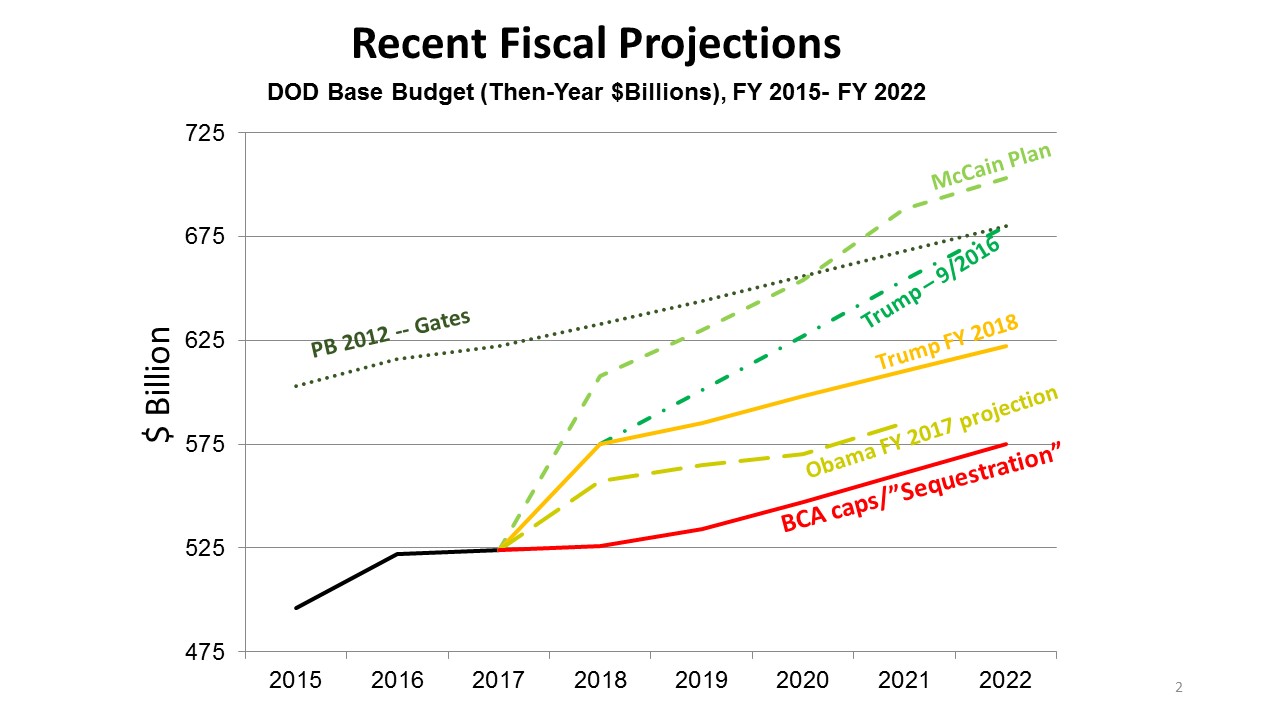 The solid black line is the enacted budget level.  The other lines are different budget projections.

“Gates 2012” is the budget projection before the cuts imposed by the Budget Control Act of 2011. Then-Secretary Gates regarded it as the minimum required to execute the strategy, and defense hawks often refer to it as a goal.

“McCain plan” reflects the build up that the chairman of the Senate Armed Services Committee proposed in January 2017 and which is embodied in the Senate’s National Defense Authorization Act. 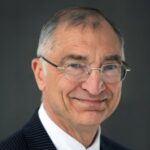 “Trump 9/2016” is the fiscal level implied by the president’s September 2016 speech in which, as a candidate, he proposed a greatly expanded force structure.

“Trump +$18B” is the Trump administration’s projection in the fiscal 2018 budget, an $18 billion increase over what the Obama administration had projected. (This was described as a $54 billion increase, but that used the Budget Control Act level as a baseline.) The Defense Department was emphatic that this projection was a “non-policy” profile that would be changed as a result of the administration’s strategic reviews. In theory it could go higher. However, it represents budget “facts on the ground”, and the department must appeal to OMB for more resources. (Note: Cancian used to be the OMB person who said no to the Pentagon.)

“BCA caps” (also known as sequestration) were established by the Budget Control Act of 2011. Successive budget compromises have modified the caps, but their continued existence puts a damper on any defense buildup. 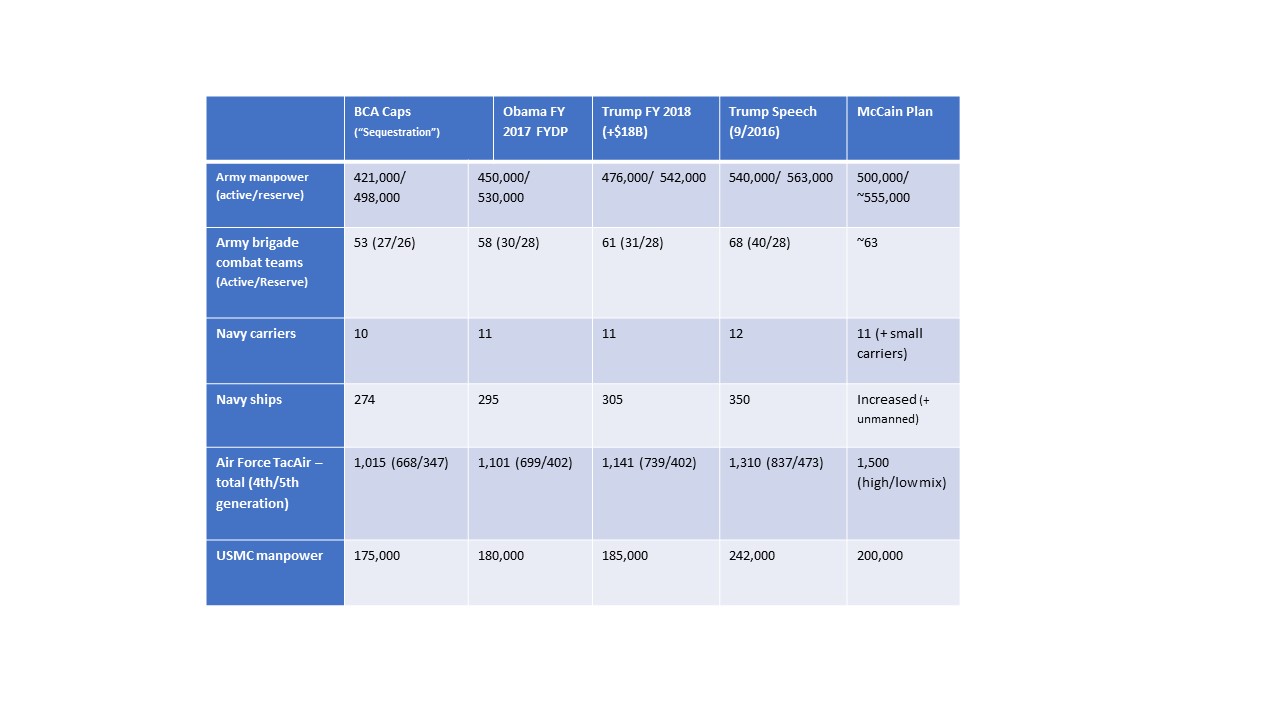 What do these different budget levels mean for force levels? The table below links forces to budget levels, using the CSIS Force Cost Calculator where the original source did not specify forces.

What becomes clear is the profound affect that budgets have on forces and hence on strategy.

The table generally represents a balanced approach to funding forces, readiness, and modernization without leaning strongly one way or the other. However, strategies can lean towards capacity, that is forces and readiness for on-going operations and day-to-day crises, or capability, that is, modernization for high end fights.

Defense Secretary Mattis appears to be leaning towards buying capability to face the challenge of high-end competitors like Russia and China. That would trade force expansion for modernization programs. Former Deputy Secretary Bob Work recently acknowledged the need for such a tradeoff and explicitly called for such a tradeoff. The difference between the structure of “Trump 9/2016” and “McCain plan”, which cost about the same, gives a sense of that trade-off. Robust modernization in the McCain plan limits force expansion.

The service chiefs and most experts recommend enhancing readiness. Indeed, Mattis noted how much readiness had deteriorated when he returned to the Pentagon and so focused the 2017 and 2018 budgets on readiness. However, readiness is extremely expensive and buying it necessitates trade-offs with forces, modernization or some other element of the budget like compensation or quality-of-life. Calculations using the CSIS Force Cost Calculator show that building a high readiness force at the Trump administration’s FY 2018 budget projection would require freezing the forces at about the Obama 2014 QDR level, for example, the regular Army at 450,000 and the Navy at 282 ships (long term).

So which budget will we get? As my colleague Todd Harrison notes, large growth can only be obtained through some government-wide budget agreement that changes or eliminates the Budget Control Act (BCA). Despite much rhetoric, that has been elusive. Other budget experts, Mackenzie Eaglen and Katherine Blakely, express similar skepticism. The recent budget resolution is even more gloomy, putting defense spending at BCA levels in order to make room for tax cuts. Additional forces could be supported temporarily through Overseas Contingency Operations funding (war funding known as “OCO”), but that would not be a long-term solution and might not be acceptable to deficit hawks or domestic program advocates in the Congress. The likely outcome: despite the administration’s rhetoric, the force levels that emerge will disappoint a lot of people.

Mark Cancian, a member of the Breaking Defense Board of Contributors and a former senior official at the Office of Management and Budget, is a defense expert at the Center for Strategic and International Studies.