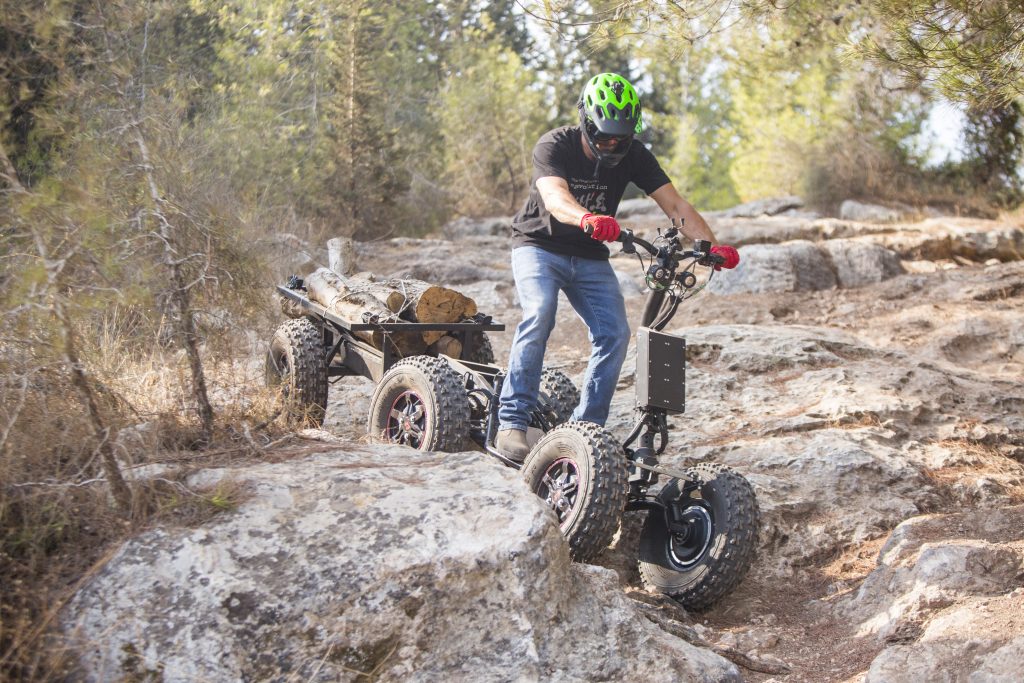 TEL AVIV: The CH-53 landed in complete dark 10 miles from the target, a terrorist stronghold somewhere in the Middle East.

The back ramp was down in two minutes: 15 U.S special forces commandos with their gear and accessories for the planned operation headed out on their way to the target. An hour and 20 minutes later the commandos could see the enemy sentries through their night vision systems. They hadn’t done double time to the target. They crossed the 10 miles from the landing site riding on new, unique vehicles.

They didn’t make any sounds to alert the enemy and the commandos attacked with complete surprise. Satellite imagery helped them plan a GPS-based route that took the four-wheeled vehicles along the most unobstructed way.

The U.S armed forces have evaluated the EZ Raider and, after a successful set of tests, have purchased a number of them in order to continue the operational evaluation. The Israeli Defense Forces (IDF) are also in the middle of an operational evaluation. Mistral, a U.S company, is working with the U.S armed forces to make the EZRaider HD 4 a standard item that can be purchased by the different fighting units.

Eyal Eizenberg, a major general in the reserves who led Israeli forces in the 2008-2009 operation into Gaza, told Breaking Defense that the EZ Raider HD4 offers a real revolution for special operators. “Usually special forces using helicopters are moving after landing by foot or by different types of vehicles. These two options have their predefined definitions about time from landing to contact,” he said. “This new revolutionary vehicle creates an unexpected dimension when it comes to speed and distance and that  among other things create the capability to surprise the enemy. It will without any doubt make a revolution in the operation of special forces.”

The interest is not limited to the armed forces. Recently the EZ Raider was tested in a drill that was designed to improve the readiness of local law enforcement organizations to cope with emergencies. An American source said that in this drill the Israeli-developed vehicle was tested “above and under the ground.” He refused to elaborate.

The EZ Raider HD 4 can carry up to two fighters with full combat gear, and it can tow a special cart to carry additional gear. The cart is powered by two 1200 W electric motors with high torque that allow precise response to user commands using an intuitive and accurate driving system control. A 3,000 kW battery gives the vehicle an operational range up to 80 km.

According to the Israeli company, the EZ Raider HD 4 can be easily folded for transportation. It’s 27 inches wide and weighs 209 pounds.

Miki Bar, DSraider CEO, told Breaking Defense that the vehicle can carry up to 370 pounds and pull an additional 550 pounds equipped with Raider electric powered cart. The four wheels are connected to special suspension systems that gives every wheel an independent horizontal and vertical movement “that allows the vehicle to cope with rough terrain,” Bar explained. “The soldier uses body movements like the ones skiers or water gliders use to control the movements.”

The board on which the soldier stands is 20 inches above ground; this reportedly adds to the vehicle’s ability handle rough terrain.

Bar added that the IR signature of the vehicle is very low, adding to its stealthy qualities: “The electric motors emit something like 122 F, and that can be lowered with simple heat shielding materials.”

The Israeli police are already using the EZ RAIDER HD in its border police units.

Giora Eiland, former head of the Israeli National Security Council, was also commander of an airborne battalion and the chief officer of the IDF’s infantry corps.

“This vehicle can be of great help in mountainous areas where the oxygen percentage is low, and the fighter carrying a heavy back pack in addition to a weapon is very limited in his pace of movement,“ Eiland told me. “We in the IDF years ago tested small buggies for such missions, but they were noisy and did not have the capability to cope with obstacles that the new vehicle has.”