US Must Boost War Games, Data Sharing With Allies: DIA 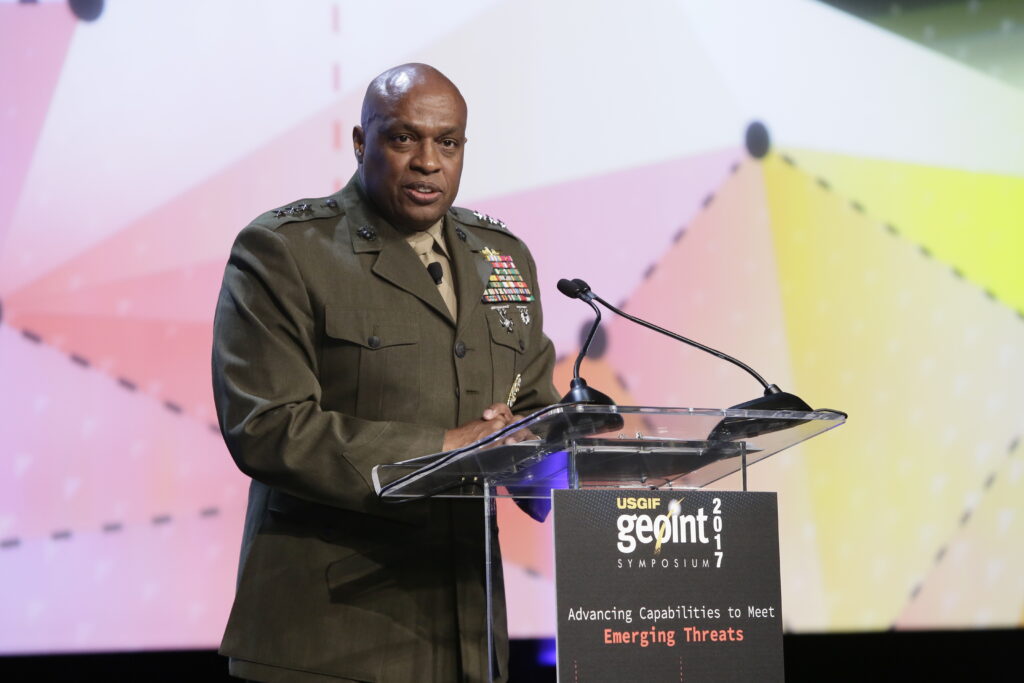 GEOINT: In a stark speech clearly intended to get people off their complacent butts, the Marine general who leads the Defense Intelligence Agency told an approving audience here that the Intelligence Community risks becoming as irrelevant as the Kodak film company became with the advent of digital photography.

“Let me ask you one final question. What will your story be, a great story of the past, (for example) how successful we were during the Cuban Missile Crisis, or do you want to embrace the new environment?” Lt. Gen. Vincent Stewart boomed out. Later, during question and answers, he said: “Sometimes there is the sense that our success in the past is enough for our success in the future” — a sentiment he clearly scorned.

He told the crowd here that he thought he could probably design an independent intelligence system, one reliant entirely on open sources, that could “deliver a 60 percent solution six weeks earlier” than the “100 percent solution” the IC would deliver six days after the event they were trying to predict.

Heads nodded in the crowd, though many faces wore the classic poker face of the IC professional.

Stewart went on, after delivering his speech, to note that the military has “gotten away from the business of effective war gaming. I’ve got to find a way to get back to effective wargaming,” saying “bland tabletop” and similar exercises were not very useful. We need “rich blue data, rich enemy data, where we can actually compete in a meaningful way. We don’t…do that very well,” he said. Such rigorous wargames could help decisionmakers allocate scarce Intelligence, Surveillance, and Reconnaissance (ISR) assets in a crisis or intelligently shift forces from the Atlantic to the Pacific.

By way of contrast, Stewart noted that famed World War II Adm. Chester Nimitz “said they did so much war gaming prior to World War II…that there was only one thing that surprised them, the kamikaze. We don’t do that kind of intensive war gaming where are continually learning from the environment and learning from each other.”

This is a recurring complaint I’ve heard from colonels and majors in the last few years. They won’t go public with specific criticisms, but they’ve told me that many of the games they participate in are still “rigged” to be safe and ensure that US forces win without any “cheating” by either them or the enemy. War, of course, is often won by upending the rules.

Speaking of rules, Stewart excoriated the existing system that governs information sharing with allies and partners, saying the vaunted Five Eyes model — the sharing of secrets among a privileged inner circle of the US, UK, Australia, New Zealand, and Canada — is “a relic of the twentieth century.”

US intelligence is “still stalking some of these old paradigms, that say, I own the data, and I’m not going to share the data, because if I share the data, there’s risk,” he said. Instead, the US must “bring in a wide range of (foreign) partners….We’ve got to break up all that of intel sharing and start over.” The solution? He didn’t offer specifics but he did say the problem is “almost purely culture.”

Stewart noted that the Intelligence Community is building the IC IT Enterprise (ICITE), which tags data so it can, in theory, be shared. So it’s not just the idea of sharing information with other countries. Just the idea that the data can be shared within and across the United States’ own Intelligence Community runs into opposition: “The idea that we would crowd source analysis is scary as heck to our culture.”

This has been a consistent theme here at GEOINT, that senior intelligence analysts fear for their jobs as their bosses talk about artificial intelligence, machine learning and powerful algorithms. Although Robert Cardillo, head of NGA, and every other senior intelligence official with whom I’ve spoken here says that idea is to make the analysts more effective and free them from drudgery, such as spending hours and hours watching video to see if anything new or untoward happens, this fear persists.