US Must Do More To Deter ‘Reckless’ Russia: Farkas 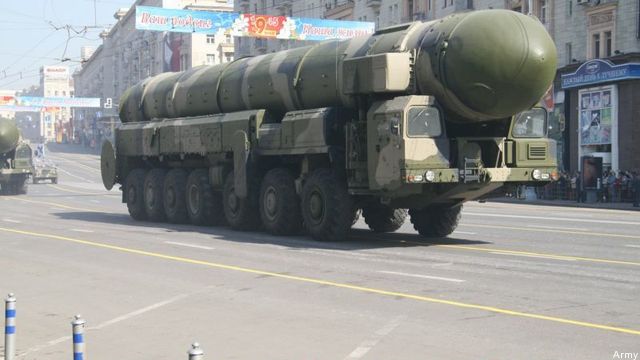 WASHINGTON: Until 5pm last Friday, Evelyn Farkas was the Pentagon’s top policy expert on Russia. At 8am this morning, the recently liberated Farkas proposed a Russia policy much more assertive than what her former superiors have  publicly endorsed — at least, so far. She wants the US to consider sending (defensive) lethal weapons to Ukraine, basing ground troops permanently in Eastern Europe, making the European Reassurance Initiative permanent, and providing military aid to more countries along Russia’s borders.

“We have to continue reassuring, but we have to do one better, we actually have to deter,” Farkas told reporters at a Defense Writers’ Group breakfast today.

No, we’re not back in the Cold War. “First of all, clearly, Russia is not the Soviet Union and they are not strong economically and they are brittle politically,” she said, “but that doesn’t mean they’re not a danger.”

“In the Cold War… there was a healthy respect for the immense, horrific power of nuclear weapons and that was really the last resort,” Farkas said. Bu the modern Russian military embraces a paradoxical doctrine of “escalate to deescalate” in which it would unleash nuclear weapons to bring a speedy peace. This idea, she said understatedly, is “highly alarming.”

Such statements provide a valuable window into the Pentagon that Farkas just left. She emphasized she resigned for personal reasons, not over policy, which is a perfectly reasonable claim for someone who’s spent three grueling years in an administration that looks like a lamer duck each day. Yes, she went beyond the current party line, but that may not be the reason she left. If anything, her ideas may be a sneak preview of where the administration as a whole is heading as frustration with Russia mounts.

Frustration with Russia, Farkas has in plenty. “Here I’ll go out on a limb beyond what [the] administration would say: The NATO-Russia framework agreement is broken. The Russians broke it,” she said. The first clause of the landmark 1997 pact binds all parties to respect the “sovereignty, independence and territorial integrity” of European states, such as Ukraine.

“Russia’s broken it but somehow we are and our allies have decided that we’re going to keep up with the letter of it even, although maybe not the spirit,” she said. Under that 1997 accord, NATO foreswore “additional permanent stationing of substantial combat forces,” especially into the new members that joined after 1991. Farkas stopped short of saying the US should put permanent forces into eastern allies like Poland or the Baltic states, saying US European Command had to study the problem.

Such permanent basing would go beyond the current approach, which rotates US units through temporary tours of Eastern Europe to reassure and train with allies. The military aspect is called Operation Atlantic Resolve, and it’s funded through the European Reassurance Initiative.

The issue with ERI is that it’s paid for as emergency funding — Overseas Contingency Operations (OCO) — rather than as part of the base budget, Farkas said. Our European allies are “pretty savvy” about what that implies about ERI’s permanence or lack thereof, she said. Moving it into the base would be a strong signal of enduring US commitment.

It’s not only European allies the US needs to reassure, however. Countries along Russia’s periphery — the “near abroad” nations once part of the Soviet empire — need propping up against Putin’s pressure.

“I was very excited to see this past week Secretary [of State] Kerry go through Central Asia,” she said. “We need more high-level attention being paid to the countries that feel directly threatened by Russia…. not just Ukraine but Moldova, Georgia, Azerbaijan… The countries around the periphery of Russia, they need our political attention. They also need our economic assistance and they need our military assistance [to] deter Russia.”

(Of course, from Moscow’s perspective, US outreach to nations all around its periphery looks a lot like encirclement).

Finally, Farkas commended the Pentagon’s still-evolving investments to counter Russian capability. “I want to actually commend Deputy Secretary [Robert] Work because he really took on the challenge of how do we better deter Russia, very seriously and I would say aggressively,” she said. “He has made sure that there is funding directed to deterring Russia in areas where we have specific concern — and I can’t go into all of them, obviously — but he is taking a sharp look at the budget for of course FY16 but also more importantly FY17.”