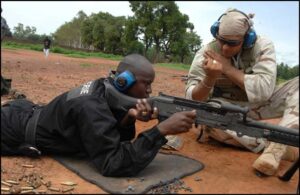 WASHINGTON: Two US special operators assisted with this morning’s hostage rescue operation in Bamako, Mali, a US Africa Command spokesman confirmed. The operators were in Mali already as advisors and so could swiftly respond to support the local forces, Col. Mark Cheadle told me. The Americans advised their Malian counterparts, who conducted the rescue, and physically helped move at least six American citizens to safety once the Malians had extracted them from terrorist-held hotel.

“They were not kicking down the door,” emphasized Col. Cheadle, AFRICOM’s chief of public affairs, when I buttonholed him after an unrelated press event. “They assisted with the movement of the American citizens, [but only] once the American citizens were outside the hotel….and they were advising the Malian special operations forces. Malian special operations forces are the ones who should get the credit here.”

A crucial point: American servicemembers weren’t shooting at the terrorists, and vice versa. In fact, worldwide, the US modus operandi is to let local allies — in this case the Malians — kick in the door while Americans provide tactical advice and technical support, such as operating drones. When that division of labor breaks down and Americans go in shooting, you tend to get heroic tragedies like the late Master Sgt. Joshua Wheeler’s rescue of Kurdish peshmerga in Iraq.

While the public spotlight focuses on US airstrikes in the Middle East and US ships challenging Chinese-claimed waters in the Pacific, the Obama administration strongly prefers small-scale and non-violent support to local partners. That approach was pioneered by Army Special Forces but is now embraced by the “Big Army” as well, which assigned conventional units to partner with given groups of countries as “Regionally Aligned Forces.”

The first regional brigade was assigned to Africa Command, which has neither the resources, the authorities, nor the political backing to go in big, guns blazing. The hostage rescue in Mali’s capital of Bamako, with a small US contingent supporting the Malians and perhaps the French, is a microcosm of the kind of cooperation required.

“I don’t think anybody has all the skills or all the understanding do any of this themselves, nor do they have the resources,” said Gen. David Rodriguez, the AFRICOM commander, at a long-scheduled breakfast with the Defense Writers’ Group. “The only places that we have done anything unilaterally have been really the two most ungoverned places in Africa, which is Libya and Somalia.”

What African militaries want most from the United States is training and technology for intelligence, command, and control, Rodriguez explained. That said, he noted, their human intelligence (HUMINT) based on local sources is far better than ours.

American’s logistical might is also much appreciated: Even the French, with long experience in Africa, often depend on our transport and refueling aircraft to cover its vast distances. US forces also provide training in such areas as engineering, defusing improvised explosive devices (IEDs), and, yes, conducting special operations such as direct action and counter-terrorism.

US-trained counterterrorism units in Cameroon, Chad, and Niger are working together against terrorist group Boko Haram, notorious for mass kidnappings. Nigeria and even tiny Benin are also coordinating operations against the group, and the Africans are backed by a US-French-British intelligence cell. Similar Western-backed coalitions of multiple African nations are fighting terrorists in Somalia and Mali.

Nor are the Africans mere recipients of Western knowledge. Many nations have their own expertise in some particular area that makes them a model for their neighbors, Rodriguez said. Botswana and Namibia are leaders in the fight against illicit trafficking — of drugs, people, weapons, etc. Mauritania, with US help, built an impressive intelligence, surveillance, and reconnaissance capability that Mali has now asked to use. Morocco has “great training capacity.”

“The Africans working together…that continues to grow,” Rodriguez said. “As they build their ability to generate their own forces and train their own forces, they’re going to be able to train each other. I think that’s the next step.”

It’s a slow, laborious process. But it has the potential to get big results with small infusions of US forces, as we saw in Bamako today.

A note to readers: We had conflicting information on the number of Special Operators involved, and briefly this article stated there was only one. AFRICOM now confirms their original statement to us that there were indeed two.