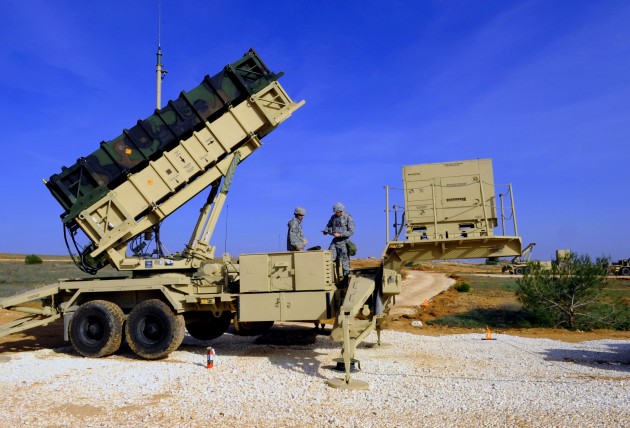 HUNTSVILLE, ALA.: US missile defenses can hit a bullet with a bullet, shooting supersonic weapons right out of the sky — when they can see them. But as the Russians are showing in their invasion of Ukraine, radar can be jammed.

That’s why the US Army conducted an unprecedented wargame this spring to test its new air and missile defense network against advanced electronic warfare techniques. The highly classified exercise at White Sands Missile Range produced a staggering 70 terabytes of data, twice the size of Wikipedia. It will take a year to analyze the lessons-learned and implement needed fixes to Army systems, Brig. Gen. Neil Thurgood, the Army’s Program Executive Officer (PEO) for Missiles & Space, said. Another such exercise will occur in 2017, Thurgood told the Space & Missile Defense conference here. Then the Army plans to hold them every other year. 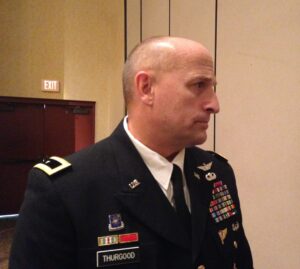 The Army’s own electronic warfare arsenal is painfully thin, with offensive jammers not set to enter service until 2023. No wonder, then, that the White Sands exercise assumed the enemy was on the electronic offensive and tested how US air and missile defenses would hold up.

The exercise tested an early version of the Integrated Air & Missile Defense Battle Command System, which links together sensors, launchers, and command posts. The idea is that a battery no longer has to rely on its own radar but can get targeting data from any radar in the system — even if the two weren’t originally designed to work together, for example a Patriot launcher and a THAAD AN/TPY-2 radar.

The original inspiration for IBCS was simple efficiency. It will replace a half-dozen different command and control systems for air and missile defense, and it will allow the Army to mix-and-match elements from different weapons systems as needed. But the Army also realized that IBCS could help defeat radar jamming. If one battery’s radar is jammed, spoofed, or hacked, IBCS allows it to stay in the fight using data from radars that are in different locations and/or on different frequencies. Better yet, IBCS will combine data from different radars into a single “composite track” of a given target, allowing radars with an accurate picture to correct radars that are being spoofed.

“Today, we don’t hook all those together. We don’t see one single air picture, one composite track for one target,” Thurgood. But in the exercise, “we had the Patriot weapon platform, the Sentinel [radar], the Avenger weapon platform, [and others] all linked to IBCS, all making the composite track, one track from all the sensors, and we practiced engagements… against an electronic warfare adversary that mirrors what’s happening in the Ukraine and what we project is happening with other potential adversaries around the world.”

Traditional analog jamming can be effective, but it’s pretty obvious, Thurgood said: It just blasts out interference in selected wavelengths in a given area. But the Russians, Chinese, and others are using advanced digital jamming which attacks specific frequencies and can spoof the radar. Essentially, they record an incoming radar pulse and play it back in distorted form, confusing the radar receiver.

The distorted return signals can cancel out the true one, “like a set of Bose noise-cancelling headsets,” Thurgood said, or they can create “multiple false targets.” US missile defense batteries might be tricked into firing scarce interceptors at empty air while the real threat slips through. That’s a problem the Army wants to figure out in wargames before it ever faces it in real life.