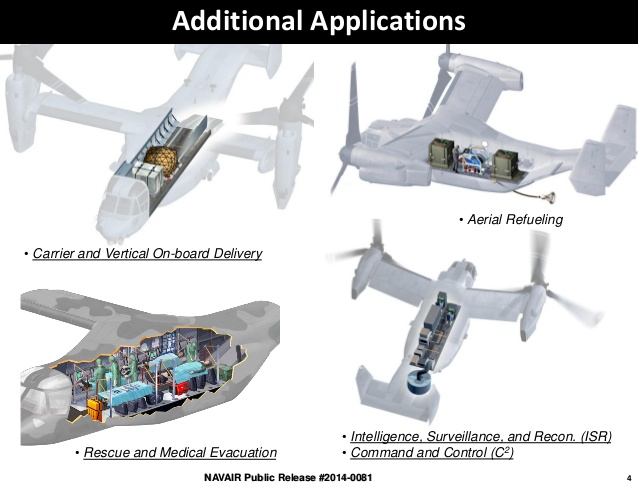 When the Marine Corps developed the V-22 Osprey in the 1980s, the vision was pretty simple: fly troops ashore in amphibious assaults launched from beyond the range of anti-ship missiles. Now they’re turning the Osprey into a gas station. The Marines clearly envision the tiltrotor as a sort of flying Swiss Army knife.

One clear example is yesterday evening’s $58.8 million cost-plus-fixed-fee contract award to the Bell-Boeing Joint Project Office to keep developing the V-22 Aerial Refueling System, aka VARS. The VARS includes a portable refueling station that will roll up the Osprey’s back ramp and into its back cabin. Crews will use it to aerial refuel F-35s, F/A18 Hornets and other aircraft – including V-22s and CH-53 helicopters – by extending a hose and drogue out the open back ramp.

“This is a long desired capability for V-22,” an industry official following the program said. “You talk about force multipliers — that’s what this is.”

“Marine Corps Ospreys with VARS will be able to refuel the F-35B Lightning II with about 4,000 pounds of fuel at VARS’s initial operating capability. MV-22B VARS capacity will increase to 10,000 pounds of fuel by 2019. This will significantly enhance the F-35B’s range, as well as the aircraft’s ability to remain on target for a longer period,” Capt. Sarah Burns, a spokeswoman at Headquarters Marine Corps, says.

The close personal relationship between the F-35 and the V-22 gets deeper, as Breaking D readers know. The Osprey will carry F-35 engines to and from aircraft carriers and amphibious assault ships. This was first demonstrated on the USS Wasp.

VARS is just one of several ideas the Marines have for how to use their MV-22B variant in ways far beyond the old-fashioned assault support missions – hauling troops and cargo – flown by the CH-46 Sea Knight helicopter the Osprey replaced. Since the Osprey went into service in 2007, the Marines have found that its ability to take off and land like a helicopter, then tilt its two wingtip rotors forward to fly as fast and far as a turboprop airplane, offers new possibilities the original designers didn’t consider.

The Osprey itself can already take fuel from tankers in midair, extending its range far enough to cross oceans. That has allowed the Corps to set up two 2,300-marine Special Purpose Marine Air Ground Task Forces for crisis response, one in Spain and one in the Middle East, that use MV-22Bs to cover vast areas. The Osprey’s range allows the shore-based MAGTFs to function like Marine Expeditionary Units, which normally deploy aboard ships.

Lt. Gen. Jon Davis, deputy commandant for aviation, has talked about using the Osprey to carry weapons packages, fitting a laser designator under its nose a la the MQ-1 Predator drone so it can guide its own or another aircraft’s weapons to targets, or outfitting the MV-22B with sensors and data links to turn it into an Intelligence, Surveillance and Reconnaisance aircraft. But for the moment, the program is focused on adding the VARS capability, which is also seen as a draw for potential foreign navy buyers.