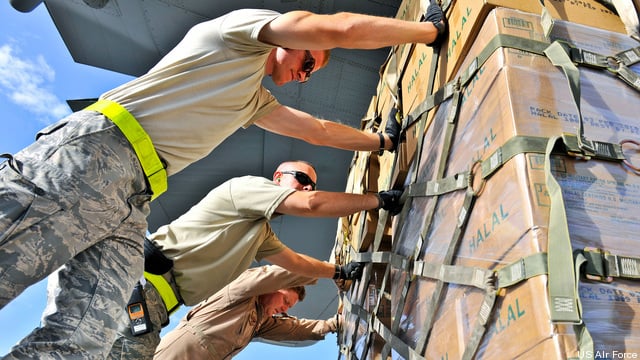 WASHINGTON: As the United States military begins to leave Afghanistan, the Defense Logistics Agency is emptying its warehouses there of stockpiled supplies such as copper wire and shipping them back to the States, says DLA Director Vice Adm. Mark Harnitchek.

Harnitchek expects the supply agency’s spending will shrink from a wartime peak of $46 billion last year to a bit over $30 billion once (most) US troops leave the country in 2014. Although he doesn’t plan to cut the agency’s workforce of 27,000 civilian and military personnel, Harnitchek said at this morning’s Defense Writers’ Group breakfast that he is seeking another 10 percent in savings through efficiencies in how DLA buys supplies, from holding “reverse auctions” to reducing inventories.

The costliest complication to DLA work is the continued impasse over reopening supply routes through Pakistan, closed since an errant US airs trike killed Pakistani troops last fall. Since then Islamabad has demand higher –some would say extortionate — transit fees and a formal apology. Because of this, shipments in and out of Afghanistan must now move either by air or via a tangled overland route across a dozen countries of the former Soviet Union. That “Northern Distribution Network” costs an extra $100 million a month, Defense Secretary Leon Anetta told Congress earlier this month. The cost per pound is almost three times as much: about $20,000 per 20-foot shipping container sent from the US to Ba gram, versus $6,000 to $7,000 via Pakistan. That means the Northern Route, although it’s overland, costs nearly as much per pound as sending supplies by air. In fact, said Harnitchek, “we’re actually flying food now”: Instead of sending rations overland, DLA packs huge transport aircraft full of foodstuffs, then loads them up with excess inventory headed back to the US to get the absolute most out of every flight.

While food may fly, fuel does not, Harnitchek said. That alone makes some overland access indispensable. Asked whether Moscow might follow Islamabad’s lead and shut down supply lines — for example, to pressure the US over Syria — Harnitchek said no one country can shut the northern network down. “If you lose Russia, if you loose Uzbekistan, we plan for that,” he said. “Nobody is absolutely vital.”

Though pulling out US equipment and supplies through the northern route will be more costly and difficult than coming out through Pakistan, Harnitchek said he is “very confident we can do it.” DLA does not decide what weapons and heavy equipment will get shipped back from Afghanistan — that’s for the four services to determine — but it is in charge of mundane supplies (like that copper wire) and of properly disposing whatever is left behind, with work yards in Afghanistan that can shred an entire MR AP armored vehicle. “We sell the scrap,” he said.

So the logistics agency will have plenty of war work through 2014, but Harnitchek is already looking ahead to the inevitable downsizing after wards. “We’re at a sort of turning point here,” he said.

Less than an eighth of DLA’s spending, about $5 billion a year, goes to its own personnel, operations, and facilities. $41 billion goes out the door to commercial contractors to buy and ship supplies abroad, and that figure will shrink dramatically as the troops come home. DLA global operations will shrink as well, with a major distribution depot in Kuwait to be closed next year, for example. But Harnitchek wants to squeeze another $10 billion from the budget by 2018 by adopting new buying practices.

One way to do that is to improve DLA’s modeling of future demand. “We do not do a very good job forecasting what our needs are,” he said. As a result, “we buy way too much inventory we don’t use and then we keep it too long…. That has been a legacy problem as long as I’ve been in the logistics business.”

Harnitchek will also get DLA out of the business of stockpiling materials — and managing costly inventory — for which a robust commercial distribution system already exists.

“We don’t buy food and warehouse that” anymore, Harnitchek said. “We don’t buy pharmaceuticals and warehouse that.” Instead DLA now relies on the private sector to have food and drugs available in bulk whenever the agency needs to buy them for immediate shipment to US forces. Harnitchek has his sights on mundane hardware next: “Light bulbs, nuts, bolts, door hinges [etc]. It’s a big part of our business,” he said. “Why should I buy and warehouse that stuff” when a vast commercial industry can provide it on demand?

Another innovation the DLA director is pushing is to replace traditional sealed-envelope bidding with something called a “reverse auction.” It’s a common commercial technique he saw work well for the Navy. Instead of different suppliers submitting their bids secretly and simultaneously, with the government choosing the lowest, the reverse auction lets each competitor see what the others are offering — and then propose a lower figure. Only when no one is willing to drive the price lower does the bidding stop.

Harnitchek is also looking to commercial airlines as a model for how to buy fuel — a huge business for DLA — by timing purchases to exploit short-term dips in price. Everyone remembers, of course, the incredible $400 a gallon costs to get fuel to some parts of Afghanistan, something no one wants to see repeated.