What a Difference Two Wars Make: No Battles Between Army, Guard And Reserve 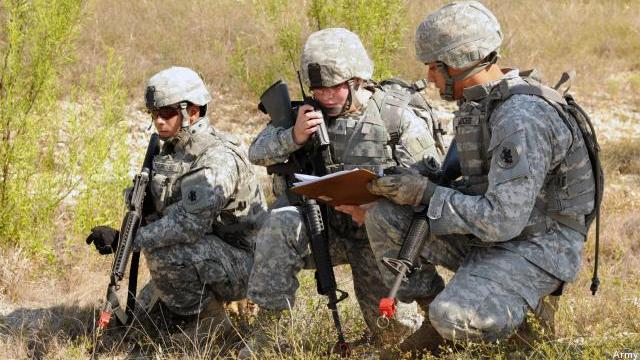 WASHINGTON: As the Army has been handed its largest manpower cuts since the end of the first Persian Gulf War and its acquisition accounts are being squeezed dry trying to find room for programs like Mine-Resistant Ambush Protected vehicles in its base budget, the atmosphere among the active, Guard and Reserve components is – surprisingly — “we’re all in this together.”

This is a far cry from the last time the Army faced such challenges, say the two men who directed the Army National Guard and served as chief of the Army Reserve following the Sept. 11 terrorist attacks.

“The Army is designed to be an integrated force,” Roger Schultz, who became the first three-star director of the Army National Guard, said in an exchange of emails. “Only by radically altering the force design can active component units accomplish the range of tasks required for sustained operations without reserve component assistance.”

One of the things driving this is that, he said, is that “given the level of integration that is now in place, the National Military Strategy requires more reserve component participation, not less.” This marks a major change from the 1990s, let alone after Sept. 11.

“This is a different way of fighting wars,” Plewes said. “The reserve components have to be ready from Day One. They have shown they could be called up and do well.”

Both admit there was a learning curve in changing the Army National Guard and Army Reserve into an “operational force” to fight in Afghanistan and Iraq. Schultz cited the Army Force Generation model, which he says has helped the Army as a whole adjust to the manpower demands of two wars.

It also sharpened training, knowing that a deployment to Afghanistan and Iraq was scheduled for a certain date. “That didn’t exist before,” Plewes said. It was often a case of catch-as-catch-can, cross-leveling soldiers and gear and “volunteering” for deployments. “ARFORGEN also put a requirement in place to have the equipment ready for soldiers to train on. You have to be full up” on what is going to be used on the mission “or you’re back to tiered readiness.”

A second point bringing the components closer together was the transition to modular formations. To put it simply, one light infantry unit now looks like any other. “These changes apply to the active component and the reserve component units. This is a major element of difference from 15 years ago,” Schultz said.

Training has made a significant difference as well. “Soldiers and their leaders are better prepared for their assigned missions” because of the more realistic training they have with the equipment they will use in the deployment, Plewes said. In the case of the National Guard, Schultz added that the adjutant generals now have to certify that their soldiers and airmen are trained and ready. For the Army Reserve, the certification comes from Forces Command.

“We have invested billions in the current design [of training and equipping]. This investment has been made over years” and “tweaking this model must be done very carefully,” he added.
The equipping model is going to be difficult to maintain with a smaller active force. The Army is seeking $22.9 billion for Fiscal Year 2013 modernization, down from the $24.3 billion it is spending on equipment this year.

In fact, the request for modernization spending is down by almost two-thirds since fiscal 2008. Then the Army was busily replacing equipment damaged or destroyed in Afghanistan and Iraq and buying equipment like M-RAPs to better protect soldiers against roadside bombs and ambushes. Almost all this “extra” money came through emergency spending bills and was not included in the base budget.

Those days are over.

Even without the budget pressures, Plewes doubted that there could be a return to viewing the Army National Guard or the Army Reserve as a strategic reserve anytime soon. “Look at civil affairs, medical, they are deeply embedded in the reserve component and have been accessible” for deployments certainly since Desert Shield/Desert Storm. “When you look at the Army’s requirements, you see the need for the reserve components increasing and the need for them to be accessible.”

“Battle focused planning and training will still be required,” Schultz said to keep soldiers and units ready. He and Plewes expect more theater engagement missions and rotational deployments to be handed to the Army National Guard and Army Reserve, as well as the active component.

Schultz cited the Partnership for Peace program with former Warsaw Pact nations and the work Guardsmen have done in agricultural development in Afghanistan.

There are some hidden dangers with these missions, however, Shultz said. “Theater requirements seldom match existing unit design and [they can mean] breaking up units to align” with those requirements.

Neither sees immediate challenges to Army National Guard or Army Reserve recruiting or retention. Both will revert to enlisting soldiers leaving active duty. But the two components will have a different kind of soldier in their ranks – soldiers who are used to deployments and expect to do more than attend monthly drill, Plewes said.

“Challenge them, support them and support their families and employers,” Schultz said.
“Understand that resources and time are the major drivers of any readiness condition. Time is a precious resource for every soldier in the Army. It is even more significant to an RC soldier.”

Plewes said that it was important to help soldiers leaving active duty find meaningful employment in civilian life. “That can be a challenge now,” referring to the still slow economy and higher than peer unemployment rates for veterans under 25 entering the job market.

The Army seems to have come full circle from the early 1990s in how the components respectfully view each other. Ironically. so has the Air Force, the model then of integration, as tempers heat up over its plans – especially for the Air National Guard and its and the Air Force Reserve’s bases. In late February, the National Governor’s Association took the unprecedented step of asking Congress to reject the Air Force’s budget out of hand.

What a difference two wars make.