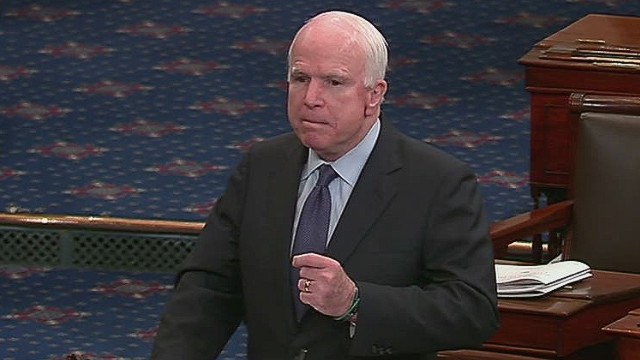 Accusing the Senate Armed Services Committee of trying “to micromanage DOD” by taking those and other measures, the Office of Management and Budget statement says that senior officials would recommend President Obama veto the bill. Much of the criticism is aimed straight at the acquisition changes McCain is pushing hard.

McCain shot back with a statement scathing even for him. “Like all products of bureaucracy, the Statement of Administration Policy is a sorry defense of the status quo: misalignment of authority and accountability, deficits in strategic integration and harnessing innovation, bloated staffs, a broken defense acquisition system, and dependence on Russia for access to space,” the senator said. “In its laundry list of imaginary doomsday scenarios, the Administration repeatedly misstates and misconstrues provisions of the NDAA, leaving one to wonder how closely Administration officials read this legislation, or whether they read it at all. I hope when the NDAA reaches the President’s desk, he understands the critical importance of this legislation to our national security better than his Administration seems to now.”

Chief among the administration’s objections: The bill “would dissolve the Office of the Under Secretary for Acquisition, Technology, and Logistics (USD/AT&L) and replace it with failed models of the past,” the statement claims, stating that Kendall’s office “has a track record of improved acquisition performance for the taxpayer since the implementation of the Weapon Systems Acquisition Reform Act of 2009 (WSARA) and the Better Buying Power initiatives.”

That’s true, but it’s also true that the number of programs managed by ATL has dropped significantly, as have new starts. Since Kendall’s office was created as a reform, the overall record of the department is that weapons programs cost much more than planned and take longer than expected.

But wait, there’s more the administration doesn’t like about the bill! “For example, it would rigidly prescribe the use of a wide range of contracting methods in circumstances that history has proven are not appropriate or efficient in meeting the military’s needs,” the statement says. “It would prescribe onerous, across-the-board cuts to senior military billets, civilian executives, and contractors at a time when the Department is already undertaking a 25 percent cut to headquarters activities and other significant reforms to become leaner and more efficient.”

The administration objects strongly to SASC efforts to constrain the size of the bloated National Security Council, saying that the “arbitrary limitation of 150 professional NSC staff” isn’t good. After all, the OMB statement says, “the combined staff of the Senate Armed Services, Foreign Relations, Homeland Security, and Intelligence Committees is larger than 150 people.”

Of course, that ignores the fact that the law establishing the NSC makes clear it’s not designed to provide oversight of all defense and intelligence policies and spending but should coordinate policies across the government. Historically, that has rarely required more than 50 to 60 people. Even under the second President Bush it was usually below 100.

The administration argues they increased the size of the NSC staff “after a 2009 review recommended the creation of additional directorates and positions to address emerging threats and challenges, such as cybersecurity and weapons of mass destruction-related terrorism.” Of course, that recommendation was made by the Obama administration. Grudgingly acknowledging they had goofed by letting it get so big, the statement notes that they have cut staff “by 12 percent in the last eighteen months.”

Finally, we won’t talk about it much, given what a fallacious and partisan issue it is, but the bill wants to constrain the executive from closing the prison where terrorists are kept at Guantanamo Bay or from transferring detainees sending them “to numerous countries on the basis of State Department travel warnings.” There are other things but you can read them in the statement (embedded below).

Of course, this OMB statement was written before the Senate voted on Sen. McCain’s his amendment that would add $18 billion to the 2017 National Defense Authorization Act. The senator would join the House in adding $18 billion to the department’s budget. (The House uses a fiscal sleight of hand involving Overseas Contingency Operations funds, one the administration has denounced). Of course, the armed services committees are only authorizing the money. The folks who actually make the decision about how much money the Pentagon receives — the House and Senate appropriations committees — have shown no inclination to back their authorizing cousins.