Why Air Force Needs Lots Of F-35s: Gen. Hostage On The ‘Combat Cloud’ 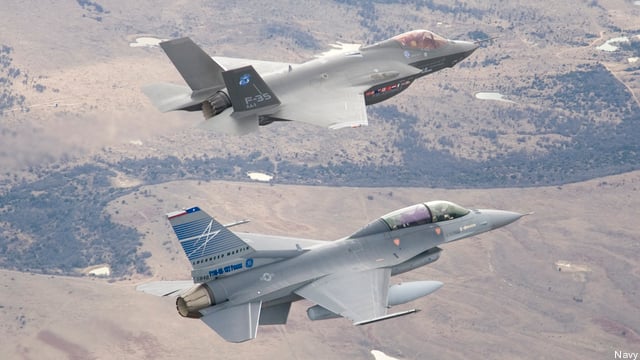 Technology is not enough. What’s equally essential is ideas for how to use it. Wielding new weapons in the same old way is a recipe for defeat. As the US military today invests in innovative programs, none larger than the F-35 Joint Strike Fighter, it must also invent innovative concepts of operation.

The Air Force’s point man on global deployments is Gen. Michael Hostage, head of Langely, Va.-based Air Combat Command. Recently, two members of the Breaking Defense Board of Contributors, Dr. Robbin Laird and retired Air Force Lt. Gen. David Deptula, sat down with Hostage to discuss not just the new weapons systems, but a new vision of how to use them, an emerging concept of operations that Gen. Hostage calls “the combat cloud.”

Instead of focusing on individual planes, squadrons, or “strike packages” executing a particular mission, the new concept looks at all the deployed aircraft as a whole, linked together by secure wireless networks into the “combat cloud.” This cloud would be enabled by “fifth generation” aircraft — specifically F-22s and a substantial number of F-35s — and their ability to connect electronically both to each other and to legacy aircraft. This critical connectivity would be built in to any systems added in the future, such as the proposed long-range intelligence, surveillance, reconnaissance (ISR) and strike aircraft.

What follows is an edited excerpt from Laird and Deptula’s conversation with Gen. Hostage.

Laird & Deptula: How important are the 5th generation aircraft to shaping the “combat cloud” which you see as essential to the next phase of air combat capabilities?

Hostage: They are central to the transition. We are operating in contested airspace and need to shape a distributed air operations capability. The F-22s aggregated in appropriate numbers can do some amazing and essential tasks, and with a significant number of F-35s, we can reshape the operational space.

The ability of the planes to work with each other over a secure distributed battlespace is the essential foundation from which the air combat cloud can be built.

And the advantage of the F-35 is the nature of the global fleet. Allied and American F-35s, whether USAF, USN, or USMC, can talk with one another and set up the distributed operational system. Such a development can allow for significant innovation in shaping the air combat cloud for distributed operations in support of the Joint Force Commander.

Laird & Deptula: Historically, the evolution of aircraft has been described in terms of change in the form factor [i.e. their visible, physical size and shape, rather than their invisible, internal electronics]. This is really changing with the F-35. What is your thinking on the impact of this change and the introduction of software-upgradeable aircraft?

Hostage: The 5th generation aircraft will enable the air combat cloud and allow me to use my legacy assets differently. Many of my 4th generation fighters can be used to extend the network of linked systems, providing reinforcing fires, and I can focus on the 5th generation assets as the core nodes shaping distributed joint capabilities.

And when we come to the evolution of “next” generation systems, the form factor could stay quite similar as we evolve the capabilities within the planes or in terms of how the flying systems can interact and operate together.

Rather than thinking of 6th generation aircraft in form factor terms, we can operate the new air combat cloud and leverage that moving forward.

Laird & Deptula: How important are numbers for the F-35 from this perspective?

Hostage: Very important. It is not a boutique aircraft. The full impact of the F-35 aircraft comes with its fleet operational capabilities for the enablement of the air combat cloud.

Another advantage of the F-35 is that is built to evolve over time as the environment evolves. Software and hardware upgradeability will allow changes over time to the fleet, not just individual aircraft.

Laird & Deptula: In other words, your focus on the air combat cloud is joined at the hip with an emphasis on shaping distributed operational capabilities. The two meet in a fundamental reality-21st century air operations need to be re-shaped to ensure mission success in the period ahead. It is distributed; it is global; and it is about connectivity across a distributed battlespace.

Laird & Deptula: How is the legacy of the past decade in air forces operating in conjunction with ground forces in Iraq and Afghanistan to be carried forward with this approach?

Hostage: It will be important to be able to deliver situational awareness to the ground element but it cannot be done the same way as we have done it over the past decade.

For example, the preponderance of our current fleet of MQ-1s [Predators] and -9s [Reapers] that are so effective in the permissive airspace over Afghanistan and other locations in the mid-east simply may not be transferable to the vast expanses of the Pacific or in contested airspace. The right kind of RPAs [remotely piloted aircraft, aka UAVs or drones] can make a contribution, but again it will be as part of the air combat cloud which defines the role of the RPAs, not the other way around.

In contested airspace and in the operational area of the Pacific, the same means certainly could not achieve the same ends. With a 5th generation-enabled combat capability, one could put the pieces in place to deliver the operational situational awareness critical to joint forces, but this would be difficult if one does not have the 5th generation aircraft in the numbers required.