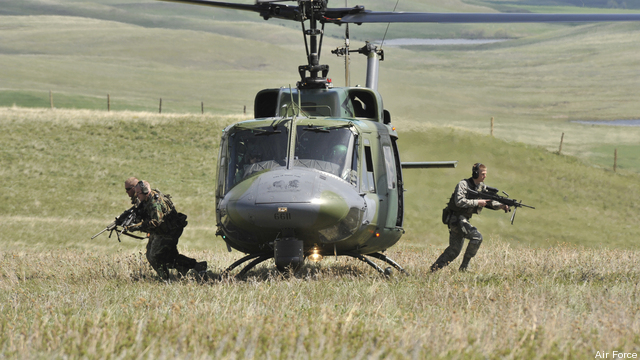 ORLANDO: The nation doesn’t need to rush out and buy the Common Vertical Lift Support Platform, designed to rush troops to nuclear sites or to evacuate senior lawmakers in event of a strike against the capital, because security at missile and other facilities has improved. And there’s not much money around to buy it with.

But Kowalski’s main point during the briefing was that security at ICBM sites has improved considerably and the pressing need for CVLSP just isn’t as pressing as it once was. Oh, and then there’s that budget thing we all keep hearing about.

“It’s just a matter of, can we take risk for a few more years. Yes, probably. Well, I guess we can because there’s no money,” said the refreshingly blunt-spoken general.

On top of that, Kowalski said that the current Huey helo fleet is, “frankly one of the most reliable platforms in the Air Force in terms of its mission capability rates.” It may not have the range, capacity and speed that the CVLSP would bring to the table, but it flies when you need it to.

Add to this the fact that the budget contained virtually no money for CVLSP — doubtless saddening the folks at Lockheed, Sikorsky and AgustaWestland, all of whom had eyed the program — and you seem to see a sky full of tough old Hueys.

Expect howls or protest from Republicans about this. They think Obama is vulnerable on nuclear security issues. And doing nothing to improve the helicopter fleet responsible in part for keeping nuclear weapons secure as they are moved around is just the kind of policy a red meat Republican might want to use to beat Democrats with.