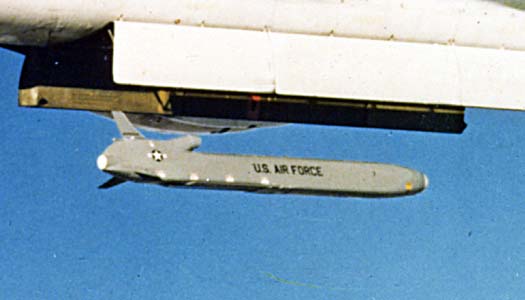 UPDATED: We Run Op-Ed; Pentagon Announces LRSO Contract
The Pentagon just awarded the third major contract in the modernization of the nuclear triad. First came the B-21 bomber. Then the Columbia-class submarine, to replace the Ohio class boomers. Two days ago they awarded Boeing and Northrop Grumman contracts to begin work on the new version of our Inter Continental Ballistic Missile fleet. there is one uncertainty in the nuclear modernization package: will America replace the Air-Launched Cruise Missile (ALCM) with a program known as Long Range Stand-Off. For the record, a number of senior Pentagon nominees have told Congress they support the program, but Defense Secretary Jim Mattis remains officially on the fence. Mark Gunzinger, respected strategist at the Center for Strategic and Budgetary Assessments, offers this analysis of LRSO.  Read on! The Editor.

UPDATE: Looks like we’re more powerful than we thought. Our op-ed ran and a few hours later the Pentagon issued contracts for development of the LRSO! Lockheed Martin and Raytheon were awarded $900 million cost-plus-fixed-fee contracts for LRSO’s technology maturation and risk reduction. Lockheed’s work will be done in Orlando, and Raytheon’s in Tucson.

The Defense Department acknowledges that America’s military is on the path toward becoming a hollow force. The signs: declining readiness, insufficient end strength, and aging weapon systems. It is also true that the Pentagon’s nuclear forces have absorbed more than their fair share of cuts since the end of the Cold War, including cuts that have eroded the ability of its bombers to support their strategic deterrence mission. The early termination of the B-2 stealth bomber program at 21 aircraft, about 16 percent of the original requirement, may be the most notorious of these decisions.

The Pentagon is now developing the B-21 Raider stealth aircraft to augment or replace some of its aging bombers. While this is progress, sustaining the air-breathing leg of the U.S. strategic triad is more than a matter of procuring a new bomber. Funding is also needed to replace the AGM-86B Air-Launched Cruise Missile (ALCM), which is now the U.S. military’s only air-launched, standoff attack nuclear weapon. Today, 35-year-old ALCMs are carried by 55-year-old B-52 bombers, both of which were never designed to penetrate advanced air defenses now fielded by Russia, China, and even Iran. The ALCM’s intended replacement is called the Long Range Stand-Off weapon (LRSO), which, according to the Air Force, will have the ability to “penetrate and survive advanced Integrated Air Defense Systems (IADS) and GPS-denied environments from significant standoff ranges.”

Some critics in Congress and various think tanks continue to question the need for the LRSO, claiming that it will be destabilizing or that the ALCM will suffice to meet future requirements. Another argument is the potential for other states to follow America’s lead and refrain from investing in nuclear weapons should the LRSO and other strategic triad modernization programs be cancelled. None of these arguments are compelling.

Proponents of the destabilizing school of thought tend to assert that the LRSO will be a first strike weapon. The United States has fielded multiple cruise missiles in past years that were capable of carrying conventional or nuclear warheads without causing destabilizing effects. In fact, bombers with nuclear cruise missiles and gravity bombs may be the most stabilizing element of the U.S. strategic triad. In a future crisis, the United States could signal its resolve and strengthen its deterrence posture by uploading its bombers with nuclear weapons or dispersing its B-52s, B-2s, and B-21s to increase their survivability.

As the 2008 Schlesinger Commission concluded, “if this stand-off capability is allowed to disappear, then the ability to signal strategic capability through the generation and dispersal of B-52s will be compromised.” Moreover, bomber crews that have launched from their airfields after receiving warning of a possible attack can be directed to withhold their payloads or fly their preplanned missions. In other words, LRSOs will not be “use or lose” weapons that increase the risk of a nuclear exchange.

Regarding the ALCM’s future viability, as with other guided weapons designed in the 1970s, it lacks the ability to penetrate modern air defense networks. In fact, concerns over its survivability caused the Air Force to develop the Advanced Cruise Missile (ACM) to replace the ALCM shortly after the ALCM became operational in the early 1980s. The ACM had stealth coatings, forward-swept wings, and other features to improve its ability to penetrate enemy air defenses. But with the end of the Cold War and for other reasons, DoD decided to end ACM production early, not replace its ALCMs, and then retire the ACMs it had procured. Nearly 35 years after the ALCM first joined the active force, DoD is ready to replace it.

Without the LRSO, B-52s, B-2s, and the future B-21 would need to deliver very short range nuclear gravity bombs on targets that are likely to be highly defended. This would require U.S. forces to either conduct a large-scale conventional strike campaign to first suppress an enemy’s air defense networks, or use a large number of nuclear ICBMs or SLBMs to achieve the same objective. U.S. air forces are not capable of the former in the middle of a nuclear exchange, and it is likely that our ICBM and SLBM force is wrong-sized (or would be an inappropriate means) to suppress numerous air defense systems that are highly mobile, camouflaged, or otherwise protected from attacks.

Replacing the ALCM with a conventional cruise missile is not a viable option either. Regardless of their degree of precision, long-range cruise missiles cannot carry large enough conventional warheads to destroy targets that are very hard or deeply buried. Very large conventional gravity bombs, such as the 30,000 lb GBU-57 Massive Ordnance Penetrator (MOP), may pack sufficient punch to destroy some hardened or deeply buried targets. However, they are also short-range, direct attack weapons, which means that bombers delivering them must fly close to targets that are likely to be heavily defended.

Finally, the argument that other countries would follow the United States’ lead and forgo nuclear weapons development or scale-down their existing inventories is specious, at best. Near the end of the Cold War, the United States maintained an inventory of more than 12,000 nuclear warheads on 1,875 strategic vehicles. Since 1990, multiple U.S. administrations seeking to “reduce the role that nuclear weapons in our national security strategy,” as voiced so eloquently by President Obama during his 2009 speech in Prague, chose to cancel, delay, or truncate nuclear weapons modernization programs. The United States is now on track to reduce its nuclear weapons inventory to 1,550 warheads and 800 total launchers by early 2018 in compliance with the New START Treaty.

This modernization pause gave America’s competitors the opportunity to field more advanced nuclear weapon systems or pursue an initial nuclear capability. China has increased the stature of its PLA Rocket Force, elevating it to a service-like status and providing resources to upgrade and grow the size its nuclear and conventional missile inventories. Russia is modernizing all three legs of its strategic triad, has fielded a new air-launched cruise missile, and is developing a stealth bomber. Russia also maintains a force of approximately 2,000 non-strategic nuclear warheads that can be delivered by a number of weapon systems, and it has breached the Intermediate Nuclear Forces (INF) Treaty of 1987, which bans ground-launched cruise missiles with ranges between 500 and 5,500 kilometers.

North Korea has developed number of nuclear warheads and is aggressively pursuing missiles and reentry vehicles needed to deliver them over intercontinental ranges. Although the U.S. Government has said that Iran is complying with the Joint Comprehensive Plan of Action (JCPOA) that went into effect in October 2015, Iran continues to develop and test long-range ballistic missiles and remains poised to develop operational nuclear weapons when the limits on its program expire in stages between 2023 and 2030. Clearly, the argument for “setting the example” by cutting the U.S. nuclear weapon inventory and planned modernization is based on a faith that is not shared by other great powers and their proxies.

In summary, the LRSO, along with the B-21, will help sustain the viability of the U.S. strategic triad well into the future. Without the LRSO, American bombers could be forced to penetrate highly lethal, short-range defenses to attack their targets during a nuclear exchange. Thus, the real alternative to foregoing fielding the LRSO would be the effective loss, in the long run, of the most flexible and stabilizing leg of the strategic triad. This would further erode America’s strategic deterrence posture and ability to meet its extended deterrence commitments.

Mark Gunzinger, a senior fellow at the Center for Strategic and Budgetary Assessments, served as deputy assistant secretary for forces transformation and resources. He has led the development of a number of strategic planning documents that have shaped DoD’s future force structure and capability priorities.