Why The Army Matters: Human Factors And Killing 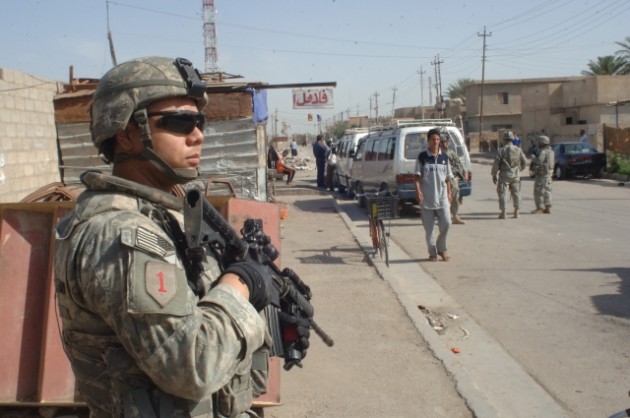 FORT BELVOIR: The intellectual ice is beginning to break. You could see it at the Fort Belvoir Officers’ Club on Tuesday afternoon, where the Army’s Training and Doctrine Command (TRADOC) hosted a three-day, tri-service conference on “Strategic Landpower.”

The US Army is wrestling with how to stay relevant once large-scale counterinsurgency in Afghanistan comes to an end. The Marines are going back to their roots — amphibious warfare — and they’ve got a piece of the hot concept called AirSea Battle. The Navy has little to worry about with the Pacific pivot highlighting the importance of the service’s global reach — and they’re central to AirSea Battle. The Air Force is still trying to figure out its real future but AirSea Battle gives the USAF a major role.

But the Army. Ah, the Army. After months, if not years, of debating opaque and often vague ideas such as “the human domain,” “prevent-shape-win,” “regionally aligned forces,” and “Strategic Landpower” itself, it now looks as if someone’s come up with a coherent case — and, even more important, they’re beginning to win over key civilians as well.

“The problem you have is, what’s the elevator speech for the senators on the appropriations committee?” said Lincoln Bloomfield Jr., chairman of the Stimson Center board and a veteran national security official. (While most comments were not for attribution, all the individuals in this article gave me permission to quote them by name). “Very few people understand what you do,” he told the conferees. “We need to be able to tell senators, journalists, presidents, civilians, why are we doing this, why is this important, why does this deserve a defense dollar in a tight environment.”

While this week’s conference was co-sponsored by the Marine Corps (cautiously) and by Special Operations Command (enthusiastically), it’s the conventional “Big Army” that has the most at stake. While the entire military is taking budget cuts, now painfully compounded by sequestration, only the Army faces an existential crisis. With the nation swearing off large-scale counterinsurgency “forever” (for the second time since Vietnam) and no hostile conventional army on the horizon, what does America need large ground forces for?

Within the Army itself, that question turns into a debate over the service’s core competency, indeed its very identity. The rapidly shrinking service wants to somehow both preserve its hard-won people skills — language, culture, uprooting underground networks, winning over tribal leaders and local militias — and rebuild its ability to wage big-gun blitzkrieg. But which should approach should it focus on after we pull out of Afghanistan in 2014?

The obvious answer — “do both” — is a hard case to make in tight budgetary times. It’s not impossible. A small but smart cadre within the Army has been arguing that touchy-feely human factors and hard-charging combat ops are synergistic, not separate. Instead of being parallel efforts, they must converge into a single 21st century way of war. In this analysis, the two sets of capabilities are not in competition; they are not separate-but-equal (or unequal); they are not even merely complementary; they are yin and yang, soft speech and big stick, each utterly essential to the other.

Why so? Tactically, enemies with sophisticated weapons and social media savvy are increasingly able to hide among the globe’s ever-growing population. Rooting them out will take both serious firepower and a fine-tuned sense of whom not to shoot, lest you turn passive bystanders into active enemies. Conversely, if you play your human factors right, or at least better than the enemy, you may turn some locals into active allies.

Strategically, peacetime engagement around the world may not always prevent war, but it can give us better intelligence and local contacts if war breaks out. Training friendly militaries can make them more capable of helping us when and if the shooting starts — and those foreign forces want to work with and learn from us in the first place because they know that we’re very good at shooting.

Now it looks as if that argument is getting traction not only in the Army but in the civilian policy elite as well. “I’m not persuaded that understanding the human [factor] is going to make land forces more capable of preventing conflicts,” said Kori Schake, a senior official in George W. Bush’s National Security Council who’s now at the Hoover Institution, “but you guys actually have persuaded me that a better understanding of this will actually make our combat force more effective and more resilient.”

“[Understanding] human behavior is not just influencing it to prevent conflict, it’s influencing it appropriately in conflict,” agreed Maj. Gen Bill Hix, chief of staff of the Army Capabilities Integration Center (ARCIC), which has playing a leading role in developing the Strategic Landpower concept.

“Lethality is a key component of credibility in engagement,” Hix said. “People have to smell, touch, fear that capability.” He recalled being told by one foreign defense official that “we don’t invite you to our country because we necessarily like you, [but] we’d rather be on your side.”

The yin-and-yang of human factors and high explosive is crucial to the argument, both intellectually and politically. Foreign engagement missions are enough to justify SOCOM’s 18,000 operators — indeed, SOCOM is overwhelmed and wants the big Army to help out — but Congress won’t fund hundreds of thousands of conventional soldiers to do engagement missions alone. Conversely, if the Army’s mission is purely to “kill people and break things,” many policymakers would argue that’s done more safely and effectively from the air, not by putting thousands of young Americans on the ground.

If combat power and human factors are not inseparable, then you might as well rely on small SOCOM teams for engagement, rely on drones, cruise missiles, and stealthy strike aircraft for lethal action, and slash the regular Army to the bone. Indeed, just last week the Army Vice-Chief of Staff, Gen. John Campbell, told me that “there’s talk about bringing the Army down to levels that are pre-World War II.”

That’s why the Strategic Landpower project is putting together a case that you need substantial, combat-ready, people-savvy forces on the ground, able to conduct operations and gather intelligence amongst the local population, instead of trying to do it all from 50,000 feet in the air.

“This to me is a great starting point for a warning and an exhortation,” said Maj. Gen. Tony Cucolo, commandant of the Army War College, speaking of the Strategic Landpower white paper signed by the chiefs of the Army, SOCOM, and the Marine Corps. “It’s an exhortation to capture the incredible progress made over the last decade… It’s a warning, at a moment in time when budget decisions may imbalance the joint force, [that] if we spend several years financing the lure of strike, the ground capability would wither.”

Edited 8:10 am on Thursday, 29 August to attribute and expand the quotations from Major Generals Hix and Cucolo.