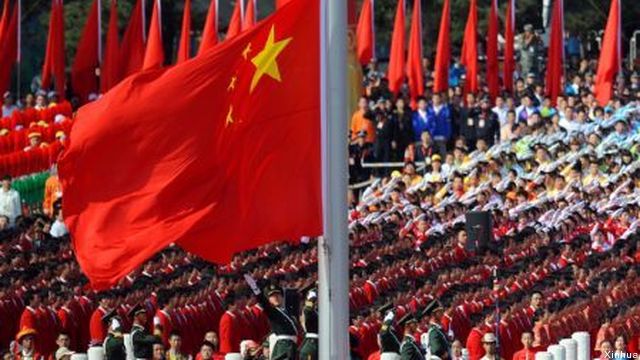 The Chinese are very likely headed for a hard economic landing. This economic dynamic is coming in the context of a massive generational political transition within China itself.

The two will intersect with each other to shape the evolution of China, Asia and the world beyond.

During 2012 and 2013 the generational change will reshape China’s leadership. At the same time, Chinese economic growth is slowing markedly, ending decades of double-digit economic growth.

Under Communist leadership, China’s economy was long powered by exports to the rest of the world, but China’s international competitiveness has recently been eroded by rising costs of labor, materials and energy.

Foreign demand for China’s exports has dramatically weakened as a result of continuing global financial crises set in motion in 2007 and 2008. China’s domestic demand is not yet strong enough to pick up the slack from faltering exports.

At home, China’s financial bubbles in real estate and commodities are bursting, its banking system is crumbling under the weight of massive misallocated and nonperforming debt, and its peoples are suffering from inflation in food, fuel and daily essentials.

Around the world, investors are now considering whether China’s economy will have a hard landing, or just a period of slower economic growth.

The answer depends in part on whether or not the world economy experiences stronger recovery from the financial shocks of the last few years.

But the answer also depends upon how quickly the new leadership can agree on, and implement, new economic policies to address severe stresses on the economy.

This in turn depends upon whether the political transition is smooth, or whether China will experience a lengthy period of turbulent power struggles among the many new leaders who will take over from their predecessors.

Based on dealings with the Chinese investor class, it is very clear that there is every prospect of a hard economic landing. In the last few years in China there has emerged an array of autonomous private investors that I refer to as China’s “investor class.” This includes high net worth families and managers of giant investment funds as well as individual entrepreneurial families.

Their individual and collective wealth has growing influence on how China’s economy functions, and therefore on how the political superstructure functions.

The “investor class” has not been given much attention by foreign press, media, academic economists, or market analysts.

One reason may be that the investor class has only in recent years become a significant segment of the Chinese economy, with many of today’s asset managers and senior traders relatively young, and the elder high net worth individuals reluctant to operate transparently.

Direct discussions with many of the Chinese “investor class” families reveal a widespread worry that a troubled transition of leadership will distract attention of the government and impede orderly implementation of new economic and financial policies.

Very broad, generational turnover of leadership is taking place at the same time as the Chinese economic engine is faltering. There are widespread fears among China’s investor class that political power struggles may interfere with timely economic policy decisions in response to domestic and global slowdown.

Power struggles may distract the most senior levels of government, especially during a period of transition when a “learning curve” will prevail as new leaders experience interaction with each other and with each other’s power base.

Such fears have already been given validity by the events following the fall of Chongqing’s Communist Party leader and Politburo member Bo Xilai, and questions about his wife’s involvement in businesses and conflicts with foreigners, and allegations of involvement in murder of a foreign business partner.

Allegations of corruption at such a high level of governance have highlighted public concerns about disparities in treatment of powerful families in contrast with treatment of ordinary citizens before the law.

Making matters even more complex, one of the principal political supporters of Bo Xilai has been Zhou Yongkang, one of the nine members of the Politburo Standing Committee, whose personal responsibility is to oversee the security and law enforcement apparatus of the entire nation. If his authority were to come into question, the credibility of the nation’s laws and law enforcement would also come into question.

Moreover, this role as overseer of security and law enforcement implicitly encompasses extensive awareness of the extent of corruption and aggregation of wealth – including wealth that may have been positioned outside China. If the overseer of such information is perceived as favoring or shielding privileged members of the power structure at either national or local levels, this could open a chain reaction of yet additional power struggles not only among leaders but also among the wider populace.

The extraordinary downfall of Bo Xilai and the implicit power struggle behind pose acute embarrassment for both the outgoing and the incoming Chinese leadership, because it raises questions about the moral authority and “legitimacy” of the central government and of the Central Committee of the Communist Party.

Eventually, as the debate continues about Bo’s bold “red revival” and the alternative of incremental relaxation of central control, it is likely that questions will arise about the relative effectiveness of such alternatives.

Greater public controversy can also be expected about the extent to which corruption is implicit in the harsh selection of winners and losers in the ‘red revival” scenario.

China’s “collective leadership” will change along with generational change in the next few years.

Will internal strains be manageable if the economy’s performance proves disappointing to the people of China?

Within China, will there be a reversion to previous hard line Cultural Revolution dictates or will China’s decision system continue its recent path towards collective leadership in support of an increasingly diversified, entrepreneurial, innovative society?

Externally, if the Communist Party leadership finds itself paralyzed by faltering economic growth and domestic controversies over unfairness and injustice, will it need to divert the public’s attention to conflicts with other nations, particularly with neighboring nations such as India, Vietnam, and Japan?

Will the PLAd to enable itself to project power beyond China’s neighborhood, ostensibly to protect China’s supply lines with Africa and the Middle East, and even beyond?

Will China’s leadership be able to exercise multilateral leadership on a global scale, supported by its vast accumulation of foreign currency reserves, or will those reserves have to be drawn down to help levitate a failing domestic economy?

Ultimately, the rest of the world not only awaits the outcome of this major transition in China’s leadership, but its impact on the global economy.

Can China’s new leadership think globally or will it be forced by daunting domestic challenges to remain focused on domestic survival for the next several years?

Harald Malmgren is an expert on world trade and investment flows. He served as chief U.S trade negotiator under both Presidents Nixon and Ford. Since 1977 he has been adviser and strategist to international corporations, banks, investment banks, and sovereign wealth funds. He has also advised finance ministers and prime ministers of a number of governments around the world. This commentary is excerpted from a new report, Strategic Inflection Points.