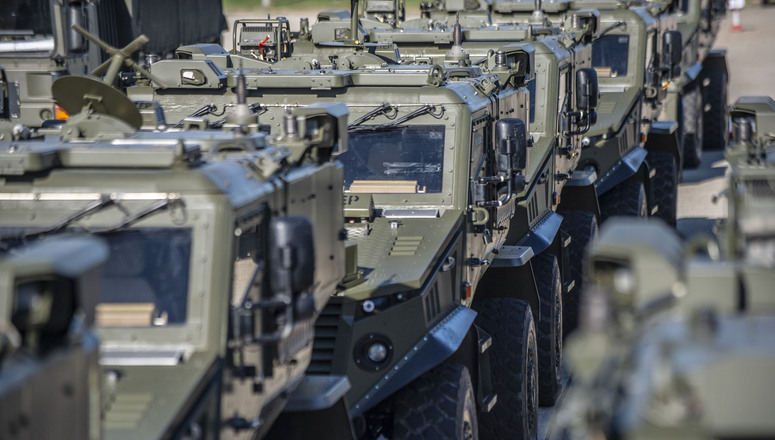 70 Foxhound, Husky and Landrover vehicles make 2,000 km journey through the Netherlands, Germany, and Denmark to Sweden during Trident Juncture 2018 exercise

The Cold War has not returned, but the Russians have. European disaggregation is clearly underway and Vladimir Putin is clearly working to leverage the growing fissures.

The challenge for the Trump Administration is less about whether the US cares about European defense; it is much more about a strategic shift of American attention to dealing with the more direct threat to the United States posed in the Pacific by North Korea and China.

NATO underwent a significant change from a core focus on collective or direct defense to crisis management against non-peer competitors and to building forces for the land wars in the Middle East. Three US Administrations certainly drove NATO in this direction looking for allies to engage in the Middle East and to sort through ways to have new crisis management burden sharing arrangements.

The only problem is that we collectively altered NATO and European forces in a direction, which is of less relevance to the challenges facing the Europe.

Nowhere is this truer than with regard to Germany, which has an underfunded military with very low readiness. Their current situation leaves a yawning military gap in the heart of Europe.

In a recent trip to Germany, I spoke with recently retired senior Bundeswehr officers and officials about the state of the German military and their concerns about how Germany was going to play an effective role for NATO’s conventional deterrence to be credible against Putin’s Russia. They focused on how Germany could enable an effective direct defense role in the years ahead, but they were worried that the effort was too little and too late for them to help offer a credible conventional and nuclear defense within Europe.

Their broad point was that until 1996 the Germans had a solid force capable of providing for territorial defense, one able to provide crucial logistical support for NATO forces to operate from Germany. That is no longer the case. Germany’s military infrastructure – including communication systems — have been dismantled and not replaced, leaving them incapable of building the infrastructure for direct defense against an adversary who has prioritized significant strike systems against NATO Europe.

A good example of the persistence of past and outdated thinking is that the central Eurofighter support center in Germany is built above ground because building reinforced bunkers is too expensive. There is no active defense; there is no bunkering of parts or anything remotely connected to the needs of the return of direct defense.

Obviously, the Germans are not alone in this mindset and there is the broader question of how Europe will  rebuild this infrastructure. Railway gauges between the former East and West Germanys do not match. And railway bridges can’t support the weight of military cargos such as tanks and artillery without crushing them.

As one retired Bundeswehr general put it: “NATO has the longest border in its history, but where are the forces which can move rapidly to the threat of a Russian leader who clearly hopes to pressure Europe at points of his choosing?”

It was very clear from discussions during my visits to Finland, Norway and Denmark over the past three years that the return of direct defense is not really about a return to the Cold War and the Soviet-Western conflict. Direct defense has changed as the tools available to the Russians have changed, notably with an ability to leverage cyber tools to leverage Western digital society to be able to achieve military and political objectives with means other than direct use of lethal force.

This is why the West needs to shape new approaches and evolve thinking about crisis management in the digital age. It means that NATO countries need to work as hard at infrastructure defense in the digital age as they have been countering terrorism since September 11th.

Put in other terms, robustness in infrastructure can provide a key element of defense in dealing with 21st century adversaries, one as important as the creation of classic lethal capabilities. Germany has agreed to provide the core logistics hub for NATO at the German city of Ulm. Will this be a logistics hub based on the Fed Ex principles of the last 25 years? Or will it be one designed with the Russian strike force as the central threat?

The German government has pledged to increase its defense spending and shape new capabilities by 2031. Yet the German economy at the start of 2019 faces serious signs of slowdown. As Harald Malmgren wrote recently:

The primary engine of the German economy has long been its industrial exports, accounting for almost half of Germany’s GDP.  World trade has now slowed to a crawl and looks likely to remain slower than at any time since World War II.  China, Germany’s primary growth market, no longer wants industrial machinery from Germany now that China is producing the same types of industrial goods it used to import from Germany.  In the years ahead, China will try to wrest away much of the German export markets by offering Chinese alternatives. Germany’s economy may continue growing in the coming decade, but at a far slower pace than experienced in the decades since the 1950s.

Will German political leadership give priority to military security when the economy is weakened? And will Germany turn inward and abandon its leadership role in management of the European Union and the European Monetary System, embodied in its Euro currency.

Will Germany’s political center of gravity drift towards greater nationalism, with diminishing interest in the security of its European neighbors?

Germany’s financial commitment to defense will likely be challenged by these shifting domestic political priorities. Plus 2031 is a long way off. And Russia is not sitting still. As a German colleague put it: “Unless we have an agreement with Putin to sit on his hands until the 2030s, what exactly are we going to do in the meantime to act against the Russians.”

In my discussions in Germany, several questions were raised which highlighted some of Germany’s challenges.

As one senior procurement official put it: “We don’t really know what to buy because we don’t know what our interests are.”

Another senior retired Bundeswehr general put it bluntly: “Most of our politicians have not really grasped that German defense lies in the Baltics and in what we used to call Eastern Europe.  What can we bring credibly to the fight now, and in the near future?”

Senior Luftwaffe generals have clearly indicated that the state of the air force is nowhere near where it needs to be. Two examples suggest the problem.

One illustration is that after training to fly the Eurofighter, it takes at least two years before the pilot has a combat aircraft to fly.

A second is the nature of the logistics system itself. When the Germans take a Eurofighter in for deep maintenance its Air Force must wait 300 days for it to come back from industry to fly again.

Several air forces are looking to develop new air systems after the F-35 in that time frame, such as the US Air Force, the Japanese and the British, but all of those will pass through the F-35 interoperability transformation which is already under way among Germany’s Northern European neighbors.’

The air modernization problem, combined with the short to mid-term contribution of Germany to deterrence today, really is about two key items.

First, the Germans need an aircraft which can integrate with mobile air defenses and reinforce defenses at the perimeter of Europe, not just fly at “air shows and do air policing,” as one senior retired general put it to me.

The second is to have a useful nuclear-capable aircraft which can keep Germany involved in the nuclear equation, something which some coalition partners in the current German government would be happy to see go away. The current mission is accomplished by the aging Tornado, an aircraft which the British will retire soon; the last one left the Middle East just recently.

The Tornado replacement decision really is at the heart of the near to mid term credibility of Germany’s military. The British are replacing the Tornado with their own version of a “system of systems,” that includes the advanced Eurofighter (reworked to be interoperable with the F-35), the F-35 and new weapons systems.

For Germany, the Tornado replacement issue entails a number of questions and challenges. First, will Germany remain part of nuclear deterrence by participation in that mission? How can they do this with an aircraft which would be destroyed trying to fly into contested airspace?

Second, will the Luftwaffe work with the RAF, British industry and the British government to get access to the UK Typhoon and ensure that its capabilities flow into the projected new German “Tranche IV” Eurofighter?

Third, how will the Luftwaffe replace the integrated ground attack capabilities of Tornado not done by Eurofighter?

Fourth, how will the Luftwaffe ensure that it can operate with F-35s?

Two recent Luftwaffe chiefs, Karl Müllner and Klaus-Peter Stieglitz, made it clear that German credibility is at stake in an op-ed published in Die Welt last week. This requires doing more than simply finding answers to how to deal with its industrial interests or its pique with Donald Trump:

Due to its age, the German contribution to the Tornado has already lost credibility. The discrepancy will be even greater as the F-35s become operational in Italy, the UK, the Netherlands, Belgium and Turkey within a few years.

If the German contribution continues to be untrustworthy or can no longer be provided, this would also have negative effects on the strategically indispensable US guarantee and the nuclear disposition of NATO because of the resulting imbalance in the risk and burden sharing in NATO.

A termination of the NATO-Russia Basic Act and the stationing of nuclear weapons in Eastern Europe could be the result. When deciding on the successor to the Bundeswehr’s Tornado fighter plane, it is not just an important military decision with a European political and industrial significance, but a strategic decision with an impact on the European security order as a whole and Germany’s role as a leading nation.

If Germany sticks with the path it has now taken, it will leave the circle of security leadership nations in the EU and NATO, degrading itself to become a secondary support force.

It is necessary and corresponds to responsible policy for our country to deal with the issue of succession to the tornado of the Bundeswehr once again objectively and with the necessary strategic vision and to revise the decisions taken so far.