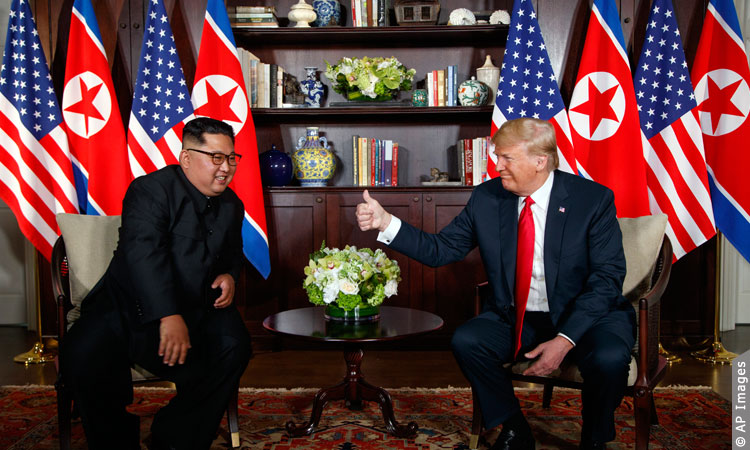 President Trump announced that the United States would stop flying bombers over South Korea and suspend exercises there to facilitate diplomatic negotiations with North Korea. This echoes President Johnson’s March 1968 decision to halt the bombing of most of North Vietnam, also done to encourage negotiations.

In 1968 the effort succeeded, at least in the short term, since the North Vietnamese agreed to talks. But in the long term, having already received a substantial concession, they had no incentive to make the talks productive. It took another bombing campaign to force a settlement. Meanwhile, the US war effort took a hit and, ultimately, ended in failure. US allies hoped for peace but increasingly feared abandonment and needed a lot of reassurance. As the United States enters a new round of negotiations with the determined communist country, it might learn from this experience.

It’s worth reviewing history here. In March 1968 a war weary United States was looking for a way to end the conflict In Vietnam. The Tet Offensive, a massive attack by local guerillas and North Vietnamese regulars, had occurred in January and February. Operationally, the communists suffered terribly. Their forces had come out of hiding and been smashed by allied firepower. The expected rising of South Vietnamese against their government had not occurred. However, the attacks were a strategic victory because images of communist sappers penetrating the U.S. embassy compound showed a clever and still-dangerous enemy. The U.S. public feared that there was no “light at the end of the tunnel.” And Walter Cronkite, the most respected journalist of the time, publicly despaired of victory.

Allies in the region recognized the dangers of continued war and supported a negotiated peace, but feared the consequences of a US withdrawal. The notion of a “domino effect”— that communist victories in Vietnam would cause other countries to fall — was plausible, given the experience of Eastern Europe and the ideological assertiveness of Mao’s China. Thailand, Taiwan, the Philippines and Malaysia all felt threatened. Even relatively distant Australia felt threatened enough to send troops to Vietnam.

So how is this all relevant now? It’s worth looking at warfighting impact, negotiations and the allies.

Halting exercises on the Korean peninsula was a major concession by the United States. The US and South Koreans have held two major field exercises every year (currently called “Key Resolve/Foal Eagle” and “Ulchi/Freedom Guardian”) and many smaller ones, such as bomber deployments. In the short term, the effects will be modest. Missing one exercise will not cripple forces, given the expertise built up over decades of joint exercises and the strong unit-level training that both militaries possess. Apparently, those lower level exercises will continue. With time, however, the negative effects build. Units and personnel will turn over; replacements will lack the experience of joint exercises; their skills will degrade. Field training is especially important for multinational operations, where forces must learn to maneuver together, mesh command and control systems, and align different military and political cultures. So, clearly, time is on the North Korean side.

The prospect of negotiations with North Korea has been catnip for the commentariat. They bat around ideas about strategy, advantage, and prospects for success, becoming intoxicated with the opportunities and risks. There’s no point in engaging in that kind of speculation. What is clear is that the agreement signed by Trump and Kim is vague and aspirational (lots of “committed to…” without details). It begins a process but does not, in itself, represent progress.

Secretary of State Pompeo and national security adviser John Bolton are headed to North Korea to continue the talks. Both are hardheaded individuals unlikely to prolong negotiations just to keep the diplomatic process alive. However, between the president’s enthusiastic statements and the expectations built up from the frenzied speculation, there’s tremendous global pressure to agree on something. Conversely, the North Koreans, like the North Vietnamese 50 years ago, have every incentive to stall. With the current status quo, they acquire a military advantage, drive a wedge between the United States and its allies and gain international status for being a small country negotiating on an equal basis with the world’s only superpower.

A wave of anxiety has rippled through our allies. They clearly prefer diplomacy to the war fever of last September. However, the unilateral and abrupt nature of the negotiations makes them nervous. Japan and South Korea fear an agreement that leaves them vulnerable to regional missile threats by North Korea but that safeguards the continental United States by curbing long-range ICBM development.

The prospect of the United States reducing or removing forces from the Korean Peninsula, which Trump dangled at the press conference, makes allies especially concerned. This resonates with an element of the US electorate, both left and right, who see overseas commitments as expensive and entangling United States in other people’s problems. But withdrawal would contravene 70+ years of alliance relations and undermine deterrence.

It’s hard to see a way forward on troop reductions short of a major shift in strategy. Even if North Korea’s nuclear capabilities were to go away, their large conventional capabilities would still threaten the region. The United States had forces in South Korea for 50 years before the North Koreans demonstrated a nuclear capability. Considering the huge cost of the last Korean War, the 28,000 US service members currently stationed in Korea offer a relatively cheap insurance policy against another conflict.

That does not mean that all change is unacceptable. The force posture in Korea has evolved and declined over time as the South Koreans have become increasingly able to conduct their own defense. One could imagine the United States increasing its contributions of firepower over time — air, ground, and naval — while leaving more of the ground commitment to the South Koreans. Similarly, one could imagine a deal, formal or informal, whereby the US stops major exercises and the North Koreans stop missile and nuclear weapons testing. Such changes require close work with allies be sure that they understand the new arrangement and structure their forces appropriately.

So the clock is ticking. The United States does not have a lot of time to find out whether the North Koreans really mean to “de-nuclearize” (whatever that means) or whether, like the North Vietnamese, they are just accepting a concession with no intention of reciprocating.

It is worth remembering that the 1968 bombing halt failed. Negotiations went nowhere until Nixon launched a ferocious wave of bombing in 1972 (called “Linebacker II”) that drove the North Vietnamese to the bargaining table. Ultimately, even that was not enough, since the North Vietnamese violated the peace agreement and overran an abandoned South Vietnam. Shortly after the fall of Saigon, the United States used military force to recapture the merchant ship SS Mayaguez that had been seized by Cambodian communists. As a military operation, it was poorly executed and perhaps unnecessary, but it made a strategic point: the United States was not abandoning the region.

Mark Cancian, a member of the Breaking Defense Board of Contributors and a former senior staffer at the Office of Management and Budget, is a defense expert at the Center for Strategic and International Studies.